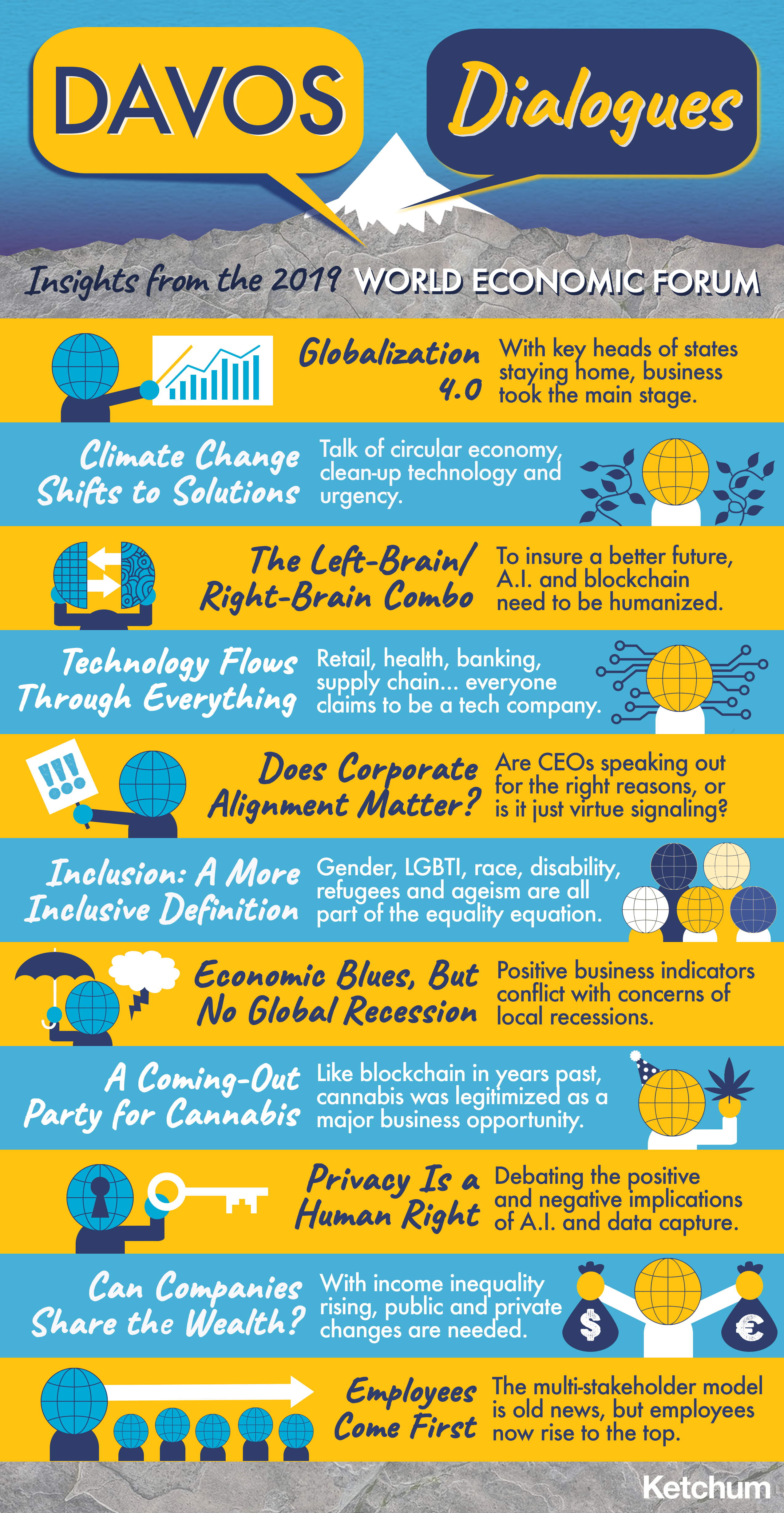 With a significant drop in world leaders attending, the 2019 World Economic Forum in Davos took on more of an activist bent, with attendees calling for action to combat problems like climate change, income inequality and privacy breaches.

“We actually saw issues taking center stage this year,” Ketchum president and CEO Barri Rafferty said during the agency’s annual post-Davos webinar earlier this week. Forbes estimates that together these “no-show” leaders represent countries that account for half of the global economy and 42% of the planet’s population, she said.  “In my mind this year, it gave the corporations and CEOs and others a chance to step in and, in some cases, the NGOs and activists had a stronger voice.”

Case in point: climate change. Rafferty, in conversation Holmes Report editor-in-chief Arun Sudhaman, noted that while climate change has been a Davos topic for years, the conversation took on a markedly different tone this year, as attendees stressed the need for finding solutions with greater urgency. The topic drew activists, from Sir David Attenborough, the 92-year-old broadcaster and naturalist, to 16-year-old Swedish student Greta Thunberg, who told attendees, “I want you to feel as it the house is on fire, because it is.”

It’s an issue that brands in particular have rallied around, Rafferty said, adding that in taking steps to protect the environment companies are not only doing good but also have opportunities to boost their relationships with consumers. The launch of a project called Loop, a business-driven initiative to replace plastic with reusable packaging, which consumers would return with little effort, was one of the biggest announcements to come out of the forum, she said.

“Instead of the relationship ending as soon as a product is purchased, the consumer becomes an ongoing user of the brand," Rafferty said. “There’s an opportunity there for brands to reinforce the value of their customers, as their participation is key to the success of a circular system.”

Technology also permeated Davos discussion, taking shape in a number of forms. “The serious issue here is we are clearly seeing technology disrupt every aspect of the business world,” Sudhaman said.

For communicators, takeaways include the need to rethink storytelling given the ubiquity of technology across the business world. “As every company becomes a tech company, brand storytelling should shift to a focus on the technological innovations that make the company not just a leader in its industry, but a pioneer for other industries to follow,” Rafferty said.

Communicators also have to be duly prepared for the risks that come with technology being so pervasive — risks like data breaches and job losses due to automation.  “Communicators should be prepared for these risks, which are no longer limited to tech firms but to all brands and all companies,” Rafferty said.

Technology has other ramifications, too, giving rise to another issue that was top-of-mind at Davos: privacy — or, more specifically, the idea of privacy being a human right in an age of artificial intelligence and data capture.

In actuality, the world is grappling with that issue in vastly disparate ways. “Microsoft CEO Satya Nadella praised GDPR (the EU’s data privacy regulation) and said he hoped the world will eventually agree on a common standard that preserves the right for people to own and control their personal data,” Rafferty said. Japanese Prime Minister Shinzo Abe talked about using his country’s hosting of the G20 as an opportunity to advocate for international guidelines on data usage.

That, however, is in contrast to China’s proposed plan to implement a social credit system, which gathers personal data of its citizens and assigns them a score based on their behavior, trustworthiness and other factors. Facial recognition technology is also concerning, Rafferty said, with downsides running up against positives like finding missing children and diagnosing rare diseases, Rafferty said. Joy Buolamwini, an MIT computer scientist, said there is inherent bias, too, as algorithms frequently misrepresent facial recognition of dark-skinned people.

Issues surrounding bias, diversity and equity were imbued in other key themes this year.

Among them: the idea that business has to have a more inclusive definition of inclusion. Gender, LGBTI, race, disability, refugees and ageism are all part of the equality equation now, Rafferty said, changing the scope of business’ challenges, which, at Davos, traditionally focused on gender parity. “I anticipate that the focus on women will continue for years to come, but what I’ve really noticed this year is that the focus on diversity and inclusion has broadened to a discussion of inclusivity for all,” she said.

Ketchum parent company Omnicom has launched a range of initiatives to further that, including efforts to get hundreds of other companies to commit to adopt UN Standards for LGBTI Human Rights and promise to make disability part of their diversity and inclusion programs.

Equality, however, is an economic issue, too, and as income inequality is on the rise, companies can expect calls for them to share the wealth, Rafferty said.

Oxfam’s annual research, released in Davos, found that the world’s top 26 billionaires have as much wealth as the poorest 3.8 billion people — that is half the planet. The wealth of the world’s billionaires increased by 12% last year, or $2.5b per day, while the poorest half of the world lost 11% of their wealth in the same time frame, she said. 10,000 people die per day due to lack of healthcare, and there are 262 million children not in school, often because their parents are unable to afford the fees, uniforms or textbooks, she said.

"Many believe governments need to step up, implementing more fundamental social services, higher taxes on the wealthy or universal basic income,” said Rafferty. "But Davos is all about public-private partnerships – if governments can’t be responsible for everything, then businesses need to step up.”

The larger economic outlook — and whether we’re heading toward a global recession — was another recurrent theme. Rafferty said that despite economic pessimism, and rising risks due to the world economy growing slower than expected, most believe we won’t see a global recession in 2019. Local recessions are far more likely, including in the US which is at significant risk in 2020. Slowdowns in China, the possibility of a no-deal Brexit, fading benefits from US tax cuts, and threats of full-blown global trade wars underpin these assumptions, Rafferty said.

Economists, however, warned about being too bleak about the future, added Rafferty. On a global basis, Bank of America economist Michelle Meyer said recession predictions are premature, and that current pessimism is more about the pressures business leaders are feeling right now. KPMG US CEO Lynne Doughtie also warned about the dangers of being too pessimistic, saying that negativity could lead to a self-fulfilling prophecy despite data suggesting that elements of the US economy are strong.

Discussions at Davos (where some of the most popular business leaders “are treated like rock stars,” Rafferty said) also explored corporate activism, affirming that CEOs have to be authentic in taking stands on issues, and make sure their actions are aligned with their companies values.

A study from the Young Presidents Organization, furthermore, suggested that employees truly do come first. The study found that that shareholders rank fourth in shareholder prioritization, which was topped by employees, customers and leaders' families in that order.

In addition, cannabis was legitimized as a major business opportunity — despite marijuana companies still being banned from Super Bowl advertising and ringing the bell at the New York Stock Exchange. “So while the first appearance at Davos signals a legitimizing of this formerly taboo industry, cannabis companies still have an uphill climb in more conservative markets,” Rafferty said. “I wouldn’t be surprised to see cannabis on the official WEF program by Davos 2020.”