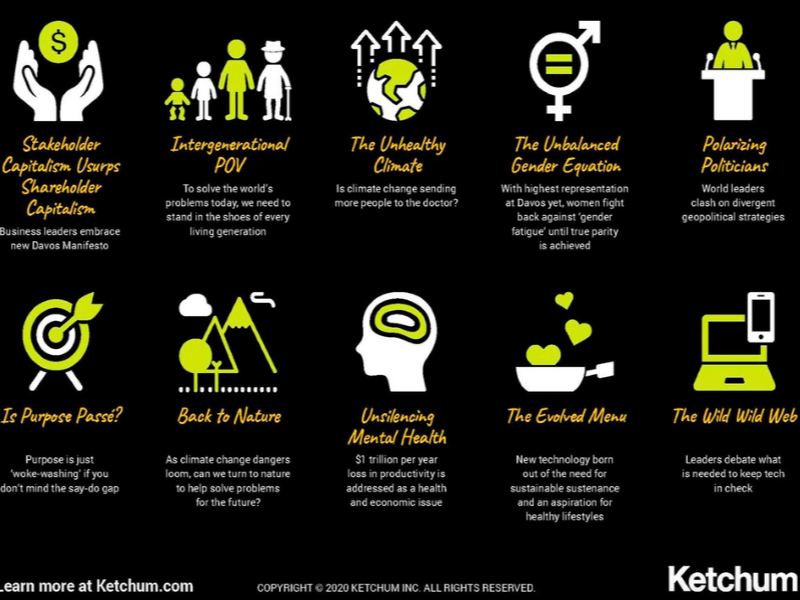 While discord and instability certainly cast a pall over last week's World Economic Forum in Davos, there was no mistaking the energy with which government and business leaders, along with youthful activists, grappled with intense global issues, amid the gnawing reality that conversation alone will not solve the world's most pressing problems.

“I found the mood to be interestingly mixed this year. There are people who were more optimistic about the economy, and then other people who were very worried about trade agreements and … a shift back to nationalism and what does that mean,” Ketchum president and CEO Barri Rafferty said during the agency’s annual post-Davos webinar earlier on Wednesday.  Grave concerns about the climate crisis in particular loomed large. “There’s a little more fear and worry about what’s going to happen in our world for sure."

All of which helps explain one of the key takeaways from Davos 2020: Capitalism, in its current incarnation, is not working for everyone. A rethink is required so that it serves more than the bottom line, in line with last year's Business Roundtable statement.

That thesis is reflected in this year’s Davos Manifesto, which reads: “The purpose of a company is to engage all its stakeholders in shared and sustained value creation. In creating such value, a company serves not only its shareholders, but all its stakeholders – employees, customers, suppliers, local communities and society at large. The best way to understand and harmonize the divergent interests of all stakeholders is through a shared commitment to policies and decisions that strengthen the long-term prosperity of a company.”

Rafferty, in conversation with Holmes Report CEO and editor-in-chief Arun Sudhaman, said the idea of “conscious capitalism” permeated the WEF, with a particular focus on companies proving their commitment purpose — in terms of measuring the impact through concrete metrics that gauge social, environmental and government influence, in addition to just profit. “They are trying to find some ways to hold people accountable,” she said.

The push for accountability was encapsulated by the presence of young activists, who  were far more prominent than previous WEF editions. “What I loved is the strong voices,” said Rafferty, of young people such as Greta Thunberg, the teenage climate advocate. “In order to stay influential and relevant, the leaders of countries, of NGOs, of companies, really need to understand the agenda of the  younger generation, need to listen and put themselves in the shoes of the younger generation.”

Their voices were a particularly compelling, and influential, component of WEF’s focus on climate change — which was not only one of the most discussed topics, but was actually reflected in Davos itself, where the temperature rose to nearly 50 degrees Fahrenheit.

Rafferty said climate change permeated discussions across industries, but for the first time included an emphasis on the dire health risks caused by global warming — heatwaves and other extreme weather, malnutrition resulting from food scarcity and in utero complications from pollution to disease. Australians breathing air polluted by the wildfires there are inhaling the equivalent of 19 cigarettes a day, Rafferty said.

Meanwhile, the presence of polarizing politicians including Donald Trump and Carrie Lam (another one of this year’s themes) refocused the spotlight on how business’s can tackle political issues. In one conversation, former Danish prime minister Helle Thorning-Schmidt told Microsoft president Brad Smith that companies have to help. “There is opportunity business has to play a more responsible role,” Rafferty said. “People don’t trust politicians.”

Using nature to help remedy the environmental problems we’re facing emerged as a new focus of Davos this year, Rafferty said. Trees and reforestation, for instance, can play a major role in curbing climate change by removing carbon dioxide from the atmosphere. While at Davos, global government and business leaders backed an initiative to plant onetrillion trees by 2030 (although critics point out many of those same leaders won’t back more costly propositions, like a carbon tax).

The importance of addressing mental health, for both employee welfare and economic reasons, garnered interest across industries, with business only recently acknowledging how much productivity is lost to such illnesses. Elsewhere, issues surrounding food and technology — the environmental impact of farming, nutritional deficiencies and food waste — were an unexpected WEF focus, Rafferty added.

Technology again served a lightning rod for broader concerns about economic disruption. Tech leaders spoke of the need for more regulation in light of the growth of AI and concerns about data and privacy. “Google and others said the industry should not self-regulate,” Rafferty said. They also called for the creation of a global set of principles that would provide the framework for the safe and ethical use of new technologies.

“You continue to see (fear of) surveillance, dystopia. We are afraid of tech addiction and what that means to young people. We are afraid of all the data they are collecting,” Rafferty said. "Yet figuring out how to regulate that and control that is something I did not see resolved.”