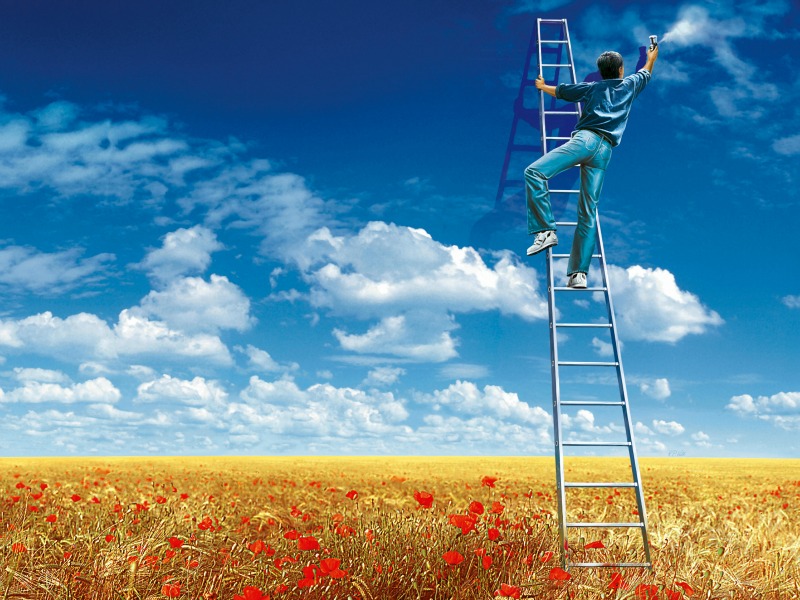 On Inspiration And Perspiration

Under 50% of the world’s population would describe themselves as creative and only 1 in 4 people believe they are living up to their creative potential.

Shockingly, under 50 per cent of the world’s population would describe themselves as creative and only 1 in 4 people believe they are living up to their creative potential. [1]  Simple maths (and a couple of assumptions) means that we collectively believe that only about 13 percent of the world’s population are delivering almost all the creativity we see in today’s world.

If you take more than a few seconds to think about that, you know that can’t be right.  The exponential rate of change in so many sectors and societies depends on more creative brains than that 13 percent can possibly provide. So what’s the rub?  Why do people think they aren’t being creative?

At heart, I think this is a definitional problem: we vastly exaggerate the weight of inspiration in the creative process, and under value the sheer importance of perspiration.  Perspiration not only comes after creativity (making your big idea happen), but also often needs to come before it, ensuring that “big idea” occurs in the first place. Time and time again, if you look into some of the world’s most creative business people – the ones who have delivered fundamental and often paradigm shifting change – they emphasize the importance of perspiration in getting them there.

10,000 hours
Developing creative solutions to a problem usually (although not inherently) relies on a deep understanding of the field, its context and challenges.  Even the most creative people struggle to develop deliverable solutions outside their area of expertise.

So, in order to be an effective creative, we need to front end load knowledge.  How much knowledge?  Well, according to author Malcolm Gladwell, 10,000 hours.[2]  Gladwell provides a litany of examples, from across history, where the best, most creative out of the box thinkers have been in the unique position to have 10,000 hours of practice under their belts before delivering their “big idea”. Practice may not make perfect, but perfect is tough without practice.

Among academics who dispute this idea[3] (and there are many), most emphasise that practice alone does not deliver creative success.  And they are absolutely right.  I can guarantee that if I played cello for 10,000 hours I would be no Yo Yo Ma. But I think they also miss the bigger point, that both an outstanding level of skill and an incredible level of commitment and practice are usually needed to deliver true creativity.

Emphasising the process
Although the phrase “the creative process” is in common use, it is misleading.  Few people actually think of creativity as a process, and instead think of it as a spark, or a light bulb that appears suddenly.  From our earliest childhood, this is how creativity is visualised in books and cartoons.

However, when you talk to people who deliver creative ideas day in day out, most, if not all have a fairly rigorous process for delivering their best thinking.

Some of the most creative people in the world today are web and app developers.  Across business, from commerce to industry to the arts, they are delivering new thinking faster than the world has ever seen.  And yet a huge proportion of them do this going through a process which goes against everything we are led to believe about creativity: the sprint process.[4]

Sprint is designed down to the very last details – including the colour of your post it notes and what you can eat – to harness creativity.  The five day programme is highly structured and demands constant rigour and commitment to deliver.  And yet Google, frequently named one of the world’s most creative or innovative companies[5] (and indeed Google Ventures, its creative wing), swears by it.

Again, this plays to the idea that the dichotomy society has mentally adjusted to: creativity and flexibility, versus practice and rigour, simply doesn’t reflect the real world.

Creativity as innovation
Historically, (to vastly oversimplify) creatives have been seen as artists and innovators as technicians or scientists.  But in today’s complex, melded, disruptive world, we cannot let these definitions stand.

At its best, creativity is a form of innovation, which one study defined as having ideas for real problems[6]. When we seek creativity, we are frequently seeking innovation, or problem solving, the result of which may be more visual or artistic than other business solutions, but is nevertheless part of the same category.

This shows when we look at studies of the creative and innovative brain or type.  According to psychologists, key qualities of creatives are knowledge, intelligence, motivation and divergent thinking[7].  Innovators are known for similar cognizant skills[8].  The main difference is that often reports add skills related to the idea development phase, such as experimenting and networking to the innovator’s playbook, where creatives are still frequently regarded as idea initiators only – a softer skill.

This is wrong. Creativity is not a softer skill than innovation, it is the same skill, harnessed differently.

Reframing creativity
To put it bluntly, most people don’t think they are creative because they are applying far too narrow a definition of what creativity is.  They believe it is born, or innate, not made, through perseverance.  They believe it comes to you in a magic moment, not through tried and tested processes.  And they believe that this magic moment is all it is, and that it is not a creative’s role to experiment, redo, or take an idea to fruition.

At best, each of these thoughts is limiting.  At worst they disable the creative spirit in each of us.  They let us get away with thinking that if creative thoughts are not innate, if they don’t appear to us at unexpected moments, they – and by association we – don’t have real creative value.  For the sake of all of us, it is time to reframe creativity, so that next time we are asked, the 99.9% of us who are creative step proudly forward.