Reputation On Social Media - Comms Must Own It Or Lose It

The decline in influence of media and the rise of a networked, multichannel and personalised media has many implications: for society, for media, for politics, and for each of us personally. 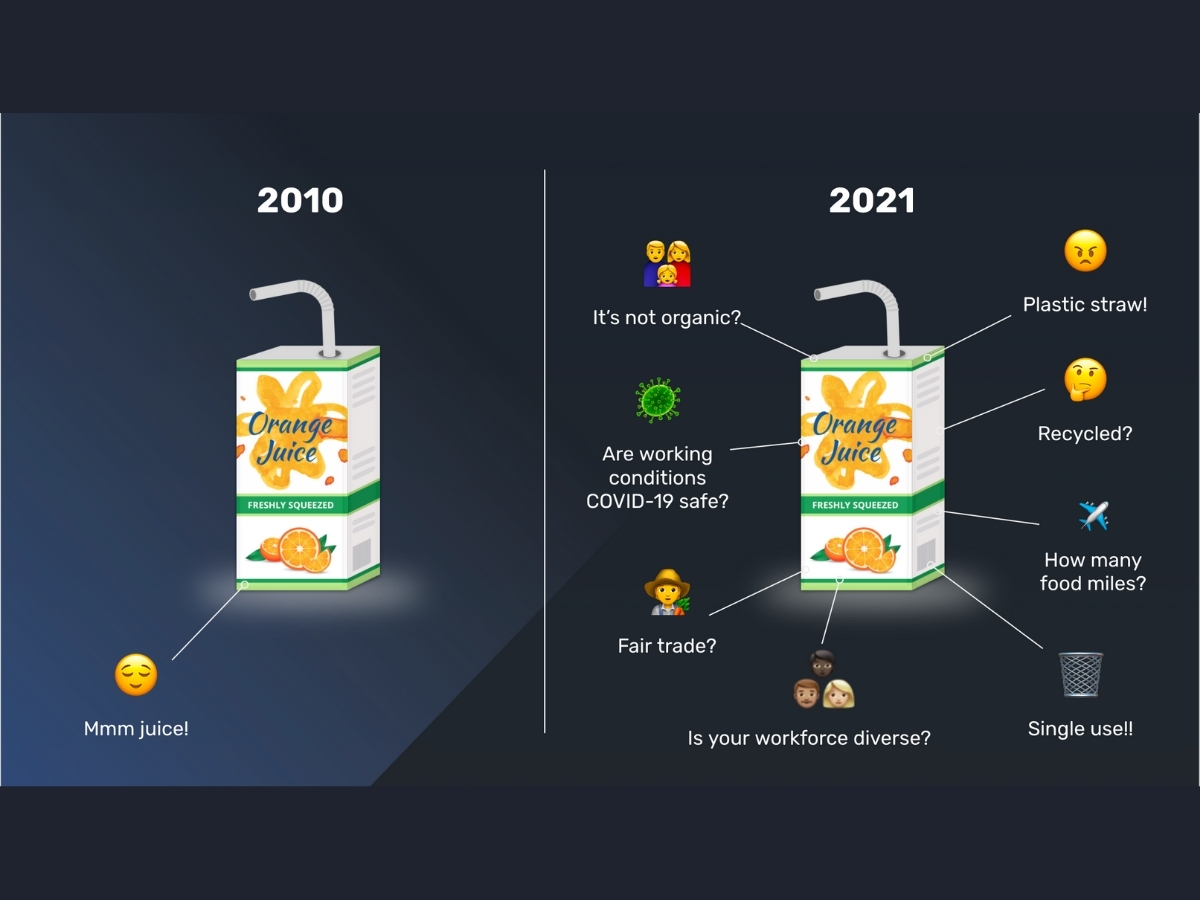 The “Clash and Turmoil”

Four decades ago, Walter Cronkite concluded his broadcasts of the CBS Nightly News with the words, “And that’s the way it was.” Few of his viewers found it extraordinary that the clash and turmoil of billions of human lives, dwelling in thousands of cities and organized into dozens of nations, could be captured in three or four mostly visual reports lasting a total of less than 30 minutes.

- Martin Gurri, The Revolt of the Public

That was then. Today that “clash and turmoil of billions of human lives” is fully captured by our media ecosystem, and delivered to us every minute, via high definition screens, social networks and personalisation algorithms, on our networked computers, phones and other devices.

Meanwhile, the influence of traditional media - as encapsulated by Mr. Cronkite - is under attack from various sources. The most recent Edelman Trust Barometer shows trust in media hitting an all time low - with 59% of people surveyed in 27 countries agreeing with the statement that “journalists and reporters are purposely trying to mislead people.”

The decline in influence of media and the rise of a networked, multichannel and personalised media has many implications: for society, for media, for politics, and for each of us personally.

I’d like to focus on a particular group who are impacted by this new reality: the professionals charged with protecting corporate reputation. Aggressively adapting to this future is going to be a requirement for these professionals to maintain their responsibility for reputation strategy -  and their professional relevance.

Who steals my purse steals trash; ’tis something, nothing; ’twas mine, ’tis his, and has been slave to thousands; But he that filches from me my good name robs me of that which not enriches him, And makes me poor indeed.

Companies, like people, need a minimum threshold of reputation to operate in society. If everyone believes a company is cooking their books, ruining the environment, abusing their staff, burning their suppliers, they’ll soon lose customers, staff, and, in regulated industries, their literal license to operate.

There’s rather a lot at stake: 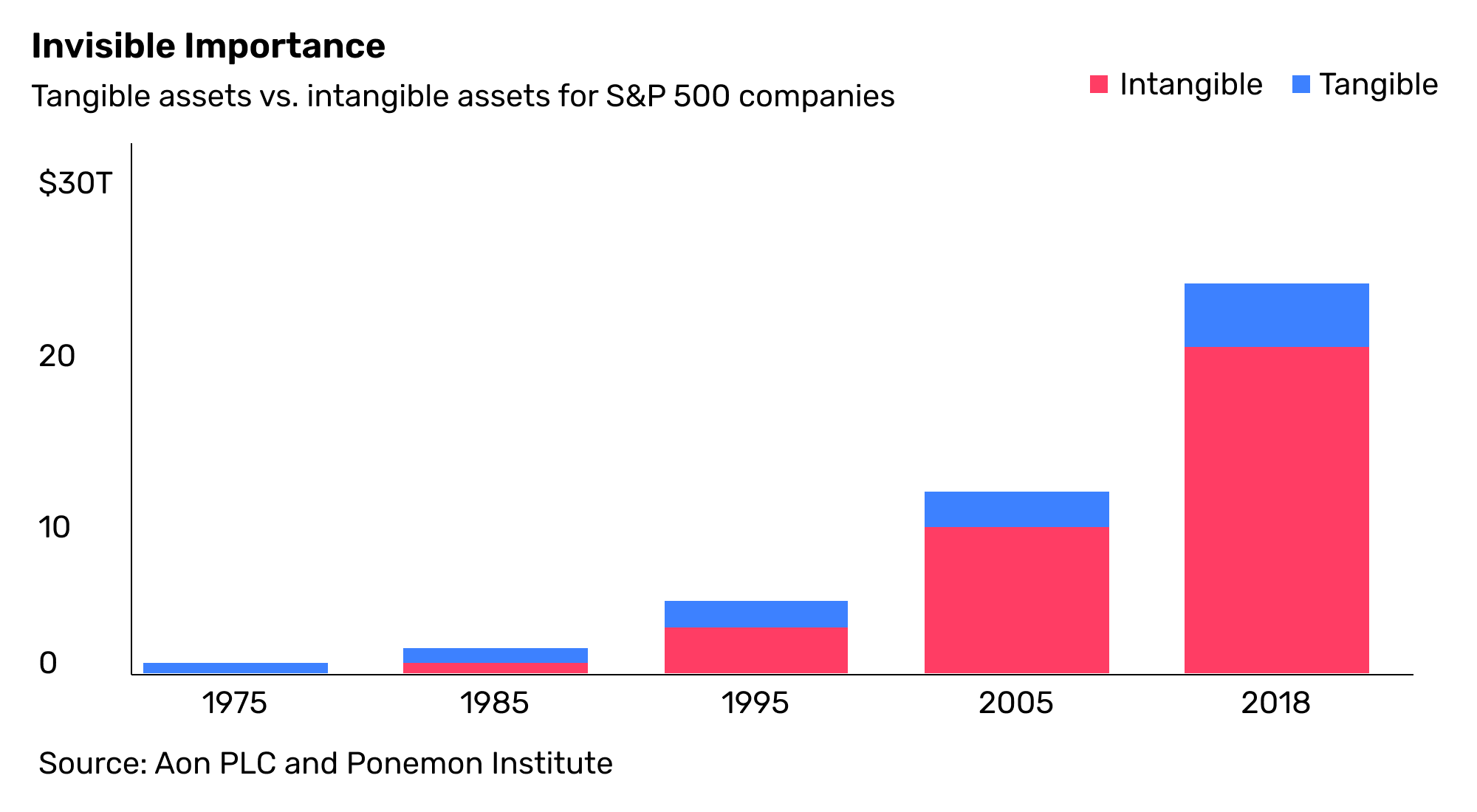 The new media ecosystem I referenced above means reputation can come under attack from almost anywhere - from angles and channels that didn’t exist even three years ago. So, how are communications professionals stepping up to the challenges of this new, wider media ecosystem? In recent years I’ve seen a sort of digital divide opening up among comms professionals, and while there’s plenty of grey zone, there are broadly two groups - or attitudes - at play.

There are many early adapters. These folks are fully tuned into the emerging interplay between media and social media. They track data and narratives across different networks, digital tribes and frontiers. They also use quantified data to inform their strategy and media planning, taking a “moneyball” approach.

Others are not adapting and don’t feel they need to. Their work is capital “M” media not social media - that’s for the marketing guys on the 11th floor. These are smart professionals, with excellent judgement and crisis context. But they’re going to have only a very limited role in future reputation crises unless they change this outlook.

Modern consumer reputation crises cannot be understood through the veneer of media reports, especially with such data on the true reach and impact of those reports provided by mostly estimated metrics.

To look at a recent example, the Robinhood - Gamestop crisis played out in the media - but also on Twitter, through millions of engagements on Facebook, and of course in communities on Reddit. Our platform showed how social media responses fed back into multiple waves of media reports, citing and amplifying influencer - and anonymous - voices, and even reporting a row between Ted Cruz and AOC that triggered another  social media storm. 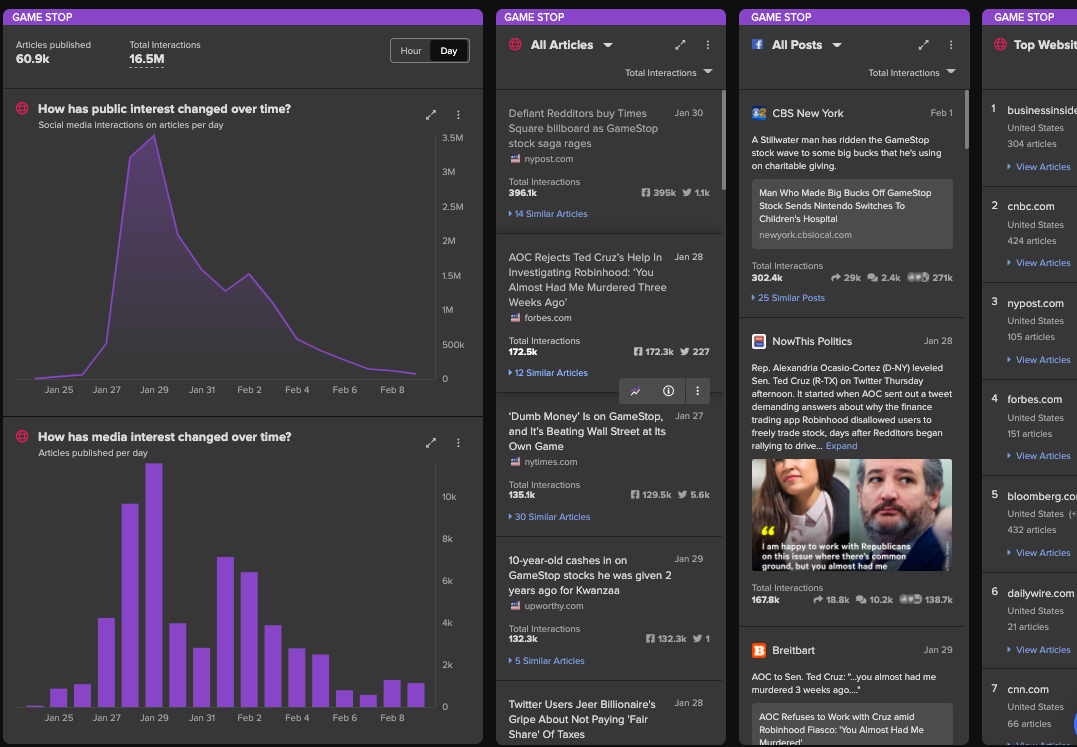 Put yourself in the shoes of the team charged with managing this crisis. To craft the right responses, send them to the right sources and influencers, and staff the right owned channels, that team would need to see what was happening on Reddit, how politicians were responding on Twitter, how the press was responding via articles, and how the public was responding to those articles on social media, to say nothing of the feedback loop created across these platforms. That’s quite a task, and requires PR leaders to have a framework for context and quantification to separate signal from noise.

To show how bizarre and multimedia the situation became, the most widely shared article about the entire Gamestop crisis - with over 400,00 engagements - was a NY Post report of members of a subreddit buying a Times Square billboard to post a message mocking both establishment Wall Street and those skeptical of the Fed’s money printing policy - via a 10 character meme. Imagine trying to explain that to a time traveller from 2010. 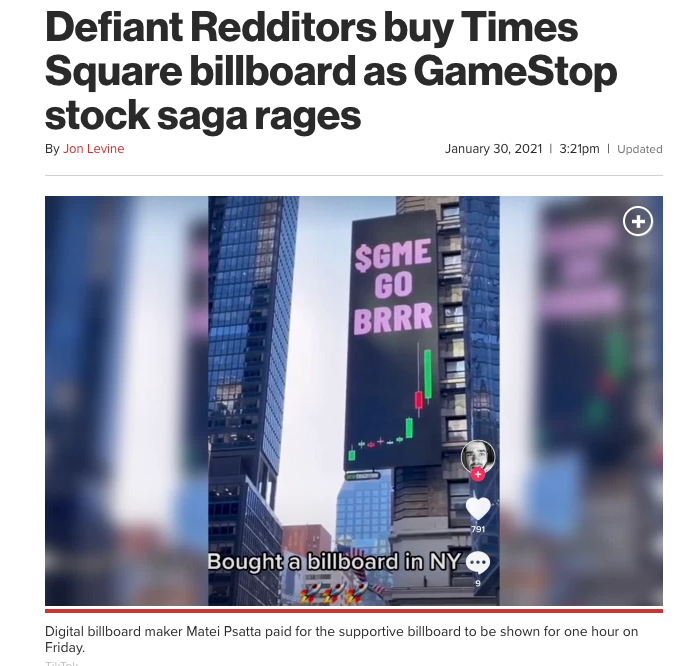 No More Heroes Any More

If communications professionals don’t step up and develop competency in the full social media sphere, others from social media specialists, to brand marketers, and even new agency-technology hybrids will begin to encroach on what has traditionally been communications’ territory. They’ll take on responsibility for reputation management in the world where traditional media plays alongside social posts and memes.

If PR only influences traditional media, but reputation plays out in a far wider public sphere, PR will become a lieutenant in a wider reputation management strategy - where someone else is calling the shots.

That should not be the case. At a recent PRovoke conference, Richard Edelman described why PR professionals should be poised to thrive and grow in relevance vis a vis their colleagues in marketing. Traditionally, marketers gave audiences simple stories, delivered through advertising. Ads where the brand hero drives off into the sunset.

Today, the advertisers don’t have that control. The brand hero can’t just drive into the sunset, followed by a curtain close. They drive into the volatile ecosystem of Reddit, Facebook, Twitter, TikTok: activists, critics, communities, fans, meme-makers, detractors, misinformation, and partisans, all with different goals and perspectives on that heteronormative hero.

The complexity of that new environment should be the great opportunity for communications professionals in the 2020s. After all, Richard said: “we excel at the complex.”

That is the case. But to seize the opportunity, communicators must embrace that complex world outside, and keep evolving their understanding of the places where reputation is actually happening. 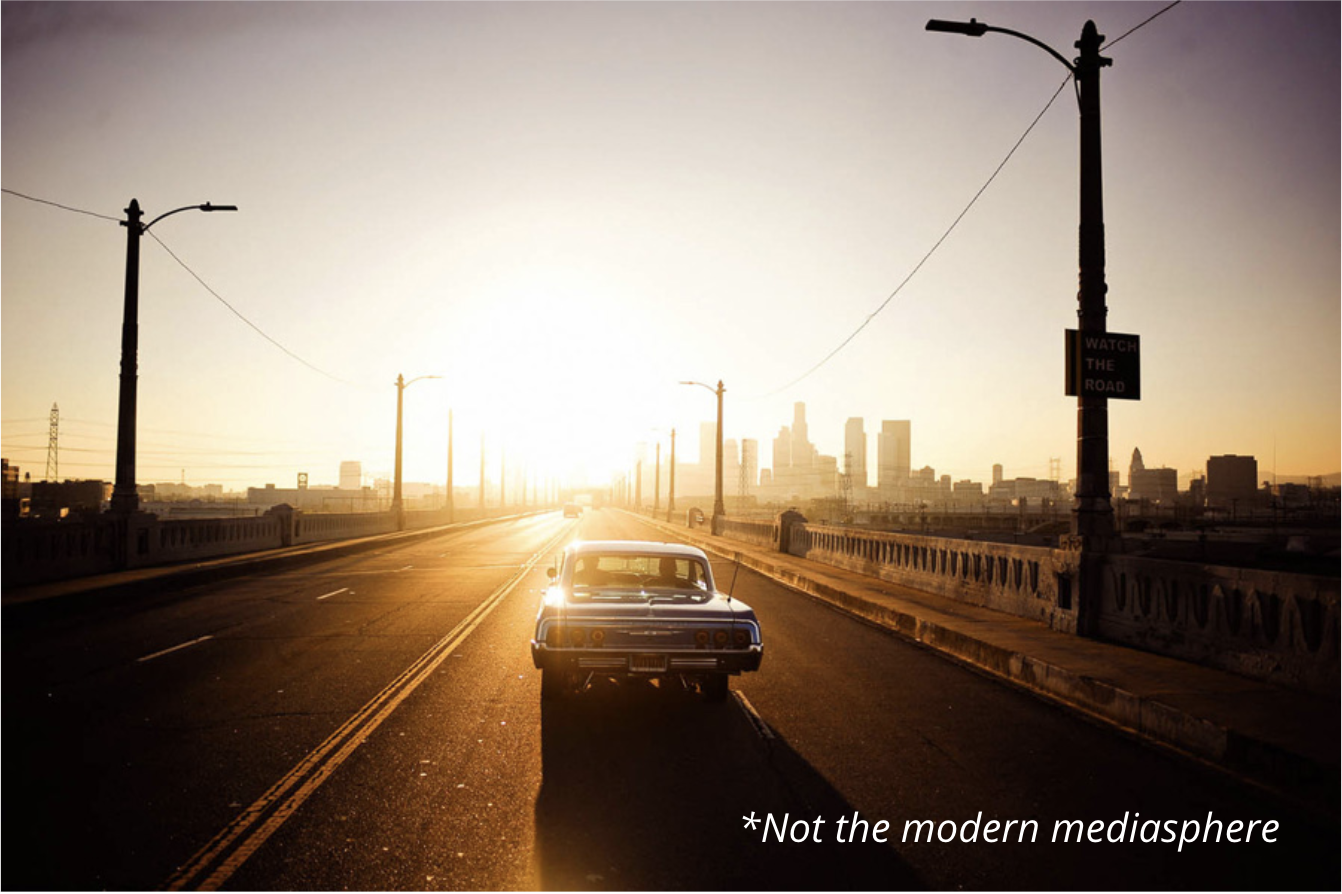 My case is simple: Communicators are well positioned to own a key resource in the 2020s: reputation. But to do it, they need to get onto the right side of the digital divide.

Through work with early adopters at various agencies and brands, we’ve picked up some perspectives that I hope will help those who are building the frameworks to do these things. In the coming weeks, I’ll share more, focusing on the plumbing of the new media space, misinformation about misinformation, psychological dynamics of social media, detracting tribes, superfans and the importance of building direct voice.
Article tags
NewsWhip Sponsored
News direct to your inbox