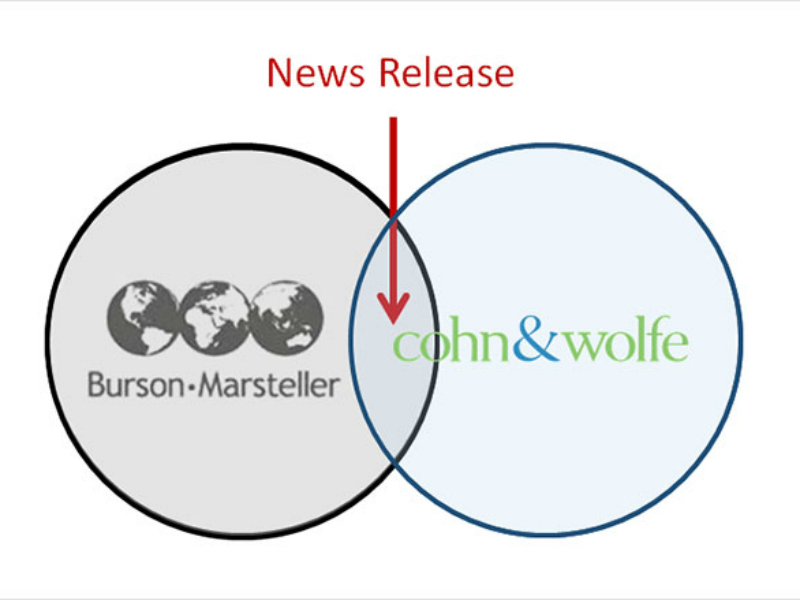 As part of an independent communications consultancy with a microscopic fraction of the revenue from Burson Cohn & Wolfe, it stands to reason that I don’t buy into the “bigger is better” position.

The two agencies pen literally thousands of news releases for their clients each year, many addressing M&A. How tough can it be to apply this expertise to their own announcement

Of course, what the news release states doesn’t necessarily align with reality.

As a public service, I’ve reverse-engineered the news release distributed over Business Wire chunk by chunk.


NEW YORK–(BUSINESS WIRE)–WPP (NYSE:WPP) today announced the merger of Burson-Marsteller and Cohn & Wolfe to create Burson Cohn & Wolfe (BCW), one of the world’s largest, full-service, global communications agencies with deep expertise in digital and integrated communications, across all industry sectors.

Commentary: The lead captures the thrust of the announcement. William Marsteller loses his real estate in the name. I suppose Burson-Marsteller Cohn & Wolfe doesn’t exactly roll off the tongue.

Burson Cohn & Wolfe combines Cohn & Wolfe’s expertise in digitally-driven, creative content and integrated communications – across the consumer, healthcare and technology sectors – with Burson-Marsteller’s strength in public affairs, corporate and crisis management, technology and research. Burson Cohn & Wolfe will be a network of more than 4,000 employees, across 42 countries.

Commentary: I’m sorry, but the synergy doesn’t ring true. Are they saying that BM isn’t digitally driven? This is about financial performance, gaining economies of scale to goose profitability. We’ll see heads roll next quarter.

“Our decision to merge the two agencies is driven by strong, compatible capabilities and expertise, a combined ability to deliver integrated solutions across multiple sectors and the scale to compete with the largest communications agencies in the world,” said WPP CEO, Sir Martin Sorrell.

Commentary: Finally a hint of what it is really about. The word “scale” sneaks into the Sorrell quote as in, “We can’t maintain our margins while competing against the other mega shops unless we reduce our operating costs.”

“We have a major opportunity and the right team to take this new agency to even higher levels of success. After years of strong leadership and delivering excellent results at Cohn & Wolfe, I know that Donna will ensure the success of the combined business. I would also like to thank Don for his contribution as CEO of Burson-Marsteller over the last six years. I know he will continue his dedication to serving clients and now be able to focus entirely on high-level counsel to those clients as Chairman.”

Imperato said: “The launch of Burson Cohn & Wolfe creates a new entity in the world of communications that offers our clients unparalleled, integrated digital solutions grounded in earned media. We are energized by the fresh offerings we will bring to both our clients and our employees.”

To secure seamless post-merger integration, Imperato has formed an executive group comprising select senior leaders from both agencies. The executive group will focus on the best ways to bring the agencies together ensuring continuity and excellence in client service.

Commentary: Remember News Release Writing 101 saying to avoid hyperbole, that adjectives like “breakthrough” and “revolutionary” bring out the cynicism in journalists. Imperato didn’t get the memo. Again, this marriage has nothing to do with clients. The new entity is going to deliver exactly what the old entities delivered to clients only with less overhead. As for that “executive group” who will oversee the merger, those are the guys/gals who will decide what heads roll.

As part of an independent communications consultancy with a microscopic fraction — now there’s a good use of an adjective — of the revenue from Burson Cohn & Wolfe, it stands to reason that I don’t buy into the “bigger is better” position.

If you took all the organizations in the world that buy communication services, I believe over 90 percent of the budgets are less than $30K per month. Even at the high watermark of $30K per month, that’s a four to five person account team.

I’ll take our five-person account team against a mega shop’s counterpart any time. With rare exception, the synergies touted by mega shops are fool’s gold, code for economies of scale.

Back to the big picture, the investor community favors bigness, the bigger the better. I call this the “Big Gulp effect.”

When Omnicom and Publicis were looking to join hands, the public statement highlighted the financial benefit that would come from economies of scale:

“The transaction is expected to create significant value for shareholders. The new company’s broader portfolio of agencies and services and deeper geographic footprint will allow the combined company to accelerate revenue growth and create operating synergies. The future scalability and internal synergies of the combined company are expected to generate efficiencies of $500 million.”

Would the transaction have helped current and prospective clients of the two companies if it had gone through? You would have been hard pressed to find even a single breadcrumb that would lead to a “yes.”

When the Holmes Report interviewed Donna Imperato, CEO of the newly formed Burson, Cohn and Wolfe, she shared:

"I want to be the best global agency in the world. This wasn’t done to find cost-efficiencies — that wasn’t even part of the discussion."

Not even part of the discussion?

Let me get this straight. Sir Martin Sorrell signs off on smushing together a $480M agency with a $224M agency and never raises economies of scale. It never occurs to him that stripping out the duplication in infrastructure will allow the $704M mega shop to increase profitability in a way that wasn’t possible when revenue was split between two agencies.

On the positive side, Imperato did stay on message.

It seems odd that the website for the new entity wasn’t ready to go when the news release went out the door.

Maybe they figured the services are the same, so they’re good to go and can deal with the branding downstream.


Lou Hoffman heads The Hoffman Agency, an integrated communications consultancy that specializes in the tech sector and other markets of complexity.  Beyond client campaigns, the firm offers a half-day workshop on its storytelling methodology.