Why We Need New Rules for Crisis Management

If crisis management were a game of sandlot football, the call would be, “play the same plays…a little differently."

The Digital Age has transformed the risks and response to reputation threats.
The result is a huge impact on the way that crises emerge, grow and are managed.
Renowned communications and crisis expert, recipient of one of the industry’s highest accolades, the PRSA Lifetime Achievement Award, Ron Culp lays out a very convincing case that a new set of rules for crisis management is way overdue. Ron is the editor and authored the Introductory chapter of the influential eBook, ‘The New Rules of Crisis Management – Issues & Crisis Planning and Response in the Digital Age’, published by the award-winning crisis management platform, In Case of Crisis.

The crucial change has been what Ron describes as the ‘dizzying speed’ of communication together with growing public skepticism of institutions of authority in all walks of life.
This need for speed is a huge reason why the ring-bound binder is finally dead as a way to store that crucial crisis plan – in the digital age you need digital tools, which means your crisis resources and team must be accessed and activated via a mobile app on your smartphone. (There’s a link at the end of this article for more information about RockDove’s In Case of Crisis app).

However, not everything is new in the new rules of crisis management. If crisis management were a game of sandlot football, the call would be, “play the same plays…a little differently,” says long-time leader and expert in the field, James Donnelly, an experienced crisis counselor at leading agencies. In the book, James identifies three significant consequences of the digital age which led to changes in how a traditional crisis playbook is executed.

#1: Today’s empowered and entitled public
The long-standing crisis playbook rule is to ‘address all stakeholders with empathetic and authentic communications’. However, today’s dynamics are that when a crisis strikes, people demand to know more about the situation directly from the organization. They expect authentic answers, two-way engagement and to know how the organization is going to put things right. And then they will share their views of the company and its response across their own digital networks.
That requires a shift in communications approaches:
● More sophisticated monitoring and evaluation tools
● Social media platforms become effective two-way communication channels (with the appropriate expertise and resources)

#2: Fleeting public attention
James observes that we are bombarded with more information and news (including the fake variety) than any generation ever. But the nature of that flood of data poses questions.
Are we really more informed as a public? Does the daily ticker of breaking news support critical thinking? Are journalistic gems getting lost in the detritus? Are we amusing ourselves to death?
The impact of this on a crisis are twofold, according to James. The first 48 hours of a crisis are more intense than ever before. On the other hand, the outrage and attention fades more quickly as the next big thing rolls into view commanding people’s attention.
As a result, the old crisis rules must be modified:
● The sound bite has become even more important
● Step-by-step approaches are needed to reach smaller, influential audiences with more detailed information (‘nesting doll communications’)

#3: Deep changes to traditional news
The time was that the mainstream media was the institution that would hold organizations up to scrutiny, report on crises and hold the perpetrators accountable for how they responded to the problem. However, the traditional media has undergone its own changes in the digital age, many of which have resulted in the erosion of its credibility.

James observes that some newsrooms today would rather risk being wrong than being scooped by a citizen with a smartphone and a Twitter account. He adds that we are seeing a rebirth in the media of thinly credentialed spokespeople including junk scientists, pseudo-experts and insta-pundits. They deliver entertaining sound bites, often designed to inflame the situation, without any meaningful insight or expertise on the topic. Added to all this is the new/old phenomena of fake news.

Bias, inaccurate reporting and political agendas have existed in media coverage forever. What’s new is the public’s apparent lack of concern about the facts in any news event over whether the interpretation supports their own pre-held beliefs and ideology.So, while many of the time-tested media relations rules still apply, there are new areas of focus for communicators:
● Validating ‘truth and facts’ has become more urgent
● Having allies has never been more critical
● Maintaining message consistency across all channels is crucial


Get more information about the award-winning crisis management platform, In Case of Crisis, and sign up for a demo & a free trial.


Mike Hatcliffe is a reputation and risk consultant for In Case of Crisis, an award-winning crisis app developed by RockDove Solutions, and used by over 750 global brands.
Article tags
Crisis Review Crisis RockDove Sponsored Content Sponsored 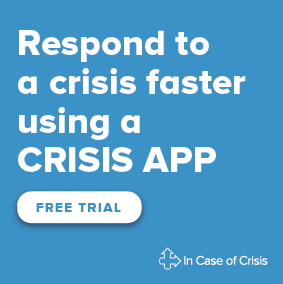