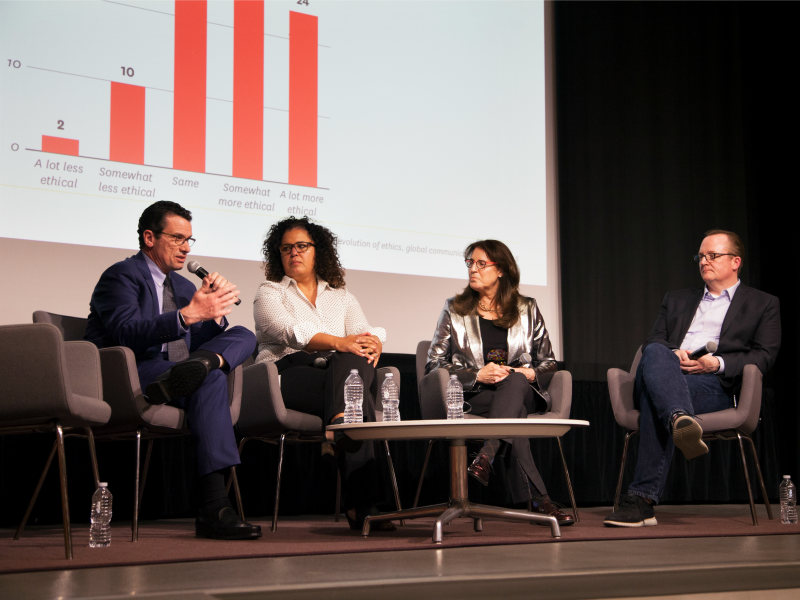 PR experts discussed whether corporations can be relied upon to act ethically — and PR's role in this — at the 28th Annual Kenneth Owler Smith Symposium on Public Relations.

LOS ANGELES — PR crises have become synonymous with poor corporate ethics, putting pressure on chief communications officers to take a more active role as an organization’s change and empathy agent. This was among the topics discussed yesterday at USC Annenberg’s annual overview of the public relations industry.

Over the next five years, 62% of PR professionals predict businesses in their countries will become more ethical — in part, because corporations are being increasingly relied upon to fill gaps left by the government entities.

Safiya Umoja Noble, assistant professor at USC Annenberg School of Communication and author of Algorithms of Oppression, challenged this optimism because emerging technologies, like artificial intelligence, mean that people no longer have the agency to make good ethical decisions.

“We always think of the CEO or company facing the crisis but the crisis is for the people who are most vulnerable and most exploited by the decision-making,” Noble said.

Looking through the issue from the corporate lens, Oscar Suris, head of corporate communications at Wells Fargo, said “success can be dangerous,” adding that before its 2016 crisis, Wells Fargo was among the most admired companies.

McDonald’s CCO — and former press secretary for President Obama — Robert Gibbs said as part of fostering trust, organizations should be more transparent around their business intentions, even when taking on purpose-driven initiatives.

“If you’re facing a trust deficit there’s no better time to be the conscience changer or empathy creator,” Gibbs said. He added, the CCO or PR team shouldn’t be positioned as the conscience in opposition to the rest of organization.

WE Communications CEO Melissa Waggener Zorkin said there’s a rush towards being an activist CEO, yet that’s often not the right course of action. She advised CEOs to consider the issues most important to their employees and build sustainable plans around supporting those.

Paul Holmes, who moderated the panel, distilled the four qualities that define a good PR practitioner as: curiosity, empathy, integrity and courage.

The discussion was part of the 28th Annual Kenneth Owler Smith Symposium on Public Relations and also featured a keynote by Richard Edelman on the evolution of ethics.