Please refer to our Privacy Policy for important information on the use of cookies. By continuing to use this website, you agree to this.
Home Latest 'We Are All Shaping The World' — IDEO CEO On The Power Of Design Thinking 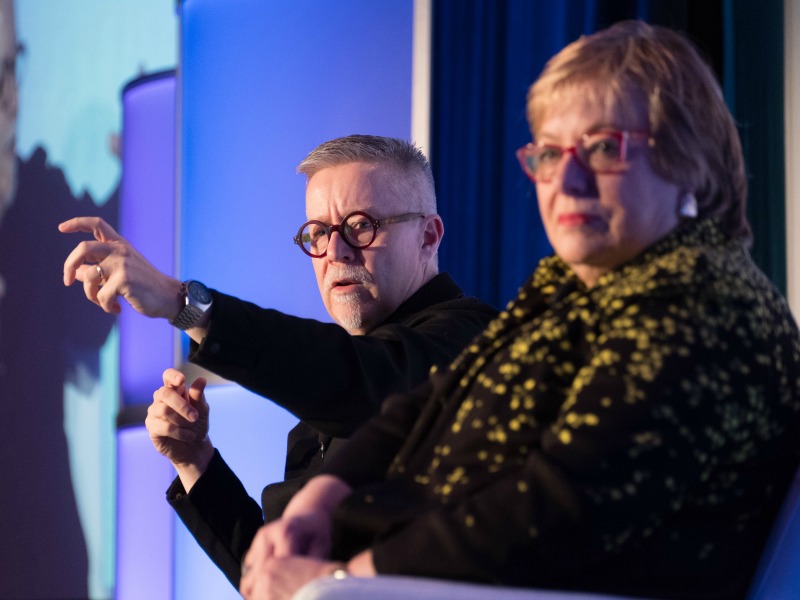 NEW YORK — At a time of widespread disruption, IDEO CEO Tim Brown is encouraging communicators to adopt design thinking — via a three-pronged approach to problem solving — as a means of transforming their organizations.

“We are all designers. We are all shaping the world at some point … with some sort of intention,” said Brown, who is president as well as CEO of the global design firm. “These mindsets and methods are all about how we organize (around) what at some level is an infinite set of possibilities.”

Brown's comments Thursday were part of a discussion on the subject at the Page Society's annual spring seminar. The conversation was moderated by APCO Worldwide founder and executive chairman Margery Kraus.

Brown said that in offering an approach that is at once creative and scientific, design thinking could boost communications initiatives by providing a framework for change.

The three steps involved in the approach are clear cut — identify, clarify and come up with possible solutions to problems. “The process starts with solving the problems … going into the world to know what we’re dealing with, using insights to figure out how to clarify the problem and explore options for what we think the answers are going to be,” he said.

Brown also touted design thinking as a proactive means of navigating business challenges.  Not only does the methodology lead to action, but he suggested that design thinking can help to identify issues and problems before they hatch. “You’re looking to seek out questions and answer them,” he said.

Case in point: Given how drastically the role of chief technology officers has evolved over the last decade, communicators handling internal relations “shouldn’t be surprised if that’s happening in other roles,” he said. In turn, a design thinker would already be coming up with ways to handle that kind of disruption when the fallout hits.

For communicators, adopting new tactics is also critical in today’s new business climate, which calls on companies not only to produce viable products or offer services, but also to build corporate cultures and rally people around purpose.

“At a moment in time when we are constantly being surprised by what we thought was not feasible is feasible … I would encourage you not to limit your thinking about what you think is (attainable). There is plenty of time for that later,” Brown said. He encouraged seminar attendees to “give yourself permission” to start from a place of unlimited options in conceiving means to achieve goals.