Please refer to our Privacy Policy for important information on the use of cookies. By continuing to use this website, you agree to this.
Home Latest 12 Million & Counting: How Can Comms – and Communicators – Support The Refugee Crisis? 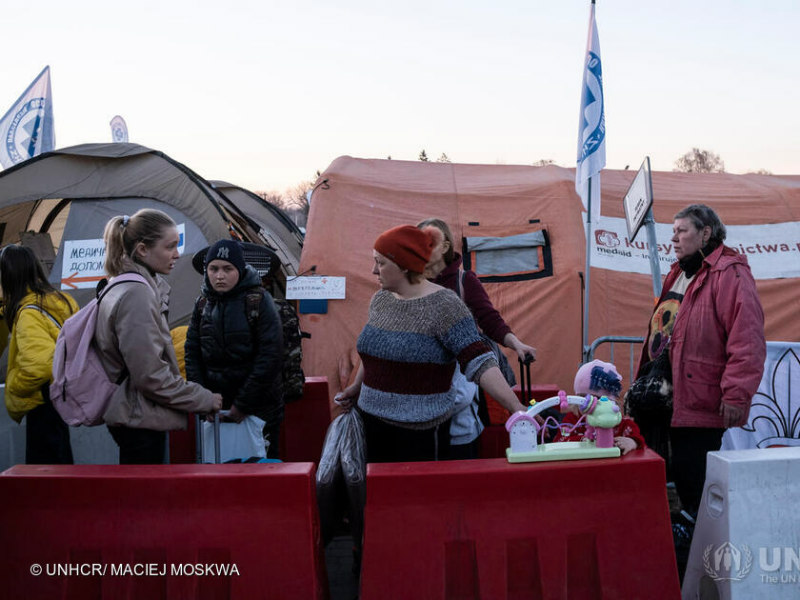 12 Million & Counting: How Can Comms – and Communicators – Support The Refugee Crisis?

It’s only a matter of time before we start hearing negative stories about Ukrainian refugees, so we have to keep the story relevant and stop it becoming yesterday’s news.

RC: UNHCR research has shown that the Ukraine war has pushed the total number of forcibly displaced people globally beyond 100 million for the first time. How do the human impacts of this invasion compare with others you have dealt with?

JG-W: I've been doing this work since 1994 and I’ve seen my share of these crises. It's hard to draw that comparison, because the scale of what's happened in Ukraine is similar to others. However, it's the speed at which it's happened that is so shocking.

I remember the day we reached 12 million people forcibly displaced from the war in Ukraine was the same day that we were holding our Syria pledging conference, for the eleventh year in a row. That total is the same number as those forcibly displaced from Syria, but the difference is that the displacement in Syria took years, whereas in Ukraine, it has taken around five weeks.

Another facet of the Ukrainian experience is the sheer number of refugees who really were caught off guard. They knew that the situation was deteriorating and that there was the possibility of war, but were still blind-sided by what happened.

I did a tour through the bordering countries very early on and I met countless people who had literally 15 minutes to decide what to do. I met one woman who said the morning before she was sitting in an outdoor café in Kyiv. I’m not sure if it was denial or that people truly didn’t think it was going to happen, but what finally triggered her was the building directly across the street from her being hit and going down in front of her eyes.

It's something that you hear in a lot of refugee crises – there’s a sense of anxiety, but then your life changes forever in a split second. It’s the scale and speed of what we have seen and heard from Ukraine that is particularly dramatic. We have certainly seen the devastation of urban areas in Kosovo, Bosnia, Afghanistan and Syria, with concentrated pockets destroyed, but with Ukraine it’s sustained, all-out war.

RC: To what extent - and in what ways - is effective communication a cornerstone of your efforts to support refugees, asylum-seekers, IDPs and stateless persons?

JG-W: Communications is probably one of the greatest challenges for any humanitarian agency and, for UNHCR, in particular. This is particularly the case for Ukraine because we've seen such a huge number of displaced people with so few opportunities either to return home or to find other durable solutions.

This must also be seen in the context of the very negative trend in attitudes towards refugees and asylum-seekers since 2015 and the European refugee crisis – even though that involved “only” a million refugees at the time. Governments and populations were saying that they couldn’t manage that influx, but we’ve now seen that if it’s managed – and the political will is there – it can be done. That means communications around the right to safety, asylum or international protection really comes into play, as it has done with the war in Ukraine.

Communication has also played a key role in tapping into the relatability of what was happening. So many people could really imagine that it was them – like the woman hanging out in a café the day before – and that really struck a chord with so many.

Another key facet is the evolution of the media. At the start of my career, the Bosnian war happened in the very early days of CNN, with newspapers and radio being the main means of showcasing the refugee and humanitarian situation. With Ukraine, it is now massively digital and social, with policy decisions being made on Twitter and refugees themselves self-reporting what is happening. For UNHCR, communications is critical because everything is playing out in real time on people's phones, laptops and TVs.

RC: Much has been written about different groups of displaced people being treated differently due to their ethnicity. Do you think the west has been ‘racist’ in its treatment of refugees?

JG-W: I think we've definitely seen differing standards of protection and reception of refugees, with Ukrainian refugees being welcomed, for example, into Poland on literally the same day as people of other ethnicities were turned back from Belarus. Ukrainian refugees are being allowed into certain countries, while other nationalities are still not and are experiencing almost deterrent policies.

For UNHCR, it’s wonderful that Ukrainian refugees are being accepted and protected, but others should clearly be welcomed as well – as should be the case for refugees from countries like Myanmar, Ethiopia and Syria. So it is not, and can not be, an either or – all should be welcomed.

RC: What have been the greatest communications challenges you have faced relating to the war in Ukraine and how have you sought to deal with those challenges strategically and tactically?

JG-W: In every emergency, as quickly as people start to pay attention to refugee stories because of the immediacy of UGC, digital, social and news media, we see a natural drop-off of interest, as fatigue sets in and people tune out.

That’s when the hard work starts, as people look to return home and we work to make that viable, while also supporting those staying on in neighbouring countries or further afield. This is particularly important for children, ensuring that they are fully integrated and able to go to school – while also dealing with the trauma.

One of the tactics that we try to use the most is just humanising the story. When you’re faced with a huge wall of millions of displaced people, they inevitably become nameless and faceless, so people flip to another channel. We have to share the stories of their individual circumstances and challenges – be it an elderly Ukrainian or a child who fled with their mother, who has now gone back to fight alongside her husband.

There's a debate about how effective it is, but I also still believe strongly in hope-based communication and, often highly visual, stories of extraordinary people in impossible circumstances, who provide glimmers of hope.

RC: How have you gone about tackling the related challenges of misinformation and disinformation, highlighted by organisations such as the ICRC as a major issue?

JG-W: This is a huge issue for us and something we saw with the hysteria of people saying refugees from Myanmar and Ethiopia were bringing COVID with them as a justification to keep asylum-seekers out. With Ukraine, there's a lot of money and political attention going into different misinformation and disinformation campaigns.

We’ve had relationships for well over a decade with many of the main digital and social platforms. So we’ve been working closely with Facebook, Twitter, Tik Tok, ICRC and others to provide tools and resources, and to help people avoid spreading misinformation unknowingly from bots or propaganda machines. That includes setting up helplines in different languages to verify information to give advice.

RC: You have a very active Ukraine-specific online newsroom and other digital resources. What role have digital and social played in your overall strategic communications strategy?

JG-W: It's all a work in progress and we're still figuring out the best ways to get information out there. The key is to be clear on how we want them to engage and what we want people to do with the information – be it calling their legislators, donating or becoming volunteers.

We’re gathering data all the time on who is getting their news from Facebook, the BBC or Fox News, so we’re getting much better at targeting based on the data gathered. We don't have the resources that many organisations in the private sector possess, but we're learning and improving every day.

RC: How can professional communicators keen to show their support for the people of Ukraine get involved in – or support – the work of the UNHCR and other IGOs/NGOs?

JG-W: A lot of what can be done is in the digital and social space – not just sharing, but also adapting our resources to specific audiences and networks. With Ukraine, we’ve seen the power of solidarity and communication, a real sense of common messaging and different parts of society really engaged with their communities. There’s been a huge outpouring of unsolicited support and partnership, with the private sector engaging with their own networks, audiences and clients in their own way.

What matters, above all else, is keeping the drumbeat going, as support and interest wane. It’s only a matter of time before we start hearing negative stories about Ukrainian refugees, so we have to keep the story relevant and stop it becoming yesterday’s news. All professional communicators have both personal and professional networks, and there is so much that can be done in terms of outreach.

A final plea from me and from UNHCR is to use this new solidarity, empathy and understanding of how hard it is to flee war, and to extend it to other refugees. The Ukraine war is decimating food security around the world and with 30% of the world's grain exported from Ukraine, the implications for refugees in Myanmar, Somalia and Yemen are devastating. Please make those connections from Ukraine to other conflicts and to other displaced communities.