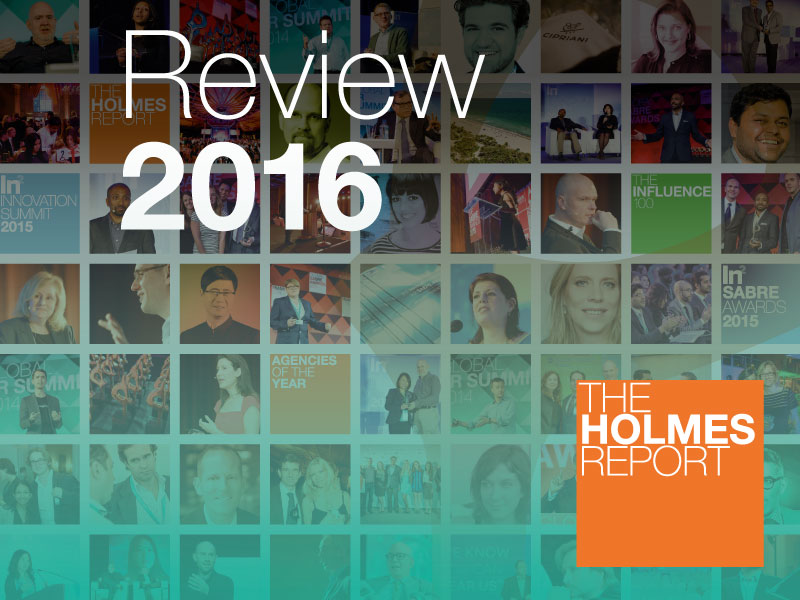 This year's most popular news stories featured big account moves and executive appointments from across the globe, along with thought leadership on workplace benefits and Cannes.

We continue our 2016 Review with our 10 most-read news stories of the year. As ever, we've excluded awards and ranking stories as they skew results. Unlike previous years, this year's list is a broad group, featuring big account moves and executive appointments from across the globe. Also worth noting is a the presence of a workplace benefits story at the top of the list, and a provocative Cannes piece at the end.

1. Golin Rolls Out Unlimited Vacation, Extends Paid Parental Leave
Forget about the big account reviews and CEO shifts, what people really care about most — unsurprisingly, perhaps — are their workplace benefits. In this case, it was Golin's laudable decision to implement an unlimited holiday policy, along with extended parental leave and expanded flexitime, that attracted the most eyeballs. And this story's popularity proves that Golin's move, along with similar efforts at H+K Strategies and Finn Partners, is being monitored very closely by the industry.

2.  Chipotle Splits With Edelman And Seeks New PR Support
Not that account reviews weren't popular, heaven forbid. And this one, featuring a fast food chain grappling with a debilitating food safety scare, proved more interesting than most. Edelman (in conjunction with Zeno) had won Taco Bell a few months earlier, so Chipotle's decision to seek a new agency was not a major shock. But the juxtaposition with its crippling crisis proved to be an irresistible combination for many readers, with Burson-Marsteller ultimately winning a keenly-contested pitch.

3. P&G Consolidates Global PR Support With 5 Agencies
In terms of budget alone, this one was indisputably the biggest account review of the year, even if it mostly took place in 2015, before decisions were made in January of this year. At its heart was the consistent effort by P&G to simplify operations and slash agency costs, in this case by targeting the FMCG giant's myriad web of PR agency relationships across the world. Accordingly, P&G opted to consolidate with five global agencies although, 12 months later, it is worth asking exactly how much has changed — with the company still retaining specific local PR support in many markets.

4. Shift Sells To Canadian Firm National PR
The pace of agency acquisition showed few signs of slowing in 2017, illustrated by this deal in May — the sale of $20m firm Shift Communications to Canada's National PR. Not only was Shift one of the biggest firms to sell this year, but it neatly reflected the premium that digital-focused agencies attract in the market. Expect more on this in 2017.

6. Lucy Allen Jumps To Edelman After 20 Years At Lewis PR
Our most-read executive move of the year came when Lucy Allen left for Edelman after 20 years spent building Lewis. Indeed, Allen was one of a triumvirate of long-term employees to leave Lewis within a short period, alongside US head Morgan McLintic and global client lead Andy Oliver. The moves effectively constituted a renewal of the independent firm's senior leadership ranks, amid a time of considerable growth and change across Lewis.

7. Alan VanderMolen Joins WE Communications To Oversee Global Expansion
Who knew Alan VanderMolen was this popular? In 2015, he posted twice in our top 10, thanks to his presence at the heart of Edelman's issues in China. This year, thankfully, he made the headlines for all the right reasons, joining WE Communications in a newly-created role to help kickstart global expansion at an agency where growth had stagnated in recent years. In many respects, it is a role with a low margin for error, so — boom or bust — might we be seeing VanderMolen grace this list again next year?

8. Jessica Lee Exits McDonald's To Lead Communications At Netflix Asia
Another major personnel move, this time on the client side, as Netflix further demonstrated its Asian intentions by hiring its first communications head in the region. Jessica Lee departed McDonald's after seven years with the fastfood giant, and has already shaken things up at Netflix by overhauling its Southeast Asia PR support.

9. Omnicom Puts Karen van Bergen In Charge Of PR Agencies
Probably the most significant appointment, though was Omnicom's decision to consolidate leadership of its 10 PR firms in a new PR group led by CEO Karen van Bergen. Hence this analysis, which explored the challenges the former Porter Novelli CEO will face in her new position. It is still early days for van Bergen, but the signs since she took charge are encouraging, with Omnicom's PR division again active on the acquisition front and more aggressively seeking collaborative solutions and growth.

10. PR Grand Prix: 'This Is Work We Should Repudiate, Not Celebrate'
Not exactly a news story — more of a manifesto for the sanctity of real public relations work in the post-truth era. Paul Holmes takes aim at the winner of this year's Cannes Lions PR Grand Prix, arguing that the “Organic Effect,” — a viral video campaign created by Swedish advertising agency Forsman & Bodenfors — was "at best misleading and at worst completely dishonest." And, judging from the outpouring of feedback we received, many of you agreed.