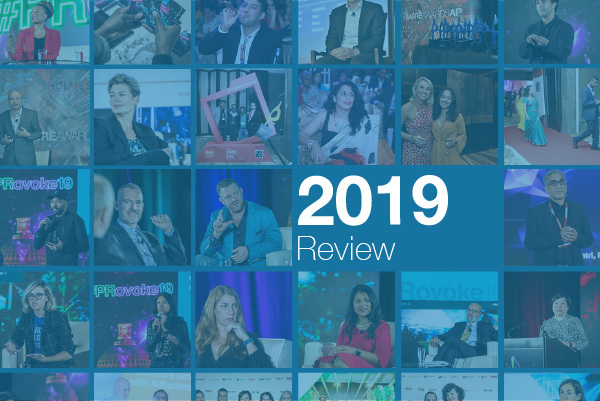 We continue our 2019 Review with our 10 most-read news stories of the year. As ever, we've excluded awards and ranking stories as they skew results. So what grabbed your attention this year? Well, one particular city reigns supreme — to little surprise — along with senior in-house moves, the Bayer/Monsanto consolidation, and news from the industry's two biggest PR firms.

1. Revealed: Failed Hong Kong Govt PR Plan To Salvage Global Reputation
Our biggest news story of the year — and indeed the decade — was our scoop that eight global PR firms had turned down the beleaguered Hong Kong's government PR assignment. In news terms, this one had it all — Hong Kong's government attempts to rebuild its global reputation amid its disastrous handling of the city's epochal protest struggle, but cannot find a single taker for the brief. Unsurprisingly, the story cut through the usual industry firewall to become a worldwide media staple across the BBC, Guardian and many more. And in doing so, it underlined the importance of genuine public relations, rather than the spin-inspired version HK's government appeared to be seeking.

2. Target CMO: 'It Didn’t Take A Miracle. It Took Getting Back To Basics'
Event sessions rarely trouble the upper reaches of this list, but Target CMO Rick Gomez's unflinching account of how the company emerged from its biggest sales slump was hugely popular with our readers. “Change is not always comfortable. But in today’s environment, the best work is often not comfortable,” said Gomez — which must count as indispensable advice for marketers everywhere.

3. Monsanto Corporate Issues Lead Chris Samuel Departs After Bayer Acquisition
The first of a series of senior in-house moves that grabbed your attention this year, Chris Samuel departed Monsanto after 12 years with the company in senior global corporate affairs' roles. Samuel's decision to leave came one year after Monsanto was acquired by Bayer, and came amid the Bayer/Monsanto stakeholder mapping story referenced below, helping to explain this story's popularity, no doubt. Samuel was not the last senior Monsanto communications exec to depart this year either.

4. CMO Shannon Stubo Brayton Steps Down After Nine Years With LinkedIn
One of the few PR leaders to expand their duties to encompass marketing, Shannon Stubo Brayton became a key figure in LinkedIn's rise into a powerhouse social network. So her decision to leave after nine years with the company was big news. Stubo Brayton is likely to do very well in her new advisory career, building on her considerable marketing communications and enterprise experience in Silicon Valley.

6. Zeno Declines to Repitch Salesforce Business
One of the biggest account reviews of the year carried with it the news that Zeno would not be defending its role on an anchor assignment that it won in 2017. The Salesforce review came after AT&T's Brad Burns joined Salesforce, replacing Corey DuBrowa as CCO.

7. Consulting Giants PwC and KPMG Create New Global Comms Roles
After so much attention was paid to the in-house moves already mentioned on this list, this story perhaps served as a logical conclusion — bringing together that particular trend with the broader emergence of management consultancies in the communications arena. Either that, or people have suddenly become really interested in PwC and KPMG.

8. Bayer Suspends Agency Relationships Pending Monsanto Investigation
From the story that also gave us this year's most popular longreads, Bayer's suspension of FleishmanHillard made for irresistible reading. A high-profile media scandal, complex public affairs issues and a major client at loggerheads with its primary PR agency. All of which, unsurprisingly, added up to one of the stories of the year.

9. Weber Shandwick Loses Three B2B Technology Leaders
There was plenty of change at Weber Shandwick this year, including a new CEO in the shape of Gail Heimann, but our most popular story from the firm concerned the departure of three longtime B2B tech leaders from its London office. After a combined 32 years with Weber Shandwick, Joe Walton, David Woodward and Charlie Meredith-Hardy departed to start their own specialist agency; one imagines it will do well when it launches in January.

10. Edelman Revenue Declines 1.1% In 2018 To $888m
After dominating this list in previous years, it comes as a surprise to find that only one Edelman story rounds out this year's ranking. Even accounting for its slowing growth in recent years, news of Edelman's first revenue decline in a decade came as something of a bombshell, after a period in which turbo-charged growth helped propel the business into the world's biggest PR firm. The story was followed up later in the year by an in-depth analysis that examined the 'perfect storm' facing Edelman as it attempts to transform its fortunes.