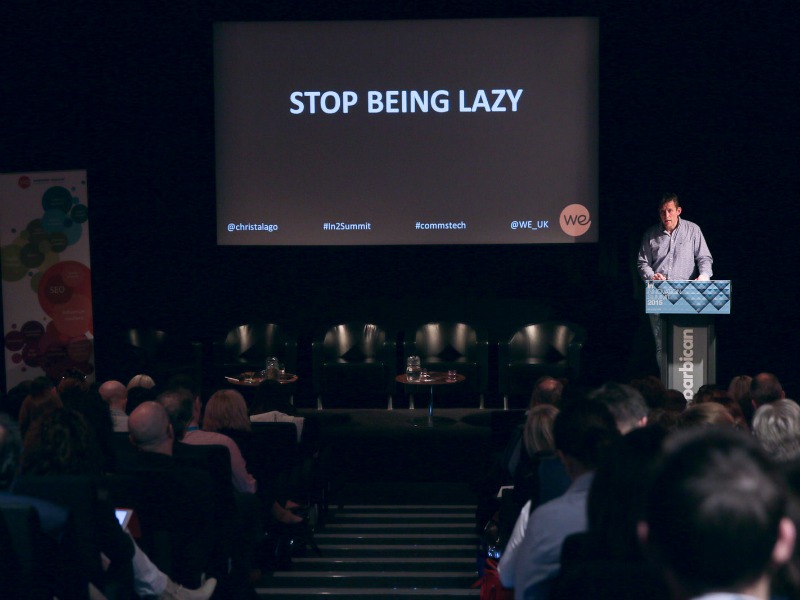 6 Things We Learned At The 2015 London In2Summit

After successfully launching in 2014, our In2 Innovation series has become a very nice addition to the public relations calendar, helping to explore the trends and possibilities that are reshaping the engagement discipline.

The 2015 EMEA edition, which took place earlier this week at London's Barbican Centre, was no different, with more than 200 attendees from across EMEA packing the room to hear from the likes of SB.TV's Jamal Edwards, Unilever's Heather Mitchell, Nissan's David Parkinson, Telefonica's Nicola Green and Twitter's Will Scougal.

As ever, there was a lot of information to process, from YouTube trends to millennial anxiety to virtual reality to next-generation talent. To make it easier, here are six key takeaways that should be on the radar of every progressive PR person. (Also, you can find all the photos here).

1. Avoiding technology is no longer an option

In a persuasive lightning talk, Waggener Edstrom's Chris Talago argued that the communications world has to do a better job at integrating technology into all of its processes. And he is not wrong, pointing to four areas where technology is bringing specific benefits — audience discovery; creative; distribution; and, impact.

"If you have any hope of being considered a smart agency, you’ve got to stop thinking that phoning a few journos and sticking their comments on a PowerPoint is classified as insight," warned Talago, adding that advertising and marketing firms are ahead of the PR world in this regard.  "We need to speed up our evolution if we’re to take advantage of our position and continue to see revenues move across to us — this is a once in a generation opportunity."

2. Who has the skills to pay the bills?

Of course, greater adoption of technology requires a different range of skills within the PR world. Talago noted that "the organisational structure of agencies and in-house teams is about to go through a fundamental shift," — a topic that was expanded on during a typically popular session on talent. The PR industry still has its work cut out when it comes to attracting next-generation talent, possessing the kinds of specialist skills that are also prized by advertising and digital agencies and, as Hanson Search founder Alice Weightman noted, are being "hoovered up" by the likes of Apple, Google and Amazon.

Not that specialists are the only ones in demand — with Telefonica's Nicola Green adding that a mix of skills still appeals. Even so, TBWA's Amelia Torode pointed out that PR people are, too often, "brilliant generalists." "Where's your centre of gravity?"

Much of the talent debate centered on millennials, a topic that remans a source of concern from both a personnel and marketing perspective. Luckily, though, delegates heard a much newer spin on the issue from Zeno's Therese Caruso, who broke down why 'Generation WE' — all 1.9bn of them — is redefining traditional expectations of brands. These are people that are, as Caruso said, "more interested in developing their own personal brand than declaring loyalty to yours."

Accordingly, that calls for marketers to consider how their brand is helping to build Gen WE's personal brands, involving a more enlightened take on co-creation, advocacy and sounding boards. "Acknowledge them as an influencer: involve them, give them a job to do, let them be your advocate," said Caruso. "Know what they’re interested in, what their issues are, what they’re learning about."

4. “Chase your dreams, not the competition”

One particularly famous member of 'Generation WE' was keenly-anticipated — SB.TV founder Jamal Edwards — and he did not disappoint, explaining how his successes had come through “looking for problems and the finding solutions.” “Innovation is trying to find a gap in the market,” added the 24-year-old Edwards, whose YouTube channel is one of the UK's most popular. He advised communications professionals to "chase dreams, rather than the competition," and noted that innovation also comes from doing things better, if not first.

Edwards also offered a interesting take on brand involvement in his channels, noting that the best "branded content is where the audience doesn't realise it's paid-for content." And as Unilever's Heather Mitchell noted on the same panel — “the key is authenticity. People like Jamal have to want to work with our brands."

5. Storytelling requires a leap of faith

While there was some debate about whether brand storytelling should be such a popular proposition (Prime's Tom Beckman noted that communicators need to focus more on their actions), there was little quibbling with the notion that content offers a route to the kind of authenticity that all brands crave. In this regard, Intel's Stuart Dommett — in conversation with H+K's Vikki Chowney — offered a compelling overview of his company's successful content strategy, but noted that the initiative had required something of a leap of faith.

"I think of myself as a publisher," said Dommett, but admitted that investment had to precede results. This kind of shift in attitude is not always an easy one for companies to make and Dommette explained that, at Intel, storytelling is still a "skunkworks" that is "under the radar." "Sometimes it takes somebody to do something different and prove something," he said. "Storytelling is the right thing to do. Now, we have to measure. We have to show how this is going to work."

It was difficult to mistake the passion that Hotwire's John Brown demonstrated for new virtual reality technologies, pointing to their ability to genuinely reshape the marketing and communications world. Building on the idea that “try before you buy” was an exciting virtual reality application for retailers, Brown suggested potential for the new technology in public education and the not-for-profit sector—using VR to allow donors to visit a disaster site and witness the devastation—or in the public affairs arena (allowing people to see the new skyline before planning permission for a new skyscraper) as well as in brand experience.

For that to happen, though, requires social media to be fully integrated into marketing and comms. Surprisingly, this is still a challenge, not least because of the PR world's continued aversion to paid media. Nissan's David Parkinson went as far as to say that "social media is dying", not because social channels are going away or  because of lack of interest, but because “it should be part of everything.”