Please refer to our Privacy Policy for important information on the use of cookies. By continuing to use this website, you agree to this.
Home Latest Aspen: Bank Of America Finds The Win-Win In Advocacy Group Engagement 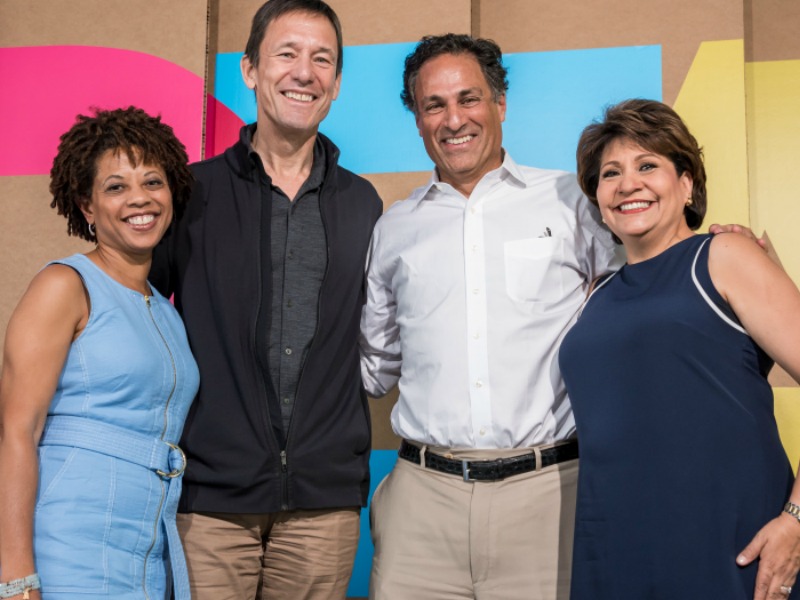 Bank of America and the advocacy groups on its National Community Advisory Council have found mutual benefit in mutual trust.

ASPEN, CO—Corporations and stakeholder advocates may not always achieve consensus, but greater engagement can lead to better outcomes for all parties, Bank of America environmental, social and governance executive Andrew Plepler told an audience at the Aspen Ideas Festival this morning, discussing his company’s National Community Advisory Council on a session exploring “Constructive Tension: Advocates and Corporations on the Global Stage.”

In a panel discussion led by Melody Barnes, co-founder and principal, MB2 Solutions, former domestic policy advisor in the Obama White House, and chair of the Aspen Institute’s Forum for Community Solutions, Plepler shared the stage with advisory council members Mark Tercek, president and CEO of The Nature Conservancy and Janet Murguía, president and CEO of the National Council of La Raza.

Barnes set the stage for the discussion when she suggested that “often those on the business side worry that stakeholders on the other side won’t speak our language or understand our objectives,” leading to reluctant engagement at best.

Plepler acknowledged that there had been internal resistance within Bank of America when the advisory council gained renewed importance in the wake of the global financial crisis. “In the early days, executives would say ‘we’re not coming to that, we’re just going to get yelled at.’ Today I get calls, I would like to come bounce ideas of the NCAC. It’s not everybody, but more often than not we get eager participation.”

Piepler says that the advisory council was “very proforma” in the years before the financial crisis: “We would bring non-profits together and we would report at them.

“Mark and Janet don’t always agree with us, but they always give us their opinion, and we listen to their advice and we are a better company as a result.”

Tercek and Murguía both told a similar story, acknowledging that the advocacy community does not always see eye-to-eye with Bank of America leadership, but insisting that the partnership has benefited both sides.

“There’s a big retail presence by Bank of America in our communities, and whenever there’s an opportunity to engage with someone in and around our community, we welcome that,” says Murguía. “To have a chance for direct and unfiltered conversations with leaders of these companies is extremely important. As long as there’s no quid-pro-quo, we would like to take opportunity to educate companies about the issues facing our community.

“For our community upward economic mobility is important. Our community is unbanked and underbanked and that makes them vulnerable. It’s important for a company like Bank of America to understand that. We can also educate them on immigration and education and health and other issues around community development. At the same time, it’s important for us to learn about financial sector, learn more about opening doors.”

Tercek, similarly, says the Nature Conservancy has benefited from the bank’s expertise. “One of our best ideas: we think a third of global climate challenge can be addressed by restoring nature at scale, restoring forests. But we need to be savvy about capital sourcing and about new business models and to brainstorm with Bank of Amercia on that is really invaluable.

“But the advisory council has all these other organizations. We have an urban program, we want the Nature Conservancy to be more diverse, so the opportunity to partner with Janet’s organization is very valuable.” Murguía, for her part, says that issues such as energy conservation and environmental impact are important to her members.

At the same time, all of those involved acknowledged that they deal with difficult issues on which there is unlikely to be total agreement.

“We are financing fossil fuel companies, or financing fracking,” says Plepler. “We believe the transition to a low-carbon economy is going to happen over time and we are not going to abandon clients in those sectors. But we have to ask how we can do it responsibly, how we can set up monitoring systems around deforestation, around safety issues in fracking. We may not exit the Keystone Pipeline but you may get us to think more about environmental risks and social risks. It’s better to have that conversa in a room of trust.”

Tercek says that “when we align with big business, some left-leaning environmentalists are suspicious of business and they want a lot of reassurances. We may not always get it right and the critical strategy is  transparency and communications, so that all of our stakeholders know what we are doing.”

“In order for us to ask business leaders for that favor, we need long term relationships,” he says, and so ongoing engagement is important.

Murguía was able to point to a perhaps more surprising example of engagement paying off, during the discussions around the Consumer Financial Protection Board, which the majority of financial services companies opposed.

“That was a very controversial entity, and nobody was jumping up and down and embracing this,” says Murguía. “It took the full table to engage Bank of America to say our communities are very vulnerable to predatory lending and that’s a threat to you and not just to us. And at the end of the day, while they did not necessarily agree with the way the legislation was written, they supported the CFPB.”

That was important for her organization, because “we have to be able to show some outcomes or results.” Other outcomes included changes in fees, improved access to capital, improved career opportunities.

Another win-win, Plepler says, came when Bank of America elected to introduce a no-overdraft account for customers who were being damaged by overdraft fees. “There were a lot of people internally who didn’t want to do it,” he recalls. “The investor relations people want to know how they were going to explain giving up those fees. We made the case internally that you shouldn’t want to work for a company that is over-reliant on those kinds of punitive fees. But now it has become a long-term solid product that holds up financially for us.”

One reason the National Community Advisory Council has worked is that it has the clear support of Brian Moynihan, the company’s chief executives. Says Tercek, “At the Nature Conservancy we are wary of these relationships unless the CEO is all-in.” And Murguía adds: “It’s not just the CEO. You want access to leaders at the very top, some of whom have specialist expertise we find very valuable.”

Moynihan’s support, and his belief in the efficacy of the advisory board, means that Plepler and his team have had some latitude to operate while metrics catch up to the work that is being done—although there have been questions.

“During the financial crisis, people would come up to me internally and ask me, ‘where are your friends?’” Plepler says. “They were complaining that nobody stands up for us. There was this notion of funder-supplicant dynamic, this cultural belief that because you support these groups they should stand up and say whatever you want them to.

“This is a partnership. This is not a philanthropic transaction. We are investing in a relationship. But when there are issues that are controversial, we can call on these organizations to give some context. They won’t be apologists for us, but they can provide context and do it authentically.”

And there have been clear benefits in terms of employees.

“This is very important to millennials and their employee satisfaction,” says Plepler. “They want to work for a value-based, purpose-driven company. Our employees like that we are engaged with organizations that they identify with in their private lives.”

Meanwhile, formal metrics are catching up.

“This is a rapidly evolving space,” Plepler says. “There’s a thirst for metrics that align reputation, growth and stock performance. We are looking at things like the Dow Jones Sustainability Index, Sustainalyitcs. We do pretty well on those metics, and relatively better than our peers. And our own research group has put out a paper looking at ESG [environmental, social and governance policies] and stock performance and companies that do this well are doing better over the long-term.”