Please refer to our Privacy Policy for important information on the use of cookies. By continuing to use this website, you agree to this.
Home Latest Aspen: Empower Authentic Voices To Counter Online Hate 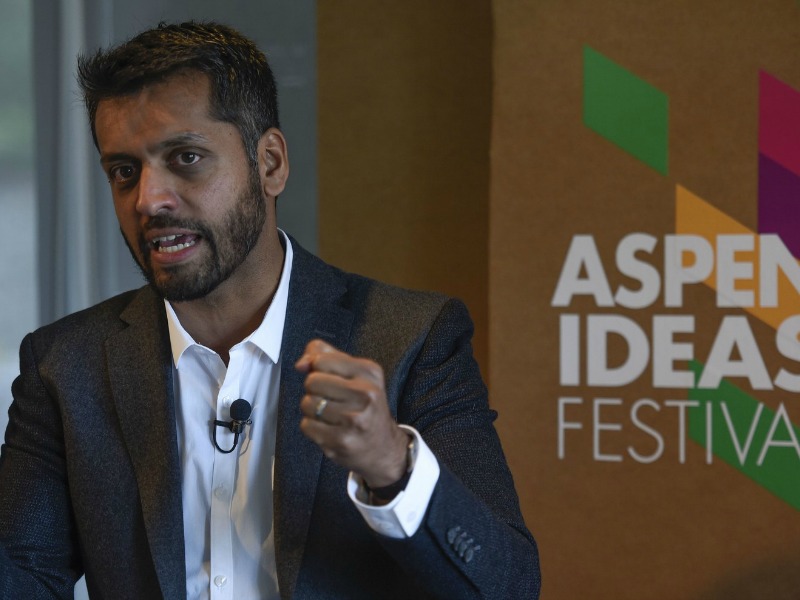 “We need to find moderates who are just as passionate as extremists,” said one panelist. Then we need to find ways to empower them and train them to use social media to create alternate narratives.

“In marketplace of free ideas, the story that is crafted well and the story that sticks finds its audience,” Wajahat Ali (pictured), op-ed contributor to The New York Times, told a session on “Hacking Hate and Extremism” at the Aspen Ideas Festival today. The answer, he says, is to empower authentic community messengers and train them in social media tools to craft alternative narratives.

Steve Clemons, Washington editor at large of The Atlantic, had kicked off the conversation by suggesting that digital and social media—originally viewed by many observers as media that would connect people of different nationalities and beliefs—had become a source of division, before asking panelists what could be done to counter hate on the web.

“Social media is a tool and a tool is a beneficial or detrimental as the person who uses the tool,” said Ali. “The irony is that these tools were supposed to open up society, to let us connect with people who are different, to Skype with a refugee in Afghanistan. What we have seen instead is the social media have further isolated us.

“Most people use Facebook to connect with people, many people use it share photos of their dogs and cats. The reality is that it is a very small number of people who are deeply connected, highly organized, and highly motivated to deliver an extremist agenda on social media. But six of those people can have more impact to 600 people who I call ‘flabby moderates,’ and so they have disproportionate influence.”

Haris Tarin, a senior policy advisor with the US Department of Homeland Security, agreed: “Social media did not create hate and extremism, we have had this throughout our history,” he said. “We have history of white supremacy in this country, the KKK, anarchists, animal rights activists, anti-abortion activists. Hate is not new, and violence based on that hate is not new. But social media have exaggerated it to such extent that it seems overwhelming for that flabby majority

“The KKK was local, it recruited people one-on-one in community centers. ISIS, Al Qaeda, today’s white supremacist groups have a platform. They can put out a video that millions of millions of people can see. We all see this and we think this problem is bigger than it actually is.”

Challenged by Clemons over the inability of the US government to counter the tide of online hate in the 16 years since the 9/11 attacks, Tarin suggested that until recently the priority had been counter-terrorism, and that government bureaucracy had found it difficult to keep up with a fast-changing social media world.

“If you go back to 9/11, Osama bin Laden didn’t have the internet. He had a video camera, he shot footage and then he sent it out via mail courier, and the message was two months old by the time the world saw it. Today we have Twitter and Snapchat and Whatsapp and ISIS and others can deliver the message in real-time.

“The government can convene and it can empower, but it can’t do the work. We need people on the ground who are moderates but who are just as passionate as the extremists. Those people can create counter-narratives.”

Ali suggested both a long-term solution—“it’s teaching digital literacy right next to mathematics and literacy from an early age”—as well as some immediate priorities for countering hate. “We need to amplify voices that are authentic, to bring people together who are truly representative of their communities and who can push back against the narrative.”

He cited work that he had done in partnership with Facebook and Google at a grassroots level in countries like Bangladesh, the Philippines and Tunisia.

“Government solutions to this fail because the strategies are so lame, so disconnected from the community, and people laugh at them,” he said. “You don’t have to counter violent extremism, you have to provide an alternative. So we went to people in the local communities, we talked to techies and grassroots leaders, to activists and journalists and young people, and we brought them together for a three-day hackathon to address the most pressing local challenges in their own ways.”

They came up with apps to help people discuss issues like mental health, with a digital comic book that depicted a Bangladeshi superhero saving Bangladeshis, or in Tunisia—where a high number of young people have left the country to join ISIS—suggested entrepreneurial programs to create better economic opportunities.

Facebook has agreed to fund some of those ideas, and is doing some extremely interesting work to address the rise of hate—after facing much criticism for failing to police hate speech online.

“For Facebook, the vast majority of people come for positive purposes,” said Parisa Zagat, head of global counter-speech programs at the company. “They come to build communities, to share, to connect. A very small number of people use Facebook for hateful purposes, but for us the safety of our community is critical and so we have content policies, we have community standards. We don’t allow hate speech, we don’t allow violent organizations.”

At the same time, she said, the company believes there is a key role to be played “pushing back and raising up moderate voices. How do we empower credible speakers to make sure a positive counter-message is enabled? There are people all around the world who are looking to make a difference.”

And so the company has provided training for NGOs and community leaders, focusing on issues such as how to create counter-speech and how to use the platform effectively. There is also a university program in which student teams from around the world create campaigns to push back against hate and extremism.

All of these efforts need to work to bring people together.

“ISIS not trying to destroy any specific government,” said Tarin. “They may say that’s their goal, but that’s not their goal. The goal of violent extremism of all kinds is to impact social cohesion negatively. Their goal is to make sure people don’t trust each other, so that when you look at me you don’t trust me and I don’t trust you. Our best response is maintaining that social cohesion, and that happens at the community level.

“If we focus on American Muslim community we will be ineffective. It’s not one community, one religion, one ethnicity. Muslims are one of the most integrated communities in this country, although by press coverage you would not know that. It’s important to get this right domestically so we don’t marginalize the communities we need on our side. What we need to focus on is empowering and engaging.”