Please refer to our Privacy Policy for important information on the use of cookies. By continuing to use this website, you agree to this.
Home Latest Aspen: Find Common Ground, Express Empathy To Overcome Climate Skepticism 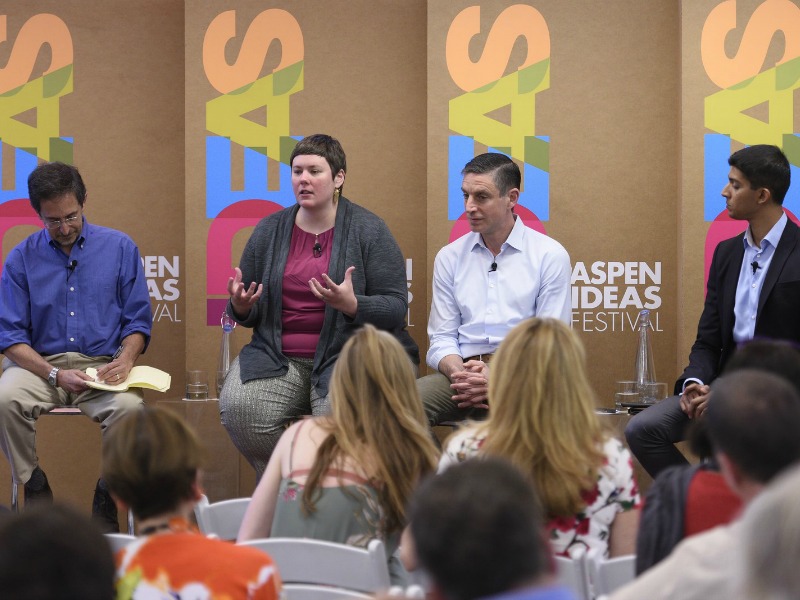 To change minds on climate issues, scientists need to understand that facts don't move people, and instead focus on finding common ground and showing empathy.

“Finding common ground and having empathy with people” is the key to making progress on climate change, University of Maine assistant professor of paleoecology Jacquelyn Gill told an audience at the Aspen Ideas Festival this morning, during a session focused on “Thirty Years of Climate Change: What Will the Next Three Decades Bring?”

Andrew Revkin, senior reporter for climate and related issues at ProPublica, and a 30-year veteran of reporting on climate issues, framed the discussion by pointing out that scientists look at climate changes in 30-year increments, and by pointing out that the current “climate wars” began almost exactly 30 years ago, when global warming first became a front-page news story and the United Nations convened the Intergovernmental Panel on Climate Change.

Revkin also cited work in the social sciences demonstrating that a pure evidence-based approach to changing minds on climate change and other controversial issues is largely ineffective (something we wrote about here): “What you believe about climate change is not about what you know; it’s about who you are. It’s part of cultural identity, and you are not going to change that.”

Gill acknowledged that “as a scientist, it has taken me a long time to get to grips with the idea that facts don’t work. One of the things we have to learn as scientists is that the ivory tower model of doing your science in isolation is not working. We are learning a lot in terms of cognitive science about how to communicate effectively. We are learning that if I just give you the facts, that actually doesn’t work. Storytelling and empathy building—that’s where I come from.

“If you are not getting on the ground and talking to people about what motivates their decisions as consumers or voters, or about what they believe in terms of the science… that’s incredibly important. It comes down to questions of communication, coming to common ground and having empathy with people.”

It’s an approach, she said, that has created some problems for her with both fellow-scientists and climate activists. During a recent podcast, for example, she was discussing the fact that elderly people in rural Maine—where she lives—were moving back to coal because they found it more affordable than many of the alternatives. She expressed sympathy, based on her own experiences growing up in a family that often found it difficult to pay high energy bills.

“I was yelled at because I was not being alarmist… because I was not alarmed enough. A lot of the criticism I got—from people in my own ‘tribe’ on this issue essentially said that these people should move or die.”

Nevertheless, she said that connecting with skeptics is important. “Use whatever is relevant to your personal experience, or to the local community where you live: when the leaves are changing, when ice comes off the lake, those stories are things people in your community can relate to. Air quality and children with asthma, meeting people half way with things you both care about. Personal stories are very effective.”

“You have to figure out where you are going and then create the political will to get there,” said Varun Sivaram, acting director of the program on energy security and climate change at the Council on Foreign Relations. “As academics, we sometimes do the first without thinking about the second. As a result, we may not have done a good enough job communicating, because the folks who are galvanizing people to action may not be galvanizing the right kind of action. We need to bring those two groups together and communicate more effectively.”

One issue that concerned him, he said, was the drive toward 100% renewable energy, which has been championed by Stanford scientist Mark Jacobson and others in the environmental movement. “I know the 100% renewable goal has had a galvanizing effect, even thought I don’t think it’s the right place to be going. But if it leads to right near-term actions, I ask myself, should I be on board? Ultimately, I have decided that I want to be academically honest, then determine the best strategy going forward based on that.”

Michael Greenstone, Milton Friedman professor in economics at the University of Chicago, and a former advisor to the Obama administration on climate change, had slightly different—and perhaps more hard-nosed—advice.

“The last 30 years have been characterized by this idea that two degrees celsius is really, really bad,” he said. “But it’s a unit that people don’t understand and there’s no impact associated with it…. At the end of the day we have failed to communicate the who, what, where, when and why of climate change. There are great opportunities to communicate what climate change will look like that will help build political change.”

His work with the Obama administration focused on the social cost of carbon: his group eventually concluded that the social cost of releasing additional CO2 was approximately $42 per ton. Several publicly-funded initiatives—from residential energy efficiency programs to subsidies for electric vehicles—seem expensive in that context, Greenstone said, and that fact needs to be acknowledged by those promoting change.

“What I have found is that the simple idea that we should do things that are beneficial and not do things that are not beneficial has gotten lost. People who are interested in mitigating risk need to evaluate policies and ask whether they are good policies. Some people have lost the thread on how much these programs cost.”

Sivaram agreed: “The hardline climate extremism that doesn’t put a dollar value might lead us to some bad policy solutions.”