Please refer to our Privacy Policy for important information on the use of cookies. By continuing to use this website, you agree to this.
Home Latest Bell Pottinger Eyes New Management And Sale In Fight For Survival 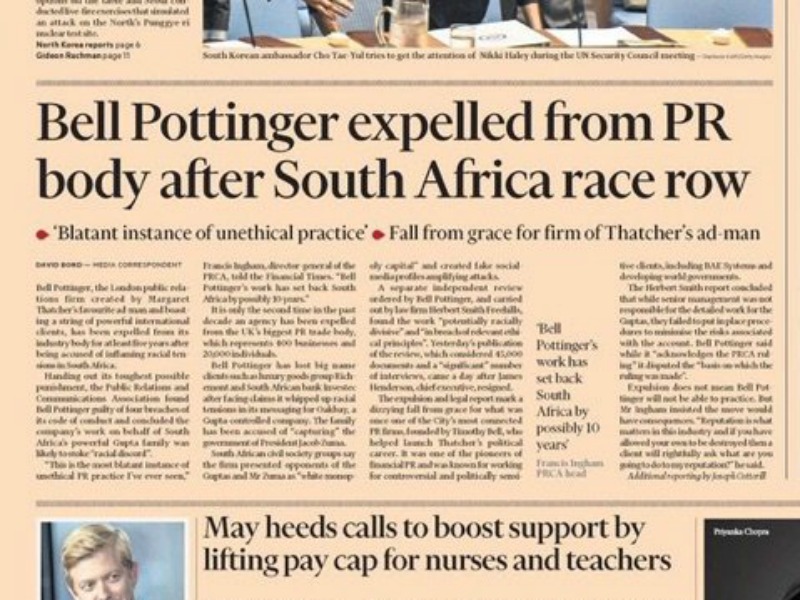 LONDON — Beleaguered UK PR firm Bell Pottinger is set to unveil a new management structure as it attempts to sell a business that has been deserted by a key investor and several clients in the wake of its racially divisive campaign on behalf of South Africa's Gupta family.

A Bell Pottinger spokesman told the Holmes Report that the new management structure is being put in place this week, with a rebranding also "likely". He also said that new ownership options are being pursued after accountancy firm BDO was hired to explore a sale of the business.

However, contrary to published reports, Lewis PR CEO Chris Lewis told the Holmes Report there is "not a chance" he will bid for the business. Bell Pottinger's revenue was estimated at around $50m in 2016 by the Global PR Agency Rankings, with the firm employing around 250 people at that time.

The latest measures come as Bell Pottinger continues to dominate the front pages of the media for the third consecutive day, an almost-unprecedented phenomenon for a PR firm. "They are haemorrhaging good staff", said one former client, who asked to remain anonymous. "I think the decline is terminal."

The bank, which previously enlisted Bell Pottinger in London for short-term media engagement campaigns, confirmed that it has stopped working with the firm. It is understood that the Bell Pottinger's expulsion from the PRCA earlier this week triggered the decision.

Temasek corporate communications chief Stephen Forshaw also confirmed that his company was no longer a client of Bell Pottinger's, as the industry rapidly moves to distance itself from the firm. Richard Edelman yesterday described Bell Pottinger's expulsion from the PRCA as a "proud moment for the industry," while many senior PR figures have publicly applauded the decision.

Meanwhile, WPP-backed Chime Communications has confirmed that it no longer holds a 27% stake in Bell Pottinger. It is understood that the stake was returned without compensation two weeks ago.

Bell Pottinger is currently without a CEO following the resignation of James Henderson, who retains 37% ownership of the agency alongside his fiancee Heather Kerzner. Another shareholder — Mark Smith — remains in place as chairman, but a number of senior figures have departed the agency in recent days, including corporate and financial head John Sunnucks — one of Bell Pottinger's key rainmakers.

The Bell Pottinger spokesman added that the firm would implement "strong measures to scrutinise work and build strong best practice culture". Despite being expelled, the firm will follow the PRCA code voluntarily, while employees may seek individual membership of the organisation. "There is a determination to learn from this."

PRCA director-general Francis Ingham confirmed that Bell Pottinger executives could seek individual membership, "but we have the absolute right to refuse membership at our discretion and without giving reasons."

"It's a right I am extremely happy to exercise," he added. "If they think it's a back-route in then they'll be disappointed."

Bell Pottinger still maintains profitable operations in the Middle East and Southeast Asia. In Asia, the business is led by Singapore-based chairman Piers Pottinger and CEO Ang Shih-Huei, while the Middle East is overseen by partner/MD Tim Falconer.