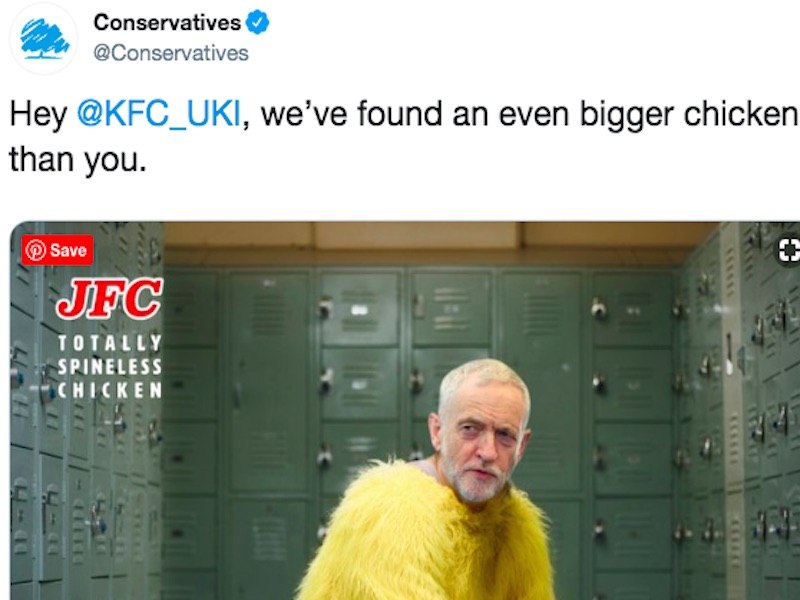 Brexit: A Masterclass In Reputation Mismanagement

Just as it looked like things couldn’t get any stranger, recent political events have made a laughing stock of the UK.

Once upon a time, there was a British television series called The Thick Of It. Written by Armando Iannucci, the satire centred around the dark arts and fire-fighting of government spin, headed by a creatively-blasphemous head of communications, Malcolm Tucker, whose furious outbursts rang through the corridors of Westminster and Whitehall at anything from the slightest hint of ineptitude to full-blown chaos – or “omnishambles” – from ministers and civil servants.

The Thick Of It (which yielded US spin-off Veep) sadly ended its run in 2012, but, however much its brilliant writing is missed, events in British politics in the run-up to and since the 2016 referendum on the UK’s membership of the European Union have now become far, far stranger than fiction, and have seriously dented the reputation of the ‘Mother of Parliaments’.

The traditional summer ‘silly season’ in politics and the media has outdone itself since the July arrival in Downing Street of Boris Johnson to replace the ineffectual Theresa May. Johnson (let’s not call him Boris, it makes him sound far too fun and harmless) has evolved, if that’s the word, from sandy-barnetted rogueish jokester, to Mayor of London, to one of the architects of Brexit, to unelected Prime Minister.

If global ridicule (and incredulity) about British politics and leadership (or lack therof) over the three years since the referendum wasn’t enough, recent events have somewhat accelerated the reputational fallout. Let’s take a look at the past week.

Its started with the government unveiling its £100 million ‘Get ready for Brexit’ propaganda campaign, by Engine Group, planned to run for the next few weeks over social, outdoor and TV with messages about how to prepare for a ‘no deal’ Brexit. Since MPs voted to block any chance of no deal the following day, Johnson has effectively spent £100 million of tax payers’ money on one day of preparing the country for an outcome that now cannot unfold.

On Tuesday, Johnson was so livid at losing that first vote that John Bercow, the colourful Speaker of the House (who keeps all the MPs in line), had to tell him to “be a good boy.” This is the British Prime Minister, being told off in front of the nation and the world like a tantrumming toddler.

On the same day, we were treated to the sight of Jacob Rees-Mogg, the so-called Leader of the House of Commons, lounging – the very embodiment of upper-middle-class Eton-educated Westminster bubble white male privilege – across the hallowed green benches of the chamber during a heated and urgent debate to stop a no-deal Brexit. His disrespectful demeanour inspired a viral meme in the now-close-to-hysterical bubble of politics and journalism Twitter.

We know that social media has a critical role in a crisis, so it was an interesting turn of events on Friday when the Conservative Party’s social media team, for reasons best known to itself, decided that it was a good idea to create a clumsy pastiche of a KFC campaign in which Jeremy Corbyn, leader of the opposition Labour Party, was photoshopped into a giant chicken costume.

They didn’t even bother to develop a proper acronym, labelling the picture JFC but spelling it out as “Totally Spineless Chicken,” an affront to advertising copywriters everywhere, and then (sharp intake of breath, here) had the gall to tag KFC UK & Ireland in a tweet saying: “Hey KFC, we’ve found an even bigger chicken than you.”

Quite apart from the fact that language pedants were riled that KFC isn’t actually a chicken, I can’t imagine a scenario where this idea (let alone tagging a global brand that always gets its tone on social absolutely right, even in a crisis) would get past the initial “blue sky, just chuck it out there guys” stage of a brainstorming session, let alone in such genuinely anxious times, but frankly, anything is now possible.

The PR industry on Twitter agreed, including W Communications: “If this was presented as an idea, even as a whim, in a creative session at W we would know that we had failed ourselves, and shamefully so.” KFC itself, of course, responded to the Conservatives in typically witty fashion, referencing UK political radio station LBC: “This is KFC not LBC don’t @ me.” Whether their lawyers are all “such LOLs!” remains to be seen. KFC’s ad agency Mother London settled for the simple “Delete your account.”

Fake fried chicken aside, the parliamentary plot twists continued. Conservative MP Phillip Lee destroyed Boris Johnson’s majority in the House of Commons by simply strolling across the floor to join the Liberal Democrats, and then Amber Rudd resigned from the Cabinet, accusing Johnson of “an assault on decency and democracy” and “an act of political vandalism”. The move prompted a rare public comment on her career from her brother Roland Rudd, the founder and chairman of Finsbury, who tweeted: “So proud of my sister. She’s principled, brave, honest and loyal to her friends.”

On Monday this week, Johnson fidgeted throughout a press conference in Dublin where he was owned by the Taoiseach Leo Varadkar over his approach to leaving the EU. On the particularly sensitive and intractable question of the Irish backstop and the absolute impossibility of returning to pre-Good Friday Agreement horrors, one journalist at the conference said: “Prime Minister, when you talk about people being found 'dead in ditches' there's a sense in this country that you really don't understand what's at stake here.” Johnson, the antonym of a diplomat, just rolled his eyes.

And as of Monday night, we’re now in the unheard-of situation where Parliament, only just returned from its summer break, has been suspended – or ‘prorogued’; nothing like a crisis for catapulting esoteric terms into the lexicon – for a further five weeks, ostensibly to allow Johnson time to hash out a deal with the EU that is more acceptable to MPs.

Proroguing parliament is rather like Netflix pausing Stranger Things suddenly in the middle of a season. Just as we’re glued to the unfolding drama, in dark, sticky and unchartered territory, we’re forced to wait, holding our breath, to see what cliffhangers the Brexit monster has in store next.

However (further plot twist) the legality of the prorogration has been called into question today, with Scotland's highest court ruling it illegal. This will now go to the Supreme Court, and the implications are serious: did the government mislead the Queen as to its reasons for shutting up shop?

Such is the whirlwind of British politics (the current response to the almost-constant breaking news alerts is basically ‘WTF is it now?’), that one Twitter japester quipped that BBC Parliament – usually a dry, tortoise-paced livestream of the House of Commons, the House of Lords and Select Committee hearings, unwatched by anyone apart from reporters, policy wonks and politics geeks – had become as unmissable and compelling as the UK’s ‘Love Island’ reality show.

There’s another layer underlying all of this: manipulated as it was by Leave campaign maestro Dominic Cummings (who, super-weirdly, appears to now be running the country behind the scenes) targeting marginal voters on Facebook by using research and data from Cambridge Analytica, the Brexit referendum has twisted the whole shape of political campaigning and audience targeting and messaging. This will cast a long, ugly shadow over the world of comms and public relations, in terms of trust and data security.

And beyond that, there’s the broader geopolitical context: the twin rise and rise of populism and activism. We’re all more polarised and tribal than ever before, and the neverending Brexit tug-of-war is both a catalyst for this, and proof that there’s no such thing as compromise or the middle ground anymore.

Against this backdrop, each and any of the vignettes from the past week would make a great premise for a hilarious episode of The Thick Of It, so it’s deeply unfortunate that we’re now beyond any level of satirical hot take on the state of Britain and its leadership.

Considering we’re a small island, Britain’s influence has been disproportionately significant throughout modern history. Much of it has sat on the cusp of glory and shame, depending on your point of view, values and interests. Empire, slavery, the arms trade and war are huge subjects, where Britain hasn’t necessarily demonstrated high standards of ethics, restraint or humanity.

But there are good stories to tell, too: for every shocking headline about racism and poor treatment of immigrants, to take one painfully topical example, there’s a tale of how refugees like my dad have been welcomed and treated with respect and care when they arrive on these shores. Politics aside, and without getting too “Cool Britannia” about it, Britain’s innovative and creative spirit has contributed enormously to the fields of science, design, technology, art and music. Ironically, our ability to continue that contribution, and to continue doing other positive things such as having the highest animal welfare standards in the world, is likely to be eroded by leaving the European Union.

The country’s continued reputation and standing, despite all of its hideous ‘mis-steps’, has owed much to the assumption – at home and away – that the oldest democracy on the globe has earned its right to have a significant voice and veto, to be listened to, and to play a leading role on the world stage. Now? I’m not sure anyone is convinced this is still the case.

The response from the European media to the latest events also indicates that the net reputational impact of Brexit among our neighbours is unequivocally negative. France’s daily Le Monde newspaper described last Tuesday as “another mad day in Brexitland,” while the Irish Times’ chief political commentator wrote a column headlined: “Welcome to the United Kingdom of Absurdistan.” Spanish daily El País said Boris Johnson was “babbling” and in Germany, Der Spiegel opined: “In defeat, some people become quiet and humble, but Boris Johnson is not known to be such a person.”

The Brexit farce has, perhaps fatally, corroded our influence, and led to the UK being seen as a nation that, rather than having the best sense of humour in the world, has become a joke itself. As far as our reputation and the future of British politics and democracy are concerned, the latest behaviour from our glorious leaders is, without a doubt, an omnishambles. One could even forgive European Commission president Jean-Claude Juncker for finally losing his patience and (to borrow a further expression from Malcolm Tucker) telling Britain, once and for all, to “come the fuck in or fuck the fuck off.”