Please refer to our Privacy Policy for important information on the use of cookies. By continuing to use this website, you agree to this.
Home Latest Canada's 'Shoppable Girls' Wins Best In Show At North American SABREs 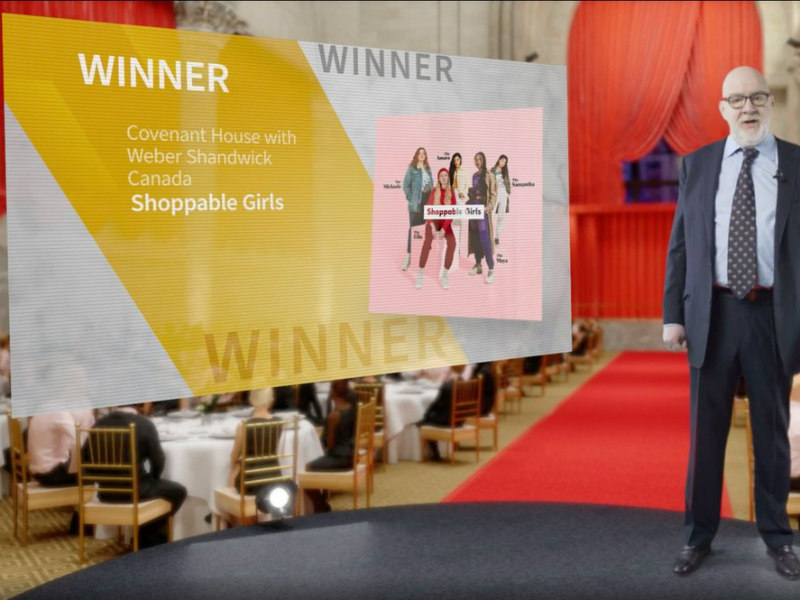 'Shoppable Girls,' a campaign conducted by Weber Shandwick Canada on behalf of non-profit Covenant House, was awarded the Platinum SABRE for Best in Show.

NEW YORK—“Shoppable Girls,” a campaign conducted by Weber Shandwick Canada on behalf of non-profit Covenant House, was awarded the Platinum SABRE for Best in Show at the North American SABRE Awards ceremony, which took place virtually on Tuesday evening.

The 'Shoppable Girls' campaign used digital ads and a pop-up in Toronto’s trendy Queen Street West shopping area to present young women as commodities similar to fashion or accessories, driving home how young women are treated and viewed by traffickers and generated massive mainstream and social media conversation around the issue. In the wake of the effort, the Ontario government pledged a $307 million investment to combat human trafficking.

'Shoppable Girls' beat out four other contenders for the Platinum Award. In order, they were:
2. From Marathon to Sprint—Meharry Medical College with Finn Partners
3. ASD: Rockin' the Spectrum—Jake’s House with Edelman Canada
4. Colors of the World crayons—Crayola with Golin
5. Go Near: Celebrating Local Travel Only On Airbnb—Airbnb with Weber Shandwick, DKC and others.

It was a good night for Weber Shandwick, which took home five trophies in addition to the Platinum award, and for Edelman and Kivvit, each of which picked up four Gold and Diamond SABREs. Other multiple winners included Finn Partners and Golin (three each); Allison Partners, C+C, FleishmanHillard, Highwire PR, ICF Next, Ketchum, M Booth, MSL and Zeno Group (two each).