Please refer to our Privacy Policy for important information on the use of cookies. By continuing to use this website, you agree to this.
Home Latest Cannes Day Two: Ketchum Leads PR Firms With Four Gold Lions So Far

Ketchum so far has won four Gold Lions while Weber Shandwick, Edelman and FleishmanHillard have also picked up an array of metal.

CANNES — Ketchum has emerged as the leading PR firm so far at the Cannes Lions International Festival of Creativity, wrapping up day two of the event with four Gold Lion awards.

Ketchum was awarded the Gold Lions, the event’s most prestigious award, for its PR work supporting campaigns in the health & wellness, outdoor and radio & audio categories. Three of those awards (one health & wellness Lions and two outdoor Lions) recognized the agency’s work with the National Safety Council’s “Prescribed to Death” campaign, which was led by Energy BBDO. The firm’s radio & audio Lions was for its PR role in the “Rest in Grease” campaign VML led for Wendy’s.

Other award-winning PR firms include Edelman, which has won a Bronze Lion and two Silver Lions. The Bronze Lions, awarded in the design category, recognized Edelman’s work with the yogurt company Chobani in its rebranding. The Silvers recognized Edelman’s work as partners in Cigna’s “TV Doctors of America” campaign and for supporting KFC’s Romance Novel Mother’s Day initiative.

FleishmanHillard, meanwhile, earned a Silver Lion as a partner driving awareness of Gatorade’s Beat the Blitz mobile game and a bronze for its Dublin office’s work with Roche promoting disease awareness and healthcare access.

Other winners include W Communications in London, which was awarded a Gold for its role in supporting Project 84, a purpose-driven art installation from the suicide-prevention organizations Calm.  Freuds will also be taking a Gold Lion back to London for its work surrounding KFC’s “FCK” campaign. DevVies Global won a Bronze Lion for working on Mucinex's #SupersickMonday.


Hill+Knowlton Strategies Amsterdam earned a Bronze for its work with telecom company KPN, while the trio of Jones PR, MSL and Powell Communications picked up Gold for their work promoting Down syndrome awareness. Alison Brod Communications shared in one of Weber Shandwick’s Burger King wins, and picked up a Silver Lion on its own, also for its Burger King work.  Bucharest’s Rogalski Damaschin PR earned a Silver Lion for its work with the NGO Magicmakers to drive support for Magic Home, hospital-adjacent housing for parents with sick kids.

Monday and Tuesday's winners were selected from the first round of shortlisted categories. Winners in other categories will be announced throughout the week. 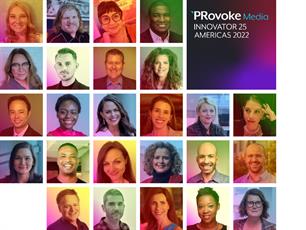 Innovator 25 2022: Change Agents Across The Americas

Our 10th Innovator 25 class showcases the changemakers that are advancing the industry at a time whe ...