Please refer to our Privacy Policy for important information on the use of cookies. By continuing to use this website, you agree to this.
Home Latest Cannes: “We Need To Measure What We Treasure” 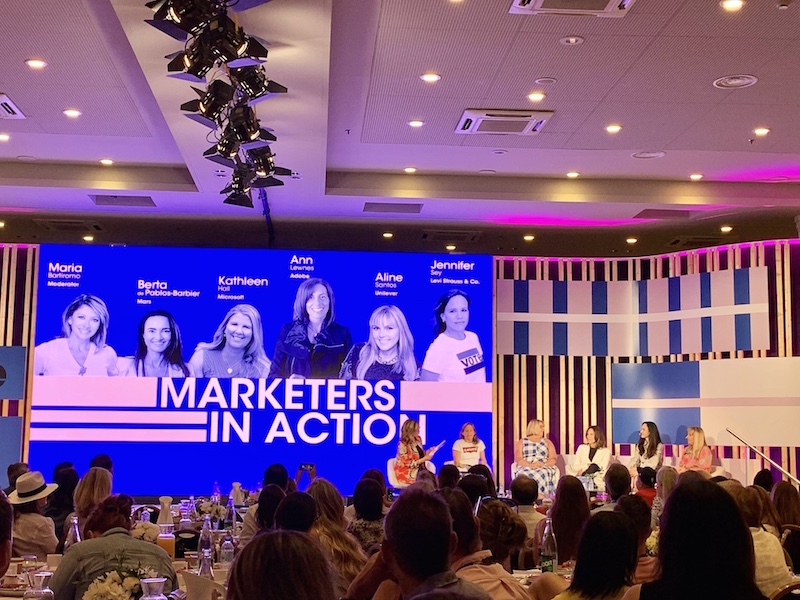 Cannes: “We Need To Measure What We Treasure”

An all-female panel of senior global marketers outlined the need for marketing to be truly representative and inclusive.

CANNES – Senior marketers used the Cannes Lions Festival of Creativity to outline the need for, and power of, marketing that is truly representative and inclusive.

Moderated by Fox Business Network anchor Maria Bartiromo, the group spoke at the annual IPG Breakfast, one of the highlights of the fringe festival and now in its ninth year with the theme of “With all due respect: turning intention into impact."

Santos said brands needed to “measure what we treasure”. “When we started this journey, and started learning from the Unstereotype Alliance about how to make better advertising that really represented people as they are or in a progressive way, as a result we saw ads with 37% more impact, that led to 28% more purchase intention and 38% more enjoyment. It’s not just a social issue, it’s a business issue.”

She said a commitment to diversity and inclusivity often led to brands having to take risks: “If we really want to shape culture and make an impact, we have to make big bets. Sometimes we don’t get it right. Running our transgender Brooke Bond campaign in a conservative society like India, for example, was a big bet. We lost a lot of consumers but we gained many more, and I think the ones we got are better people. It’s about normalising things in society and making invisible people visible. If not us, who is going to do it?”

Santos also told the emotional story of how the Dove marketing team had to persuade the Unilever board to go ahead with the now-iconic Dove Real Beauty campaign 14 years ago: “We found it really sad that only 4% of women around the world defined themselves as beautiful. We started to understand that we have been conditioned over years with a stereotype of beauty that was not accessible and so decided to show the beauty of real women. People in our organisation didn’t like that idea, so we had to be brave.

“We asked the wives of all the board members for permission to film their daughters and ask them how they felt about their own beauty. Every single one, even the most beautiful girls, felt horrible. Most cried in the interviews. We took the film to the board, and made them watch the reality, and there was not a dry face around that table. They realised we were onto something big and so we kicked off a campaign that started to represent the beauty of diversity. You have to believe in what you’re doing, to be brave, and to be creative.”

Other panel members also shared the bold leaps that they had made to change marketing strategy within their organisations.

At Levi’s, Sey said: “Fashion advertising is the worst because it’s created by men and embodies the idea that women get dressed to look sexy for men. When I started this job and saw ads of topless skinny women in jeans clutching a man on the back of a motorcycle, I thought ‘No fucking way.’ That’s not how I feel strong and powerful – when a woman puts on a pair of Levi’s she should feel like the most badass version of herself, not the most vulnerable.

“So we started from a different place in terms of the stories we tell, not from that construct. We ran a campaign celebrating the hard-won right to vote, for example, showing all kinds of people, not just sexy women.”

But Sey agreed with Santos that it wasn’t always the easy path: “It does have impact on the business and you have to be courageous and choose the hard right over the easy wrong. It’s not just about the top and bottom line: we have a duty as leaders to do the right thing.”

Adobe’s Lewnes said the lack of gender equality in both advertising and creative agencies continued to be an issue: “We did a survey in the US, the UK and Australia and found that 61% of people find diversity in ads important and that 34% of people will boycott a brand if it doesn’t represent them.

"But women are under-represented in creative agencies – 25% think their gender will hamper their career and 41% of female creatives don’t see women in leadership positions in agency. We want to encourage and celebrate women, to employ women in creative fields, and to reflect that in the work.”

At Mars, de Pablos-Barbier said brands being honest about the extent to which images and stereotypes in their marketing were falling short of diversity and equality was a critical first step to making changes: “We’ve started asking how all our award-winning creative is shaping society. We are above average, but the average is really low.

"For the first time, we’re not saying we’ve done a good job, we’re saying we’re not good enough and that we’re serious about fixing a problem we’ve been part of.”

And Microsoft’s Hall also admitted that the company had not done enough via its marketing to address the societal issue of lack of women in technology: “We looked at why we weren’t hiring enough women. Somewhere along the line at school they end up being the only girl and don’t want to do it anymore, and we weren’t doing enough to include girls and women in advertising.

"We’ve changed that, and we now have an all-female executive creative team. Girls can change the world, but we have to really poke at them so they can understand they can be the scientist that makes the change.”