Please refer to our Privacy Policy for important information on the use of cookies. By continuing to use this website, you agree to this.
Home Latest CEOs Play A Crucial Role In Enhancing & Maintaining Brand Value, Global Study Finds 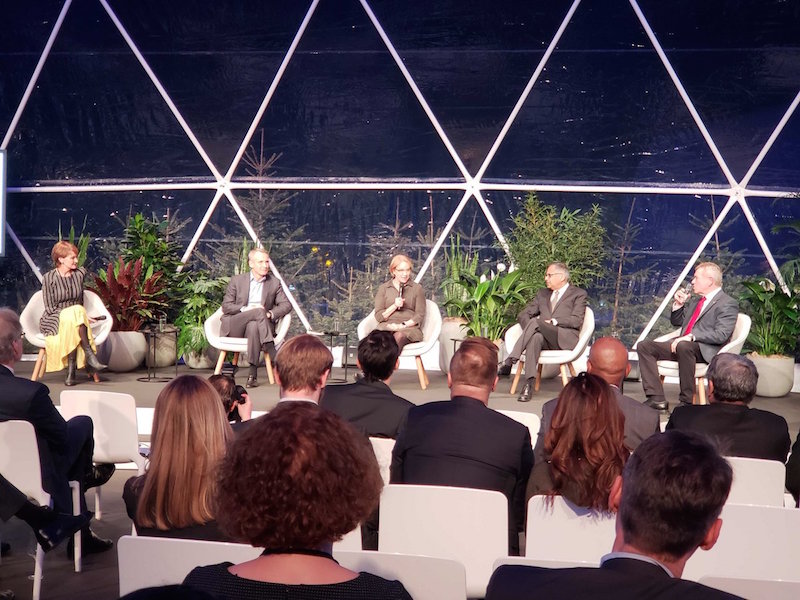 Brand Finance research names Ferrari as the strongest brand in the world, as business leaders in Davos debate the role of CEOs in brand value.

DAVOS — Ferrari is the strongest brand in the world, according to the annual Brand Finance Global 500 report on the world's most valuable brands across all sectors and countries, launched in partnership with Tata Consultancy Services at the World Economic Forum this week.

Based on a scorecard of metrics evaluating intangible assets, marketing investment, stakeholder equity, and business performance, Ferrari was one of only 16 brands in the 500 companies ranked to be given a AAA+ rating by Brand Finance, and overtook the likes of McDonald’s, Coca-Cola, Lego, and Disney in terms of brand strength.

While the Italian car manufacturer is rated as the strongest brand, Amazon is once again rated as the world’s most valuable brand, with Apple and Google placed second and third.

The Brand Finance Global 500 is dominated by American businesses, and technology, infrastructure and telecoms companies, although content providers are coming up the ranks. Two Chinese companies have also entered the top 10, both banks: ICBC and China Construction Bank – and this was identified as one of the biggest trends in the research. China’s answer to Netflix, iQiyi is the world’s fastest-growing brand of 2019, up 326% year on year, and WeChat ranks 21st.

“Ten years ago, the value of Chinese brands in our top 10 was $48 million, it’s now $1.3 trillion,” said Brand Finance CEO David Haigh. “There are 80 Chinese brands in the top 500; they are heavily skewed towards banking, insurance, real estate and cars, but China is increasingly moving into other consumer industries. I think over the next four or five years our table will reflect Chinese consumer brands coming strongly into Western markets.”

Haigh also predicted that global superbrands Microsoft and Apple may have plateaued: “I think they have achieved what they are going to achieve and the real growth will probably be elsewhere.”

He said assessment of the contribution that brand makes to a company’s value had gone from being seen as “black magic and hocus pocus” when he founded the firm in 1996, to being a credible assessment of the true value of a company and was also a good predictor of likely future performance.

“Stock market prices tend to be very volatile but analysis of brand strength and brand value tends to be much more stable,” he said. “If you look at the stock market during the last decade, intangible asset values were something like 60% of global valuations. In absolute terms the total value of intangibles is something like $55 trillion, and a large proportion of that is brand. And it’s very clear from our analysis that strongly-branded companies outperform stock markets by up to 100%.”

Haigh also underlined the importance of brand and marketing teams having a seat at the top table: “Corporate strategy and brand strategy have to be aligned. You would say that was obvious, but we have so many clients where the brand department and marketing department are not even brought into the discussion of what the corporate strategy is, or are told it is confidential, and yet are expected to manage the brand.”

Also launched at the event was the new Brand Guardianship Index: Brand Finance’s ranking of the top 100 brand champions among the CEOs of the world's most valuable brands. Jeff Bezos, CEO of Amazon, is rated as the world’s best brand guardian, reflecting his success in marketing investment, stakeholder equity, and business performance. He is followed by Akio Toyoda at Toyota and LVMH’s Bernard Arnault.

The launch of the research was followed by a panel discussion on the evolving role of CEOs in shaping brands and reputation, with Cathy Bessant, chief operations and technology officer at Bank of America;  Natarajan Chandrasekaran, chairman of Tata Consultancy Services’ holding company Tata Sons; Kylie Wright-Ford, the CEO of Reputation Institute, and Jonas Prising, CEO of ManpowerGroup.

Wright-Ford said there had never been a more important time to talk about the role of CEOs in terms of company reputation and their own reputation: “It is a precarious time. This time one year ago, in January 2018, 132 CEOs left their posts, some of them under very difficult conditions, eight of them under transgressions. Ten left under difficult circumstances and 21 were replaced by their boards. That is the highest movement in CEOs that we have seen for eight years. This is not a time for your CEO to be sitting back. It is a time to be vocal, a time to be out there.”

At ManpowerGroup, Prising said one of the biggest challenges for CEOs in being vocal, however, was navigating when to speak up, whether restricting opinion to topics that were clearly related to the business and its values, or going further to talk about wider social and political issues: “It has to be authentic. There might be a temptation to confuse your brand with positions that might not be representative, or not true to who you are as an organisation or what you stand for.”

Bank of America’s Bessant added that citizenship and governance should not be in conflict: “Taking a stand on things –  citizenship – is important. I would say politics is a dangerous place to be making a stand unless you are really sure and it does align to your values, but don’t let it conflict with governance. When it becomes tangled, I think it becomes very tricky, very fast.”

Bessant also said corporate and CEO reputation were at the heart of strong brands: “It is not advertising that produces great brand and reputation, it is trustworthiness, credibility and delivering against a brand promise. I think we have seen many stories in the last several years of what happens when CEOs don’t safeguard their own brands or the brands of their corporations, or where corporations don’t live up to the trust that is instilled in them or bestowed upon them by the marketplace and the constituencies and the stakeholders they are trying to serve.”

And at Tata Sons, Chandrasekaran said that as well as transparency and trust, clarity on where a CEO stands was crucial for corporate reputation: “Any matter that you talk about probably falls into two categories: it’s either an issue that is value-based or it is a business view. Most of the time, the CEO’s view is the company view, taken from stakeholders, employees, customers and society, and that’s the leadership that everybody is looking for from the CEO.