Please refer to our Privacy Policy for important information on the use of cookies. By continuing to use this website, you agree to this.
Home Latest CMOs At Davos: The Challenges Of A Communications Pivot 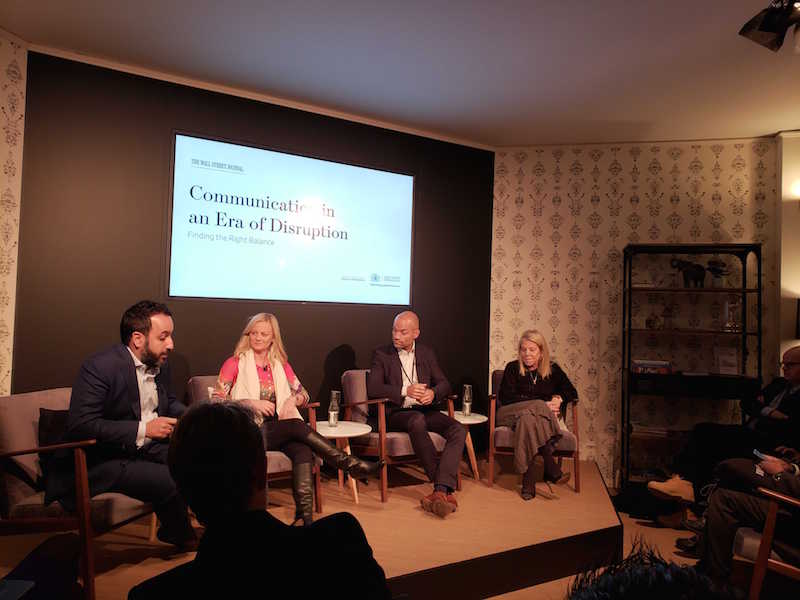 CMOs At Davos: The Challenges Of A Communications Pivot

In a Wall Street Journal session at the World Economic Forum, SAP, Philip Morris International and Storyful looked at what happens when brands change the message.

DAVOS — Brands must strike the right balance between data and human understanding when making decisions about messaging, according to communications leaders at the World Economic Forum this week.

Speaking at a Wall Street Journal session on Communication in an Era of Disruption, Marian Salzman, the SVP of global communications at Philip Morris International, which is in the process of transforming from a cigarette manufacturer into a smoke-free company, said: “We have invested $4.5 billion in the science of getting it right as we move towards smoke-free. But I think we’ve been somewhat deficient on the emotional side because we put all of our stakes in being sure we had the data right, and now we have to invest our hearts and souls in understanding the hearts and the minds of the people we need to come along with us on this journey.

“You can have all kinds of playbooks and legal guidelines but at the end of the day it comes down to how you engage with people. It’s important that we understand some people are really against cigarettes but they still love people who smoke. So we need to hear that and incorporate it into real time messaging and real-time conversation on Twitter.”

Salzman added that even PMI’s substantial pivot had its limits: “In a heavily-regulated environment you have some help from lawyers, so a lot of your message comes from guidelines. But the gutsy part is deciding how far you are going to push it. We’ve re-entered civilised society, but the one thing that we can’t change is that – whether we sell cigarettes or somebody else does – people are going to buy cigarettes. You’ve got to be prepared to get in there and just say I’m going to make the biggest difference I can. But it would be incongruous if what we did is turn around and higher platform into sustainability.”

SAP’s chief marketing officer Alicia Tillman said the company’s shift from just targeting enterprise decision-makers to consumers was also a work in progress: “We’ve invested billions of dollars invested in our value proposition, but SAP is still known as a company that primarily sells to the chief innovation officer. Talking to consumers – because they are the users of our technology, even if they’re not the decision makers – goes outside of the realm of pure B2B communicating and marketing, and making that shift has been an incredible journey so far.”

Tillman said SAP now effectively had two message streams for B2B and B2C audiences: “One message strategy is focused on how our technology helps you achieve corporate goals, which are often about transparency, savings and control, and we have to balance this with messaging around the more consumerised user experience, which has to be exceptional, it has to delight, it has to energise, it has to surprise and it has to help every single employee be successful.

“There’s a playbook but the most important thing for us is to recognise we live in a B2C2R environment – where we go business to consumer to regulator – and that’s a new format for me.”

“The positive is that there is a much more information out there so you can be better informed. Before you do anything, there is an opportunity now to look before you leap, and understand what the opportunities and threats are – and that you might get caught in a difficult situation or an issue or conversation that you really had no intention of being part of. If your positioning is incongruent with your consumers or your C-suite or your executives people are going to find out and they are going to talk about it and it will spread.

With the live Gillette case sudy currently playing out, and with reference to last year’s Nike campaign, the panellists also cited examples of other brands who had survived a significant message pivot.

“I think sometimes companies find themselves having to deliver a new message even when they weren’t intending to,” said Farjami, citing airline Delta’s announcement that it was cutting its discount for NRA members after the Parkland school shooting last February, despite a backlash from state legislators which led to the removal of a huge fuel tax break.

Tillman held up Mattel’s transformation of its messaging around the Barbie brand in 2015, with the launch of the Imagine the Possibilities campaign that told children they could be “anything you want.”

And Salzman recounted the experience of working for a failing Apple, just before it launched the computer that would become the first iMac: “Suddenly you had a CEO with the balls to do the right thing, which was recognise the company’s point of differentiation and hold true to that even when there was no new product. To me it’s about guts: the ability to look at yourself in the mirror and say: ‘I can survive a fail,’ and that empowers you to go and do things in a new and different way.”