Please refer to our Privacy Policy for important information on the use of cookies. By continuing to use this website, you agree to this.
Home Latest Consulum Exits As 'Relaunch Hong Kong' Campaign Makes Faltering Start 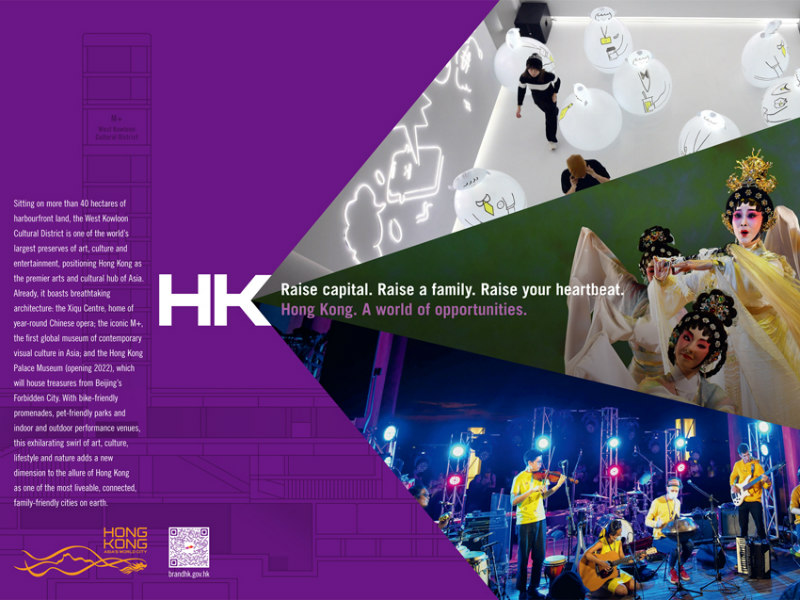 Consulum has effectively shuttered its Hong Kong office, 18 months after it was hired for the troubled $5.7m 'Relaunch Hong Kong' assignment.

Eamonn Fitzpatrick, who joined Consulum Hong Kong as partner in August 2020, left this month to resume his political consulting career in Australia. His exit follows that of partner Rob Shorthouse, who departed Consulum in September, when the firm first began scaling back its presence in the city.

Calls to the Servcorp serviced office facility where Consulum based its Hong Kong operation revealed that there are no staffers left. A Servcorp receptionist added that Consulum's office "is no longer here," 18 months after it was hired to handle the SAR government's $6m 'Relaunch Hong Kong' assignment.

Former associate director Chloe Deng has also left Consulum, joining PwC this month as government affairs manager. Deng, along with Shorthouse and Fitzpatrick, was one of six hires that Consulum made to staff up its Hong Kong office. Other ex-staffers included Agnes Tsang, now head of external affairs at Rosewood Hotel Group, and Maï-Linh Florentin.

In July, Hong Kong's Information Services Department (ISD) chose not to renew Consulum's lucrative 12-month contract. Since then, pro-establishment lawmakers have questioned the value of the campaign, which remains in limbo, claiming that the HK$44.3m ($5.7m) budget represents a waste of public money.

Consulum, best known for its work on behalf of the Saudi Arabian government, established its Hong Kong office on 15 May 2020, the last possible date to establish a presence in the city according to the Relaunch Hong Kong tender criteria. The company director was initially Matthew Gunther Bushell, the ex-Bell Pottinger veteran who co-founded Consulum with Tim Ryan in 2012.

However, Consulum's Hong Kong directors are now listed as Ryan Coetzee, the former political strategist who is understood to have succeeded Gunther Bushell as Consulum CEO, and managing partner James Davies. The firm's website still lists a serviced office in one of Hong Kong's most expensive commercial buildings. Coetzee did not respond to request for comment.

Despite spending $5.7m, the Relaunch Hong Kong campaign has yet to launch in full, with government officials blaming the Covid-19 pandemic for delays. However, the ISD does appear to have quietly rolled out a "business confidence" repositioning initiative at the end of last year (pictured). While the "world of opportunities" tagline is new, the campaign messaging and advertising are those developed by Consulum, built on the notion that "Hong Kong is the only city in the world that offers a secure, dynamic environment for business, an exciting, cosmopolitan lifestyle and direct access to the Mainland market."

"Due to lingering uncertainties about the Covid-19 situation, we will take a phased approach for the rollout of our publicity plans," said an ISD spokesperson. "Some of the advertising and publicity materials developed by our contractors have been used for the publicity campaign overseas to reinforce Hong Kong's image as the best place in Asia to live, work and invest in, and pave the way for the Relaunch Hong Kong [campaign]."

However, thanks to its 'zero-tolerance' Covid-19 policies, Hong Kong remains one of the world's most isolated cities, with recent international coverage dominated by reports of a potential business exodus. The ISD spokesperson added that "the actual implementation timeline, scope and scale of Relaunch Hong Kong will largely hinge on the global Covid-19 development and the recovery of business activities."

Last week, Factwire revealed that the ISD website had uploaded summaries in 2021 of the two waves of research conducted by Consulum to understand international attitudes towards Hong Kong. Notably, respondents in 10 of the 14 countries surveyed think that Hong Kong is heading in the wrong direction, with sentiment considerably more positive towards rival cities Shanghai, Seoul, Singapore and Tokyo.

A Consulum slideshow, also reported by Factwire, provides further detail, noting that the damage to Hong Kong's brand caused by social unrest had been exacerbated by the National Security Law, which came into effect in June 2020. Consulum advised that messaging must separate Hong Kong's politics and security from its benefits as an economics and lifestyle destination.

PRovoke Media has obtained a copy of the messaging book developed by Consulum for the business confidence campaign. The book features numerous suggested "proof points" to support the four key messages of the Relaunch Hong Kong campaign, which it claims have drawn "overwhelmingly positive responses" from those surveyed. However, Factwire reports that the messaging received low "believability" scores in Japan, Germany and the UK. 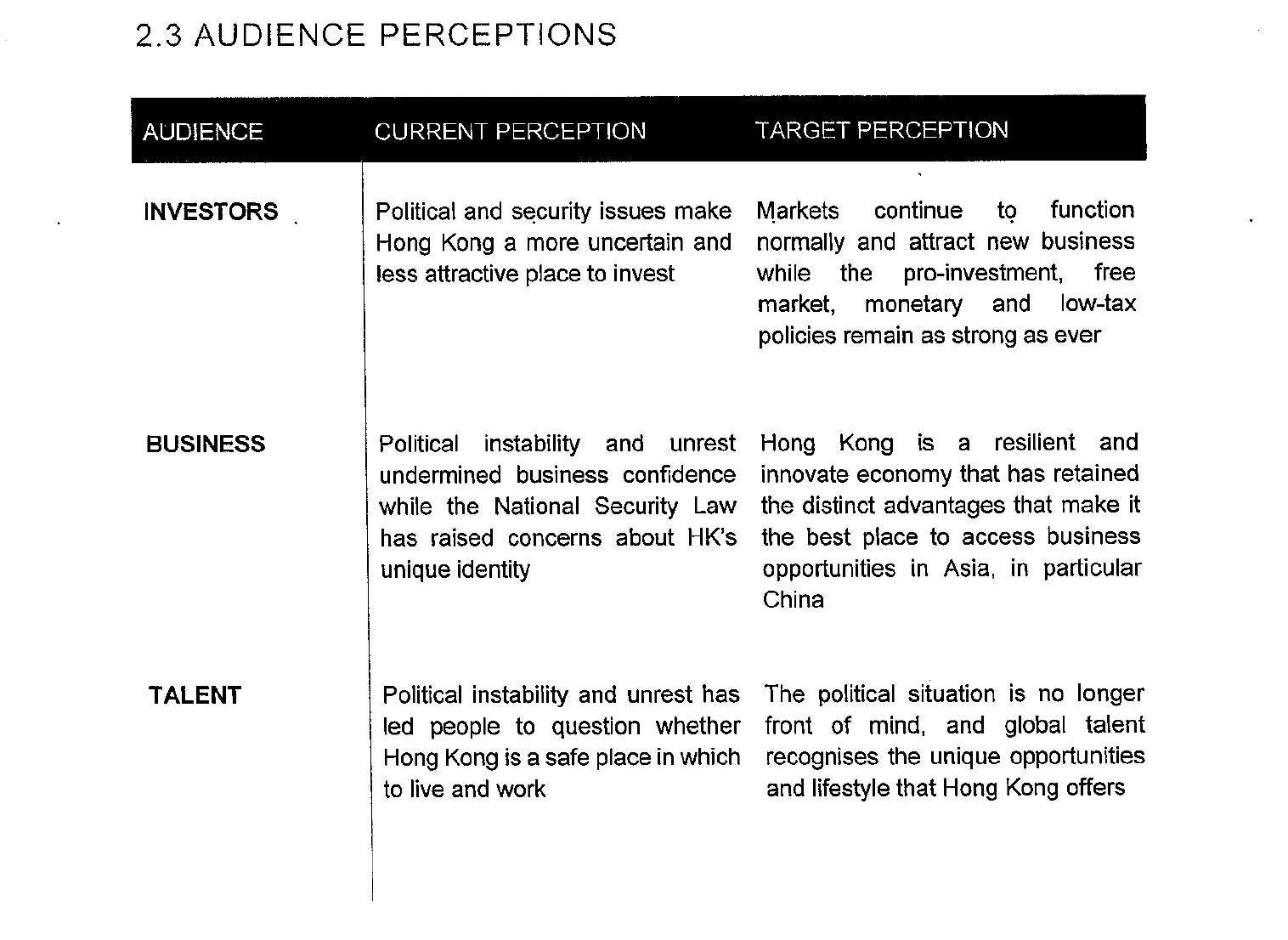 The messaging book also reports that political instability and unrest have significantly impacted perceptions of the city among international businesses, investors and talent. To counter this, the "proof points" highlight Hong Kong's global connectivity, access to China, research and innovation credentials, and lifestyle appeal — including food, art and hiking.

In August, Undersecretary for Home Affairs Jack Chan Jick-chi was forced to defend Consulum's hire, when lawmakers criticised the project's messaging and budget. Two lawmakers, reports Factwire, this week questioned why the ISD had uploaded the research report to its website without informing the public.

More recently, Brett Free retired from his role as deputy director at Hong Kong's Information Services Department, after leading the process to find a global PR agency in 2019, following up that failed effort with the controversial hire of Consulum in 2020.

Consulum has faced considerable scrutiny for its work in Saudi Arabia and its selection in Hong Kong. The low-profile firm has defended its reputation, earlier telling PRovoke Media: "We operate at the pinnacle of our industry and with the highest standards and integrity, which is the very basis upon which Consulum was founded."

The firm is thought to employ more than 85 staffers across London, Dubai and Bahrain, generating billings in excess of £25m.