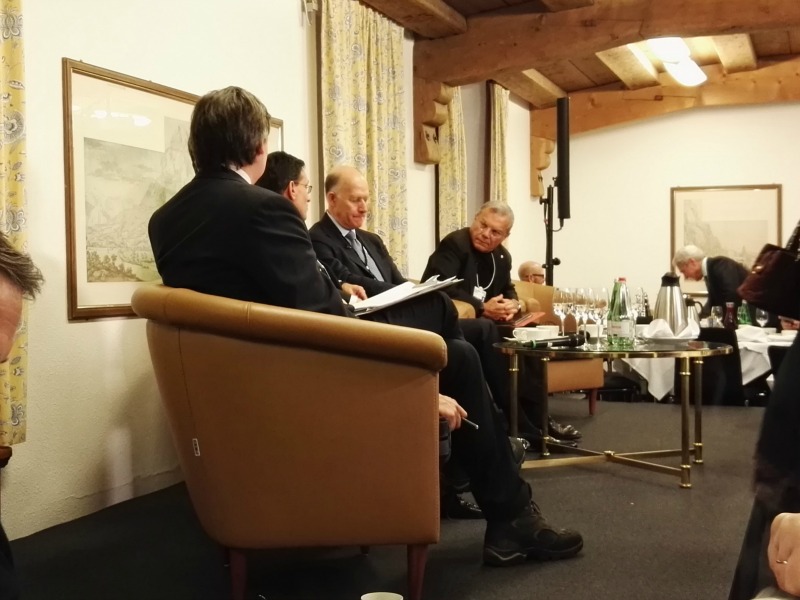 Davos Grapples With The Trump Phenomenon

"Trump is close to creating the biggest brand in the world," says WPP's Sir Martin Sorrell at a discussion of the looming US election.

At Davos, much of the political discussion concerns someone that isn't attending — Donald Trump, whose populist presidential campaign has sent jitters through the business and political leaders attending the World Economic Forum.

Trump, and the people that his campaign represents, turned out to be a major focus of a Bloomberg/WPP panel discussion this morning, which asked how the US election would affect the world economy and international relations.

Sir Martin Sorrell thinks that Davos' "rarefied atmosphere' should not distract from the way that disaffected people have thrown their weight behind Trump, and other populist politicians such as Marine Le Pen and Nigel Farage. Indeed, the WPP CEO believes Trump is close to creating the biggest brand in the world.

"We shouldn’t be surprised by populist candidates and extremist candidates, given what we went through in 2008 and the supposed hollowing out of the middle class — you’ve seen recession, relatively high levels of unemployment, severe economic distress," said Sorrell.  "Trump is close to creating the biggest brand in the world."

Much of that, said the panel, is down to the way the media has treated Trump, with Burson-Marsteller global CEO Don Baer noting that "no one has touched him on his real business practices and failures."

"The media have made Donald Trump’s campaign," said Baer. "It’s why he doesn’t have to spend any money on advertising; it’s unprecedented."

Trump's efforts to "play to the emotion of fear", as Ernst & Young's Beth Brooke-Marciniak put it, are a long way from the search for consensus that typifies debates in Davos. "People fundamentally think the game is rigged against them," she said, echoing the argument made my Oxfam's Winnie Byanyima yesterday.

That disaffection, said Baer, is "dangerous."  "They think that the elites are taking all of the gains," he said, a stance that has effectively undermined any attempt to have "a conversation about how we renew and restore growth in America."

Trump's appeal is also propelled by his apparent authenticity. "This search for a tell-it-like-it-is phenomenon," said Bloomberg editor-in-chief John Micklethwait. "The backlash against political correctness is very widespread."

Yet most of the the panellists do not seriously believe that Trump will prevail, pointing to polling trends and his geographic support. "I think Trump will fade once we get to real politics, rather than the brand building that we’ve seen," said Harvard historian and author Niall Ferguson. "He’s very popular with people who are highly unlikely to vote. My feeling is this will be gone in the spring."

"Those polls can’t all be wrong," cautioned Sorrell. "They are saying something about the frustration and the impact of what’s happened in the last five years."

"The media has projected the brand," added Baer. "Whether or not it translates into votes we’ll see very soon. But it’s been an amazingly supine experience."