Please refer to our Privacy Policy for important information on the use of cookies. By continuing to use this website, you agree to this.
Home Latest Dick Martin Calls On Industry To Unite For Media Literacy At Page Dinner 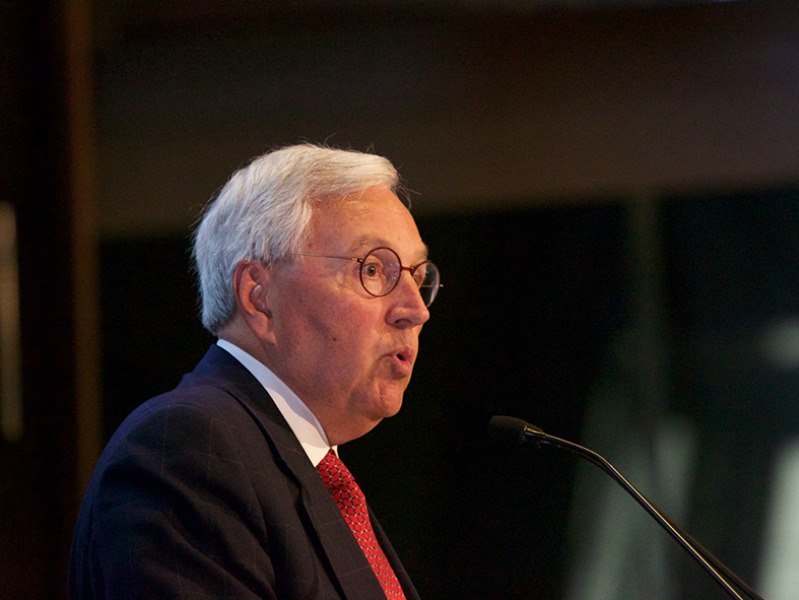 NEW YORK—“Public communications is at a dangerous tipping point,” former AT&T communications chief Dick Martin told an audience of industry luminaries at the Arthur W. Page Center awards dinner last week, calling on the industry to address “fake news” and the crisis of confidence in the mainstream media.

“Truth is no longer determined by conformity to proven facts but by how well it meshes with pre-existing feelings,” said Martin in a speech accepting the Larry Foster Award for Integrity in Public Communications. “Fact-checking is attacked as whining and nit-picking and ultimately reinforces the very attitudes on which fake news feeds.”

Martin pointed to research showing that two-thirds of US adults don’t believe the news they see, hear, or read and to attacks by the president, who recently characterized reporters as “the most dishonest people in the world” and calls some of our leading news organizations “enemies of the American people.”

“We in public relations may have other ways to reach stakeholders, but if the credibility of the media is undermined, we all lose,” he told attendees. “Fake news may be aimed at political opponents today, but tomorrow it could just as easily target companies, brands, and civil society, poisoning the markets in which we compete.”

He suggested that industry has a major stake in raising media literacy and helping people develop critical thinking skills.

“For starters, we shouldn’t create or enable fake news in a misguided attempt to attract attention, as one entertainment company recently did. Nor should we hide behind phony groups and campaigns, as too many of us still do. That may help limit the supply side of fake news.

“But public relations has a role in addressing the demand side also. Understanding human decision-making and behavior is in our wheelhouse. Few industries are better equipped to share that understanding with consumers in a way that makes them more sensitive to cognitive illusions like confirmation bias, tribalism, and implicit prejudice.”

Martin suggested that the time has come for the PR industry to develop its own equivalent of the Ad Council to help professionals address social issues in a collective manner.

“Individual PR agencies and client organizations devote hours to pro bono work on behalf of many causes,” he said. “But we should be organized in a network of PR agencies and clients with a common strategy to address a cause at the heart of what we’re about—teaching people how to be savvy media consumers.

“We can use our skills to teach people how to fact-check emails, Tweets, and Facebook postings. How to respond to racist, homophobic, or hateful email and social media posts. How pictures and statistics can lie. We can teach them how to fight the spread of hateful propaganda, whether from a neo-Nazi in his parent’s basement or a member of ISIS on a laptop in Syria. And how to disagree without being disagreeable.”

At the same event, former Dayton Hudson communications chief Ann Barkelew was recognized with the Page Center Integrity Award, and used her acceptance speech to focus on similar issues—and the importance of integrity in public relations.

“Today there is such a loss of civility,” she told the audience. “Everyone is so quick to criticize, skeptical of everything, reluctant to trust. They don’t know who or what to believe. We can help. We know how to build trust. How to create a better environment where truth and trust can flourish?”

She said that high school journalism teachers are now teaching students how to recognize fake news and pointed to stories that the California legislature is now considering making media literacy a requirement in all junior and high schools.

“I worked for a really excellent CEO…who expected me to always look straight at the facts and recommend a course,” she said. “I memorized the Page Society Principles, which I could quote with the least provocation: Tell the truth; prove it with action; listen to the customer; manage for tomorrow; conduct public relations as if the entire company depended on it; true character expressed by our people; remain calm, patient and good-humored.

“We must be the someones people turn to for information they can trust, for the truth, for ethical behavior.”