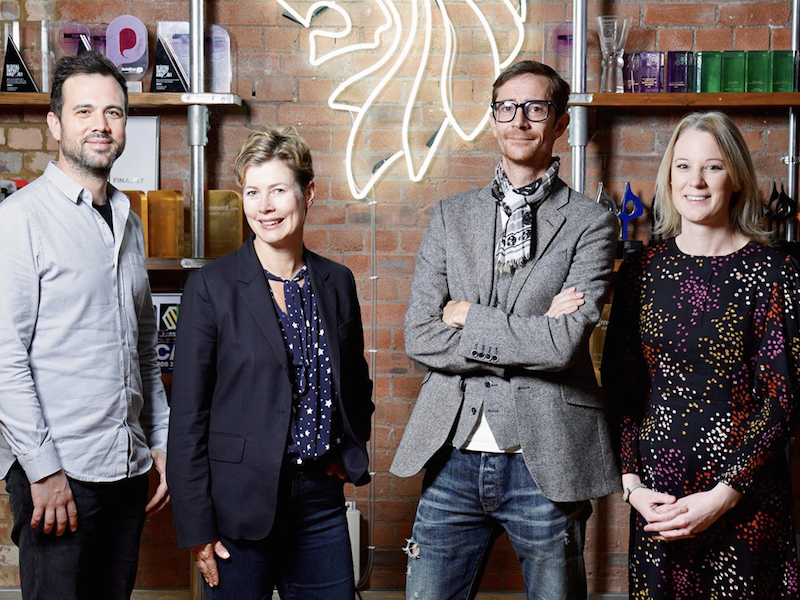 LONDON — Hope&Glory PR has restructured its senior leadership team, with founders James Gordon-Macintosh (pictured, second right) and Jo Carr (second left) taking on the roles of chief creative officer and chief client officer respectively, and directors Anna Terrell (right) and Seb Dilleyston (left) moving up into newly-created joint-MD posts. The eight-year-old consumer agency, which now has a team of nearly 80, has made the changes to help manage its expansion and ensure the co-founders can focus on client work and creative output.

LONDON — The Public Relations and Communications Association (PRCA) has elected Rachel Friend, Weber Shandwick’s UK & Ireland CEO, as its 2020-2022 chairman. Friend will succeed Jim Donaldson when his term as chairman ends in autumn 2020. She said: “We are living through a period of unprecedented change; politics, sustainability, diversity, technology. Our industry must continue to evolve at a rapid pace to engage audiences.  I’m very much looking forward to working with the PRCA to fuel the change.”

LONDON — Tech and healthcare specialist PAN Communications has hired Sian Kilgour as director of client services in its UK office. Kilgour joins from Cirkle, where she was a senior director, and will report into UK MD Gareth Thomas and vice president and general manager Nia Evans. The appointment follows PAN Communications’ move into the UK market, with the acquisition of Capella PR in July.

BERLIN — BCW Germany has combined its crisis, issues and public affairs offerings into a new issues and public affairs practice. The practice will be led by Frank Schönrock, who joins the firm as managing director from Grayling, where he was Germany CEO and European crisis management chair. Schönrock reports to BCW CEO and market lead Wolfgang Lünenbürger-Reidenbach, and becomes part of the German management team.

LONDON — Broadcaster UKTV has appointed Simon Michaelides to the newly-created role of chief marketing and innovation officer, following the departure of chief marketing and communications officer Zoe Clapp after 15 years. Michaelides will lead the marketing, consumer communications, social and online, media, creative and innovation teams. He was previously chief transformation officer at UKTV and BBC Studios UK, where he led integration and development of the combined UKTV and BBC Studios business after the BBC’s acquisition of most of UKTV’s channels.

LONDON — Iris has appointed Ginny Paton as managing partner. She joins from Mischief, where she was a director, overseeing accounts including Vodafone, E.ON, Odeon and Honda. Paton, who was the founder of House PR, will report into managing director Chris Marlow and joins the London leadership team as head of the agency’s PR specialism. Iris’ PR clients include Brita, Barclays, Haven and Suzuki. Paton will take over from Vicky Harding, who is on maternity leave.

DUBAI — Four Communications Group has won the large agency of the year award at the 11th Middle East Public Relations Association (MEPRA) awards. Brazen was named as small agency of the year. The small in-house team of the year award went to Standard Chartered Bank, and large in-house team of the year was awarded to Mubadala Investment Group. Hill+Knowlton Strategies took home the most awards, with 19 wins. The 2019 Chairman’s award went to Bashar AlKadhi, CEO of Hill+Knowlton Strategies METIA, for his outstanding contribution to the industry.

LONDON — Low-cost coach operator Megabus, part of the Stagecoach Group, has hired Tin Man for its first PR campaign to help make it a travel choice for students. The pitch was non-competitive, following the work the agency has been doing for sister company East Midlands Trains. Tin Man has created the ‘Sweetheart Saver’ a new ticket offering free travel for couples between two of the 90 destinations on the network for a year, featuring a real-life long-distance couple in the campaign film. If the trial is successful, the ticket will be rolled out nationwide.

LONDON — Creativebrief’s managing director Charlie Carpenter, who has been with the firm since launch, has been promoted to CEO. The pitch consultancy’s hires in the last 12 months have included The Brooklyn Brothers’ Stephanie Nattu joining as business director and the Telegraph’s Elaine Westbury taking the reins of marketing director. Creativebrief’s corporate clients include Starbucks, Britvic, Uber, Guinness and PlayStation.

LONDON — Unity has won a competitive pitch to work with third sector organisation Red January, whose aim is to motivate the UK to get active every day during January to support their mental health and establish healthy habits. The agency’s brief is to raise awareness and inspire the Red community, with a focus on influencer engagement and media relations.