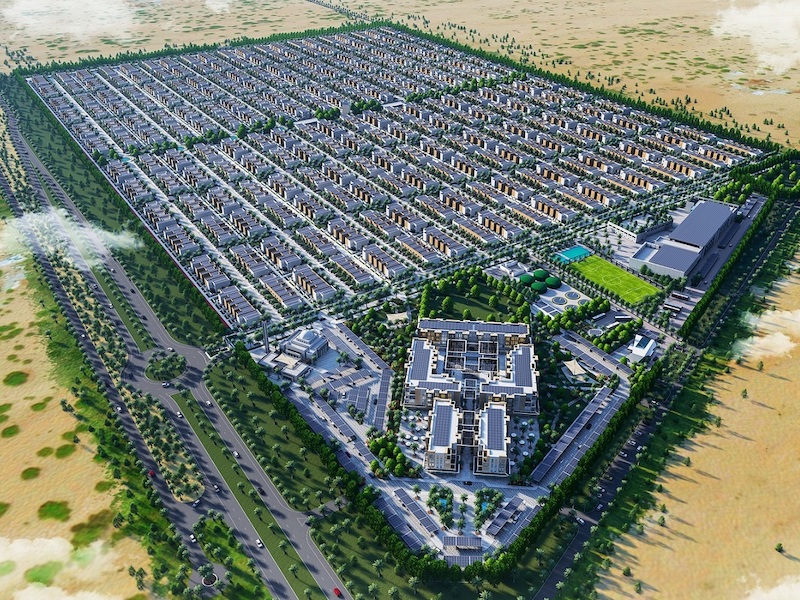 LONDON — Tesco’s UK and Ireland communications director, David Page, is leaving the supermarket chain after three years. He joined Tesco from Monarch Airlines, where he was group head of communications, and was previously a director at Freuds and BCW. His next move is not yet known.

DUBAI — Gambit Communications has been appointed by Sharjah Sustainable City, the “fully-integrated residential sustainable city” as its PR agency. The €45m project (pictured) aims to create a net zero energy community offering a unique and sustainable lifestyle on a plot of 7.2 million square feet of land and is a joint venture between Sharjah Investment and Development Authority (Shurooq) and Diamond Developers.

LONDON — Global intelligence and cyber security consultancy S-RM has appointed Milk & Honey PR as its PR agency of record after a competitive pitch. The brief is to raise awareness of the brand and its services in the UK, US and APAC. The agency, which specialises in managing and nurturing reputations for ambitious growth companies, will manage all S-RM's PR activities, reinforcing the company’s position as a provider of intelligence and cyber security services, helping organisations solve complex problems. The team will be led by associate partner Jessica Ballinger.

LONDON — Global fintech QNTMPAY has appointed brand building, communications and analytics agency Boldspace on a wide-ranging brief spanning strategy, creative, PR, and social after a competitive pitch. The agency will create campaigns to build awareness of the business as it seeks to grow its waitlist and then launch in the US, followed by the UK this summer.

DUBAI — Kekst CNC has strengthened its Middle East business with the appointment of Scott Melrose as director. He joins from NEOM, the $500 billion Saudi Arabia project, and previously held a senior role in the Expo 2020 Dubai press office. He was also a director at Finsbury Glover Hering.

LONDON — Kindred has been appointed by the Organic Trade Board after competitive pitch, to help deliver continued growth within the UK’s organic sector. Kindred’s remit includes development of an Organic September campaign across paid, owned and earned channels to demonstrate the link between choosing organic and helping to protect the environment.

LONDON — APCO Worldwide has formed a partnership with IntoUniversity, which helps young people from disadvantaged backgrounds to reach their potential. The agency will provide pro bono public relations support to the organisation, as well as coaching and mentoring students, running workshops for students to increase their employability, and highlight the opportunities of a career in PR.

STOCKHOLM — Accolade Wines has hired Manifest Group as the global communications agency for its Banrock Station wine brand. The agency will work across Australia, the UK, Europe, North America and Asia, led by Manifest’s offices in Melbourne and Stockholm.

LONDON — Earned media and content agency Common Industry has hired Simon Robertson as its new strategy partner to support challenger start-up, fintech and e-commerce brands as they scale. Robertson formerly held senior roles at BBH, Wieden & Kennedy and Anomaly UK, where he was head of communications strategy. He takes a minority equity stake in the business.

LONDON – The PHA Group has made two new hires in its technology division after winning a number of new B2B clients this year across fintech, SaaS, data science, enterprise tech, HR tech and adtech. Rhys Merrett joins as an account director from City Road Communications and will also lead integration with PHA’s corporate division. Sarah Redman joins as an account manager after five years at GingerMay.

LONDON — Luxury global marketing agency Issa PR has been appointed to launch New York-based visual artist and creative director Jonathan Rosen’s collaboration with art exhibition space W1 Curates this month and his first non-fungible token (NFT) show on The Nasdaq, Times Square in June. The agency will be handling the launch, including global strategy, media relations and media partnerships in the UK and the US.

HAMPSHIRE, UK — To celebrate World Environment Day on 5 June Jargon PR has pledged to plant 5,000 trees over the next 18 months through a new partnership with carbon offsetting charity Ecologi. The agency will subscribe every client to the Ecologi carbon offsetting program, planting 12 trees per month for each. The agency aims to plant 300-400 trees every month.

PRESTON, UK — FMCG supplier OTL has appointed MTJ PR to develop B2B and B2C communications strategies for its “fun and affordable” cleaning brand, Spunj. The agency’s brief is to drive brand awareness for the Spunj cleaning pad and cloth range to trade and consumer audiences through a press office, seasonal activity and new product campaigns.