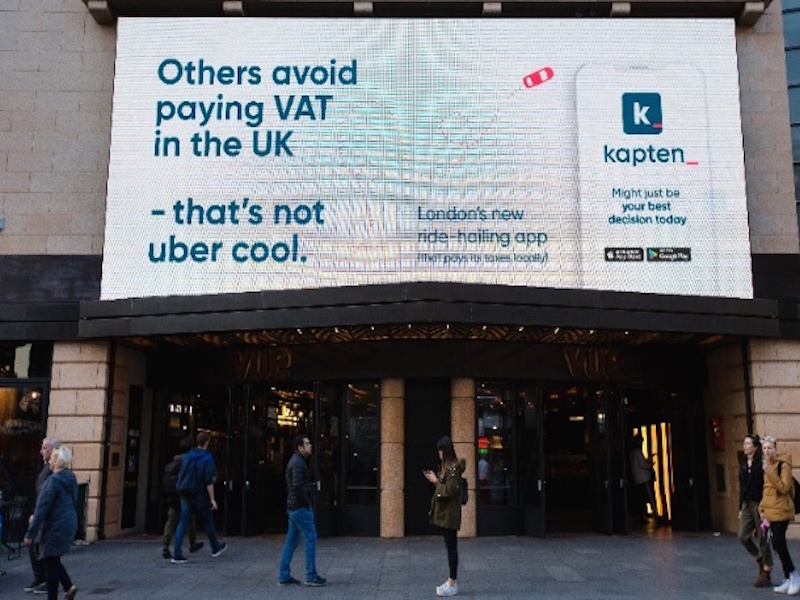 LONDON — Uber rival Kapten has appointed Taylor Herring to handle its UK launch, as the European private hire vehicle service expands to London with approval from Transport for London. The agency’s launch campaign (pictured) takes a swipe at Uber by calling the company out for avoiding local taxes.

DUBLIN — Blockchain and emerging technology specialist communications agency Wachsman has appointed Jane Fields as MD, Europe, Middle East, Africa (EMEA). Fields was previously Skype’s chief communications officer; she has also served on the board of United Business Media and was the first female general manager of Edelman's PR operations in the Middle East.

DUBAI — Toh has been appointed as the retained Middle East PR agency for The House of Garrard, the world’s oldest jeweller, after a competitive pitch. The brief covers PR and influencer management across the region. Headquartered in London, Garrard has 32 points of sale worldwide with presence across UAE, Saudi Arabia and Bahrain.

LONDON — CereProc, an Edinburgh-based text-to-speech company that creates digital voices, has engaged Firefly Communications UK as its PR agency. CereProc has forty-five digital voices for any platform, with various accents. It has also “cloned” the voices of people suffering from voice loss or degradation, such as those with thyroid cancer and motor neurone disease, helping them retain the power of speech. The PR programme will focus on UK media relations, social campaigns and awards.

LONDON — Milk & Honey PR has bolstered its leadership team with the appointment of two new board members. Client directors Caroline Addy and Jessica Ballinger will work alongside managing partner Kirsty Leighton to continue to grow the two-year-old business, which now has a team of 14.

LONDON — 2K Games has appointed PR, social and influencer agency Fever to launch its upcoming first-person shooter title, Borderlands 3. Fever will work with 2K’s in-house communications and marketing teams to target gaming, consumer and lifestyle media and influencers. Having kicked off in April with the first teaser trailer for the game, the campaign will run through to retail launch in September. Fever will also engage gaming and consumer audiences by developing brand partnerships, live events for media, influencers and consumers, and cosplay activations.

DURHAM, UK — Durham University has appointed former PR agency staffer Paul Drury-Bradey as its “entrepreneur in residence.” Drury-Bradey has worked at London agencies including Unity, Premier and Idea Generation. In his new role he will work with academic staff, postgraduate students, and professional support services on creative approaches to research.

LONDON — Pitch consultancy Win That Pitch has introduced a number of initiatives to give clients a full global service, including access to senior associates across the business, charity, consumer lifestyle, government and agency sectors, design support, CPD-approved pitch and presentation workshops. It has also formed partnerships with research specialist ICG, and an AI specialist to enable agencies to use AI for research and analysis during the pitch process.

LONDON — Bubble Agency, the PR, marketing and events specialist for the media and entertainment technology and services sectors, has moved back to central London after five years at Pinewood Studios. As it eyes further growth, the agency has also bolstered its junior team with three new appointments: Steven de Waal, Amisa Saari-Stout and Tiffany Hutt.