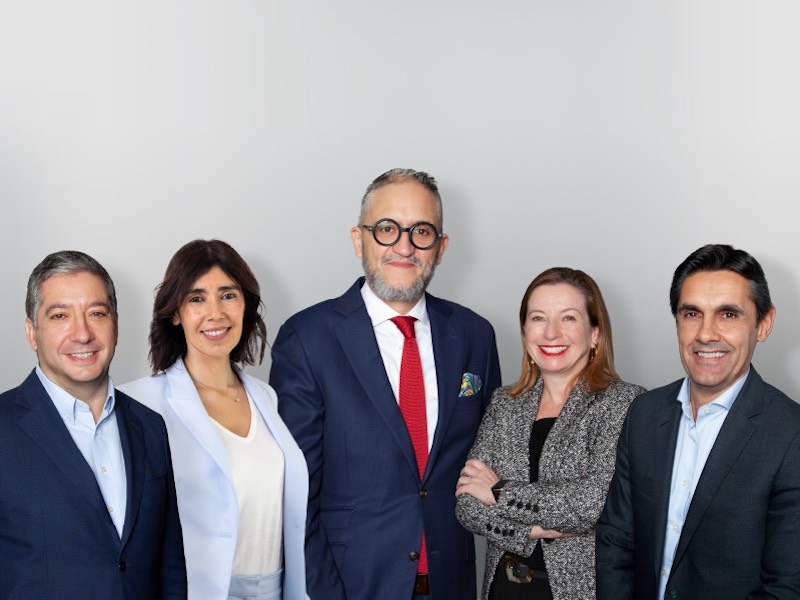 MADRID — LLYC has bolstered its leadership team, promoting Luisa García (pictured, second right) to the newly-created position of chief operating officer, and naming Luis Miguel Peña (left), previously global talent officer and head of the Andean region, as the firm’s new CEO for Europe. Both will report to global CEO Alejandro Romero (centre). García has been a partner since 2007 and European CEO for the past four years, during which the firm almost doubled its turnover in Spain and Portugal. Before that, she was LLYC’s COO in Latin America. At the same time, Tiago Vidal (right) becomes global talent officer and head of the technology division, and Marlene Gaspar (second left) is promoted to managing director of the Lisbon office, after leading the consumer engagement and digital units in Portugal.

DUBAI — Edelman Smithfield, Edelman’s specialist financial communications arm, has appointed capital markets specialist Dhanya Issac to head its Dubai operation. Issac has worked for agencies in Dubai specialising in banking and finance communications and special situations, including leading Anghami’s SPAC listing on Nasdaq New York and the reverse listing of SHUAA on the Dubai Financial Market. She also spearheaded integrated campaigns for Visa in the GCC and North Africa regions. Edelman Smithfield Middle East, which was set up less than two years ago, works with global and regional banks, sovereign wealth funds, private equity, crypto firms, fintechs, a stock exchange, a central bank and an international financial centre. The practice is planning to invest further in specialist talent across investor relations, M&A, ESG, restructuring and special situations across its three offices in Abu Dhabi, Dubai and Riyadh.

LONDON — B2B technology specialist Fox Agency has hired Lottie West to lead its PR department, as part of plans to grow its PR offering and integrated services. West was most recently at Hotwire, where she spent three years as associate director working on UK, EMEA, and global campaigns across B2B and B2C tech for the likes of Trellix, McAfee, ASUS, Vrbo and OkCupid. Before Hotwire, West held agency leadership roles in the PR division of TBWA\Auckland, as well as at Phipps in London. In her new role, she will support global PR campaigns for clients including Alcatel-Lucent Enterprise, Sony, Delphi Technologies, Arcwide and more.

ABU DHABI — Brunswick Group has appointed Rebecca Jarvest as a partner in its Abu Dhabi office. Most recently, Jarvest was director of communications and strategic partnerships at the Abu Dhabi Government Media Office, where her work included spearheading the national vaccination campaign, launching Abu Dhabi’s first multi-stakeholder, global foreign direct investment campaign and advising on participation at global events including Davos and COP26. Before that, Jarvest was head of PR for Special Olympics World Games Abu Dhabi in 2019 and a director at communications agency TRACCS, where she was responsible for generating new business and running client teams in the travel and tourism, arts and culture, retail and technology sectors.

LONDON — Alex Perry and Daniel Roberts have joined The Romans from Havas-owned One Green Bean, as client services director and creative director respectively. Perry started his career at Burson-Marsteller, where he worked with The Romans’ CEO Joe Mackay-Sinclair in its consumer division. He also worked at 3 Monkeys Zeno as a director and as head of PR at One Green Bean. Roberts joined One Green Bean as creative director in 2019 and in his new role will work with Mackay-Sinclair on further international expansion, after the agency launched operations in Dubai and New York last year. Both Perry and Roberts report to partner Lucy McGettigan.

LONDON — Independent communications agency Cognito has appointed Cherish Anison to the newly-created role of global head of people and talent. Anison joins after three years at consumer insights agency GWI, latterly as people lead for Europe. Before that, she worked as a HR business partner for GSMA. In her new role, Anison will work with Cognito’s global leadership team across seven offices as it pursues its growth plans. The agency’s client base is made up of finance, technology and professional services firms around the world.

LONDON — The Flywheelers, the integrated communications agency for high-growth technology start-ups and scale-ups, has appointed Samantha McKittrick as associate director. McKittrick has more than 10 years’ experience in integrated B2B communications and digital and corporate storytelling, from supporting start-ups breaking into the UK market, through to conceiving and delivering integrated campaigns for scale-ups and global organisations, working with clients including Canon EMEA, Autodesk and London North Eastern Railway (LNER). She joins The Flywheelers from Nelson Bostock and also worked at Brands2Life for eight years.

LONDON — Social and environmental impact consultancy Skating Panda has hired Janek Seevaratnam as strategy director, joining the senior management team. Seevaratnam has worked in social impact and sustainability consultancy for 10 years, for clients ranging from corporate foundations and B Corps to multinational companies and household brands, including leading the social impact and sustainability consultancy for corporate clients at Charities Aid Foundation.