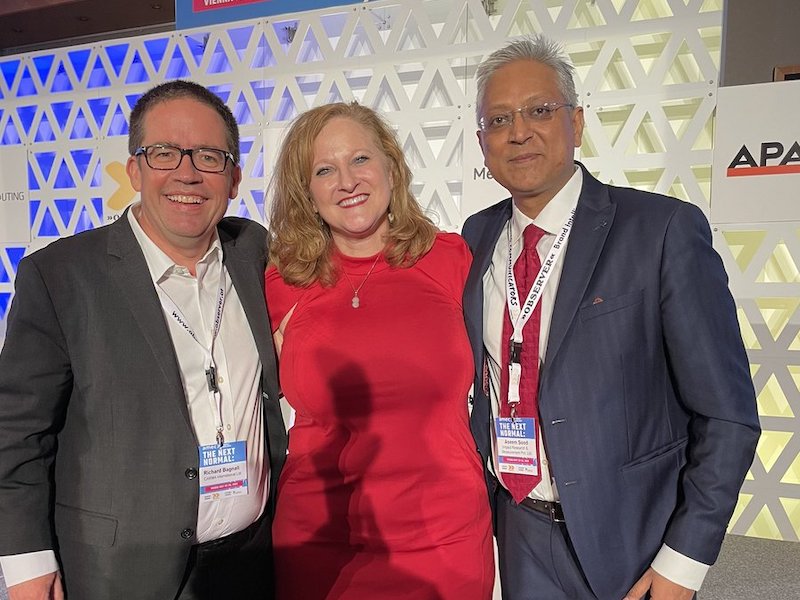 VIENNA — The International Association for the Measurement and Evaluation of Communication (AMEC) has announced its new chair as Aseem Sood, the CEO of Impact Research & Measurement. Sood (pictured, right) will take over the position for a two-year term, working with global MD Johna Burke (centre). He succeeds Carma global managing partner Richard Bagnall (left), who has served in the role for the past six years. The handover took place at the AMEC Global Summit 2022 in Vienna last week.

LONDON — W Communications has promoted Jack Beckett to creative services director, overseeing experiential activities and campaigns, as the agency responds to increased demand for live activations. Beckett joined W Communications over a year ago from Outside Agency, which he founded and ran for 10 years, working with clients including Nike, Adidas and Diageo.

LONDON — Don’t Cry Wolf has hired Olly Mitchell as director of design and brand. Mitchell will be focused on growing and nurturing the design studio within the agency, while leading on branding projects and offering creative support to the wider team.

LONDON — Team Lewis has made three senior hires, under the leadership of UK managing director Sarah Ogden. Isabel Forbes joins as head of people from Dennis Publishing and brings 16 years of international HR and workplace culture experience, including at Publicis and Bauer. James Corlett joins to lead the UK go-to-market (GTM) team as a director from Ogilvy, where he oversaw the Vodafone business account as business director for five years. Niki Wheeler joins from Edelman and brings two decades of leading integrated media relations and purpose focused programmes for clients such as eBay, Vision Express and The Mission Possible Partnership. As part of its expansion plans, Team Lewis is also welcoming a new intake to its Rise Academy, designed to attract and nurture candidates from diverse backgrounds.

LONDON — Financial services communications and marketing specialist Cognito has made two executive leadership promotions. Sebastian Mathews will add EVP of global operations to his role as

LONDON — Financial services communications and marketing specialist Cognito has made two executive leadership promotions. Sebastian Mathews will add EVP of global operations to his role as EMEA MD and will will be responsible for developing Cognito’s operational performance globally. The agency has also promoted Yvonne Maher to London MD, to oversee operational, strategic and growth strategies.

LONDON — Siren Communications has appointed Lorraine Bryant to the newly-created role of client director, travel and tourism. Bryant spent 11 years with Carnival UK, where she was part of the PR team for P&O Cruises, Cunard and Princess Cruises and was responsible for overseeing Princess Cruises’ involvement in ITV documentary series The Cruise. She joins Siren from Briscoe PR, where she was a director.

JEDDAH — The International Public Relations Network (IPRN) has announced Abdulrahman Inayat, co-founder of Saudi marketing communications agency W7Worldwide, as regional chair of its board for the Middle East and North Africa region. The IPRN has more than 50 independent public relations and communications agency members in 40 countries.