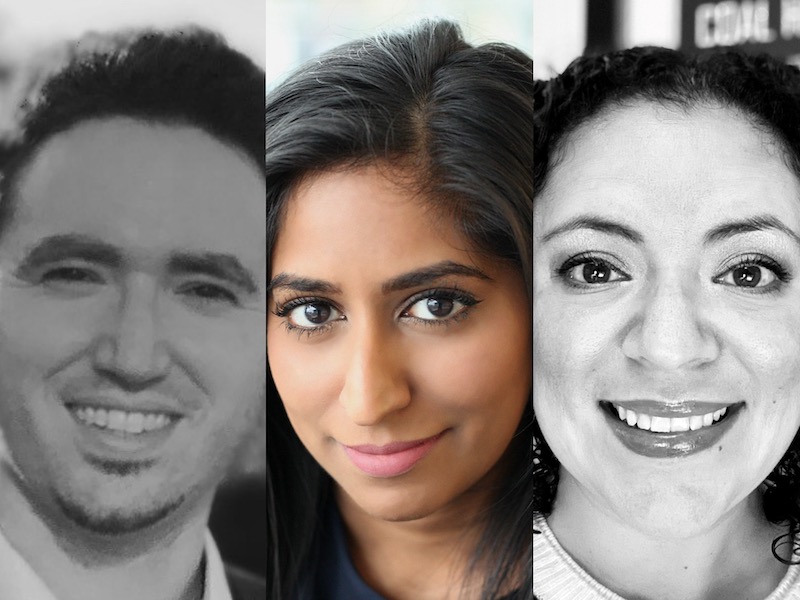 LONDON — Edelman has made several new hires in its UK technology practice. David Whitehead (pictured, left) has joined as senior director to provide senior B2B tech and executive digital communications counsel to a number of Edelman’s world leading technology clients including HP. He joins from AxiCom, where he was VP and global client service lead, and has also worked at Golin, Portland and Teneo. Whitehead is joined by Angie Ayala-Oksanen (centre) as a senior director to lead Edelman’s Samsung Mobile brief in EMEA out of London. She joins from Edelman’s Bay Area where she was SVP of its consumer technology group. The 45-strong technology practice led by MD Gerry Wisniewski has also hired Elvina Soogun (right), previously deputy head of fintech at CCgroup as associate director and Alex Dibb from OrangeDoor as senior account manager.

LONDON — Grayling has appointed Sara Beirne as head of digital. Beirne will work alongside Grayling’s data analysis, planning and creative team Ignite to drive digital growth, expertise and innovation across the network. Beirne joins from Eulogy, where she was head of media, insights and planning and led the American Express account. Before Eulogy, Beirne led consumer digital engagement across the global P&G portfolio at MSL.

LONDON — Integrated strategic communications and public affairs consultancy, Fourtold has appointed Adam Kaznowski as managing consultant. Kaznowski joins from the European Commission and European External Action Service, where he was press and media officer for foreign affairs and security policy. During his six years spent at the EC, he specialised in the EU’s relations with its European neighbourhood, with Asia and the Pacific, and North America. He also worked with European Commission presidents and high representatives for foreign affairs and security policy.

LONDON — Digital advertising platform WeAre8 has appointed Jill Cooper as its chief marketing officer. Bringing over 20 years of experience in telecoms with brands including Vodaphone, Orange and Huawei, Cooper will be overseeing global marketing to drive user and brand growth to the WeAre8 platform. She joins from mobile communications body GSMA, where she was global marketing and PR director. Cooper will also be responsible for managing key growth partnerships, such as with BT/EE. For every £1 spent by brands on its platform, WeAre8 diverts 65p to consumer and ethical causes.


LONDON — The PRCA has appointed BECG director Verity Barr as chair of its Built Environment Group. The group focuses on communications for areas including residential and commercial property, infrastructure, prop-tech, healthcare and education facilities, waste management and recycling.