Please refer to our Privacy Policy for important information on the use of cookies. By continuing to use this website, you agree to this.
Home Latest Fanclub PR & musicMagpie Take Platinum At EMEA SABRE Ceremony 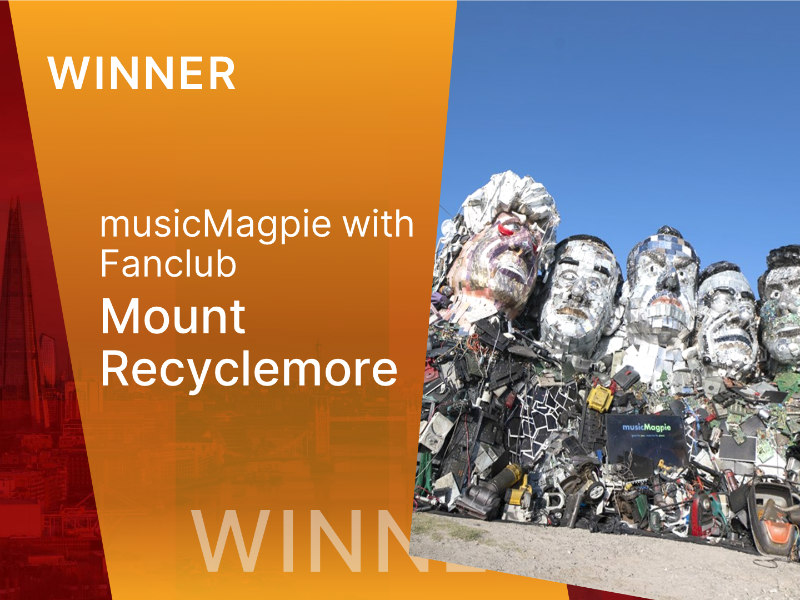 Overall, it was a good night for UK-based Hope & Glory, which took home six Gold and Diamond SABRE Awards, ahead of multinational agencies Hill+Knowlton Strategies and MSL

LONDON — UK creative boutique Fanclub PR and its client musicMagpie took home top honors in the EMEA SABRE Awards competition, besting more than 1,800 other entries to receive the Platinum SABRE Award for Best in Show at our annual dinner, which returned in person to London’s Guildhall for the first time in three years.

The campaign for the re-commerce company focused on the 53 million tons of e-waste generated each year and found a creative way to visualize the problem, in conjunction with the G7 meeting in Cornwall, creating a replica of America’s famous Mount Rushmore monument created entirely out of e-waste.

“What the judges saw was a classic earned media idea — bold and creative and impactful — that drew attention to a very real, under-appreciated problem, and ultimately attracted the attention of large swathes of the UK population,” says Paul Holmes, chair of the SABRE judges. “As a result, more than 38% of all trade-ins at musicMagpie over the ensuing month were first-time users of the service, a massive boost for the business.”

“Every one of those five campaigns received at least one first place vote from our panel of 12 client-side judges,” said Holmes. “On a different day, any one of them could have taken home top honors. But in the end it was ‘Mount Recyclemore’ that towered above the competition.”

Overall, it was a good night for another UK-based creative shop, Hope & Glory, which took home six Gold and Diamond SABRE Awards, ahead of multinational agencies Hill+Knowlton Strategies and MSL (with five each); Edelman, Ogilvy and Weber Shandwick (four apiece); and Golin and Norwegian firm Trigger (three).

A complete list of the evening’s winners can be found here.