Please refer to our Privacy Policy for important information on the use of cookies. By continuing to use this website, you agree to this.
Home Latest FWV Through A Looking-Glass: 25 Years of Pushing Boundaries 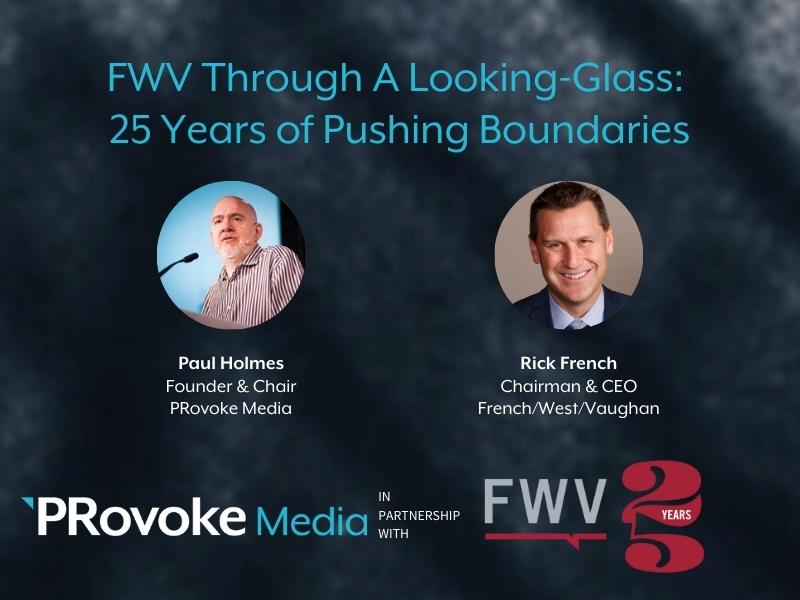 FWV Through A Looking-Glass: 25 Years of Pushing Boundaries

Paul Holmes talks with Rick French, founder and CEO at French/West/Vaughan a PR agency that was one of the first to start acquiring other small boutique Ad and PR agencies.

In this episode of the PRovoke Media Podcast, Paul Holmes talks with Rick French, founder and CEO at French West Vaughan, a PR agency that was one of the first to start acquiring other small boutique Ad and PR agencies.

French goes into detail about acquiring the advertising agency West and Vaughan to help grow his business and along with it, the broader range of options he could offer current and new clients.

The two also discuss navigating the culture clash of merging companies brought on by acquiring a firm with its own way of working. They also speak on working through those cultural differences and becoming a stronger, more unified team. French stresses the importance of having a similar philosophical identity with the principles at the firm to be acquired.

French West Vaughan produced the longstanding Wrangler Network for the iconic jean brand. French discusses how it came to fruition and how the ad campaign became a profit generator for Wrangler. He also speaks about how his work in content production has opened doors for more opportunities in TV and film.

Topics include:
0:00 Paul Holmes introduces Rick French
02:15 Origins of French West Vaughan
04:15 The old model of ad agencies working alongside PR firms
10:35 Mixing culture between PR and ad agency work
16:31 Challenges and benefits of acquiring PR firms
20:41 Advice for those looking to acquire their first licensing company
24:37 What to consider in a principle when acquiring a firm
26:47 French West Vaughan's Wrangler Network campaign
34:20 Business focus from a digital prospective