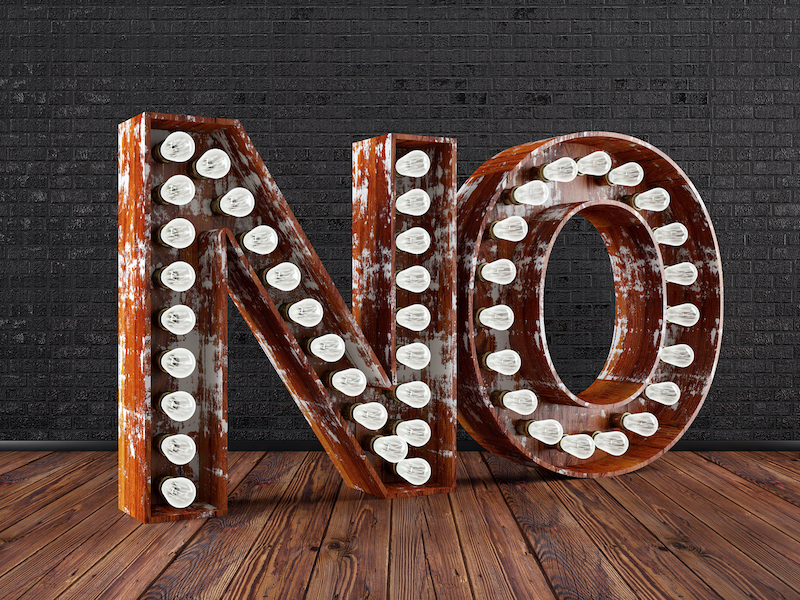 Harnessing The Power Of No

Kristin Flor Perret, WE Communications’ SVP global marketing, on why saying no creates space to do our best work.

Sometimes when I look back on the time before, it feels like someone else’s life, not mine.

Two years ago, I was racing through the glittering French Riviera, packed in a tent with a zillion industry movers and shakers in a meeting room at the Cannes Lions Festival of Creativity. Apple’s vice president of marketing communications, Tor Myhren, gave a presentation I will never forget. In it he said the most powerful word in his arsenal is “no”. He explained that “no” has a ricochet effect and fuels the octane and power of yes. Because when you do say “yes” to take on a project, task, job or encounter, it means you have the space and ability to deliver your best.

Apple calls this superpower “radical candor.” It was a nice, compelling idea, but as someone who doesn’t work at Apple, it wasn’t my reality. How would I even begin to use this in my own world?

Flash forward to today. We have been in one room doing everything and at the same time doing nothing. No dinner reservations, no gym workouts and no rush hour race to pick up at daycare. Many of us are finding ourselves at a new precipice. For some, it might be daunting and feel too early to go back out in the world. As an extrovert married to an introvert, I get this. But it is a turning point.

A turning point that contains an incredible opportunity: we get to choose how we live going forward. For me, I’m embracing the power of saying no, so I can tap into my most meaningful superpowers and fullest potential, instead of saying yes to everything that renders me spread thin and often burned out. Here are four things to remember as you experiment with saying no.

Yes is not the only acceptable answer.

Let’s face it. We live in a “yes” culture. We must always respond. Quick twitch, reactive, nimble and agile have become our norm and the expectation. But with some perspective, many of us are realizing that when we do everything as if our hair is on fire, we’re not showing up the best way we can.

I realized that saying yes to everything while the world was falling apart meant that I was beginning to fall apart. I was mentally exhausted. At times I felt guilty. Why was I so tired when I wasn’t going anywhere? As a woman and a mother with a mixed-race family I knew that if I was going to show up for what I believe in, I had to accept that I couldn’t do it all.

Saying no, I had to realize, is not a final destination. No can also mean: “not right now; give me time so I can respond and act more thoughtfully.”

I was in awe when I saw 23-year-old tennis star Naomi Osaka skip the traditional press conference after the French Open to protect her mental health. It was a reminder to all of us: We are important. When meditation app Calm stepped up and offered to pay for Osaka’s $15,000 fine (donating to a charity, per her wish), the world saw firsthand where Calm’s values lie, and most importantly, that their walk matched their talk.

Here in the US, we are still learning that saying no is extremely powerful, and that it can usher in the opportunity for transformative positive change. Case in point: systemic inequality. When George Floyd was murdered, we were forced to stare social injustice in the face and say “no, I’m not going to stand for this any more”. The momentum behind the #metoo movement was driven by the collective power of women and their allies saying no. There was a declaration: this behavior and imbalance is no longer acceptable. We demand change.

Harness the power of no in our jobs and our lives.

In WE’s recent purpose research, Rethinking the Purpose and Meaning of Leadership, 89% of respondents said customer demands that brands have a positive impact on society will continue to grow. The direct, positive business impact of saying no is hard to tabulate, but we know that when done the right way, it reinforces brand loyalty.

Bumble recently closed its offices for a week for all staff due to office burnout. Is there a person in the world who hasn’t felt this themselves? When a brand demonstrates it intrinsically understands its customer, they are one in the same. If we don’t rest, eventually, we are no longer productive, but mere husks of our potential. Downtime refills our reserves and makes us stronger.

It is incumbent on us to set boundaries. Determine what you need to function each day, and that can be anything. It only matters if it matters to you. For me, exercise is my sacred ritual. One of the ways I’ve learned to understand how important rest and recovery is, is through my CrossFit training. Just like our minds, our muscles need rest because physically our bodies cannot continue without it.

Setting boundaries helps us show up better. And it must be a priority and ritual, same as exercise or meditation or playing with our kids and pets. These aren’t nice-to-haves once everything on your to-do list is completed. Reframe how you look at downtime: It’s mandatory to success.

No takes practice, but it’s worth it.

In a talk at the Edinburgh TV Festival in 2020, actress, producer, writer and director Michaela Cole shared how she turned down a $1 million deal with Netflix after her hit TV show Chewing Gum gained critical acclaim in the UK and piqued their interest. “Money’s nice” she said, “but I prefer transparency ... I used the only power I had and declined.” For Michaela, a shiny deal wasn’t worth her giving up her copyright to her new TV show. When you say no, it means you’re saying yes to understanding what is right for you.

Last month, a slice of Cannes came to Brighton, via PRovoke Media and ICCO’s first hybrid event, with WE Communications among the sponsors of Cannes Condensed. It was about showing up in the right way for now, featuring less rosé on rooftops, and celebrating creativity on the English Riviera instead. It still happened. Just differently. We all needed and continue to need to find new ways to feed our creative and innovative souls.

This also made me think of Tor Myhren’s keynote from 2019. How I had no idea how profound it would become in my life. No is a word that we can own. And we can use it with our clients, colleagues and family members. Imagine the amazing things we can do with more thoughtful and meaningful attention.