Please refer to our Privacy Policy for important information on the use of cookies. By continuing to use this website, you agree to this.
Home Latest Hod Lipson: AI Is Becoming More Intelligent, More Creative, More Disruptive 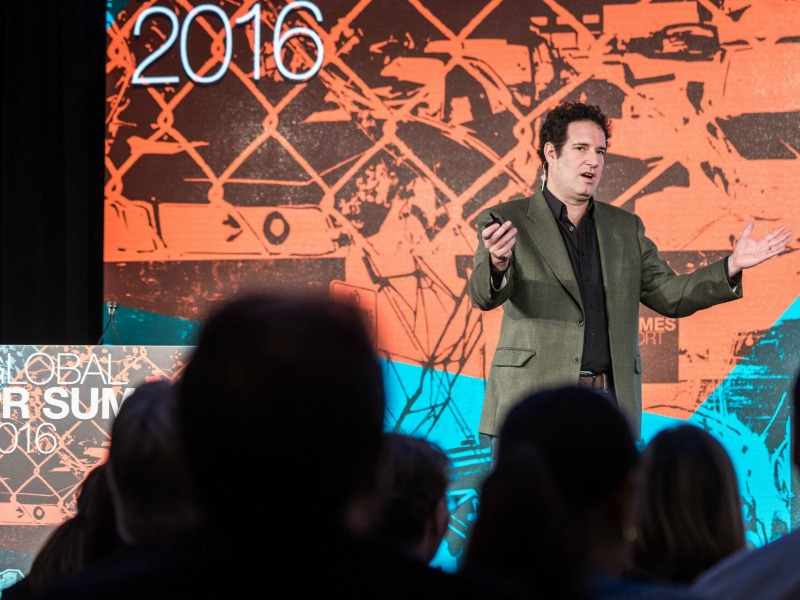 Developments in robotics and artificial intelligence are happening so fast that they have the potential to disrupt every industry—including the creative industry.

“Developments in robotics and artificial intelligence are happening so fast that it is surprising even those of us who are experts in the field,” Lipson told the audience at PRovoke16, during a session on “Artificial Creativity sponsored by Weber Shandwick. “Since 2012, investment in AI has been increasing exponentially as we see larger investments and more frequent investments in AI.”

Lipson showed the audience examples of work by robots that can write piano sympathies and paint works of art, and warned that “creativity is the next frontier” for AI.

This is a marked shift that has largely taken place over the past four years, Lipson said, taking the audience through a quick history of recent developments in AI and robotics, driven by what he called four “exponential compounding factors”: faster, cheaper, better computers; a growth in the amount of data; better algorithms for programming; and the cloud, which enables machine to learn from each other.”

Until relatively recently, AI’s role has been relatively limited. “There’s AI doing stock trading, or predicting the weather, or suggesting what link you should click on next,” Lipson said. “There is AI that can win at chess or other games where there are a finite number of possible choices. But it is difficult for a robot to move into the real world where there are many more choices in any given situation.”

He showed a video of an advanced robot playing table tennis. The robot handily beats a former world number one human player, until one of his balls hits the net and the robot is unable to react. The human figures this out and changes his game. “The Achilles heel or AI is inability to handle rare events,” Lipson said.

But there were other issues in AI: “A few years ago, no AI could do something as simple as looking at two photos and tell the difference between a man and a woman, which any human infant can do. It is hard to write a program for that.” But there were two schools of thought when it came to developing AI: one focused on programming, the other focused on learning, “showing them examples and hoping they figure it out from studying those examples.”

In 2010, experts created a database of million images and issues a challenge to people around the world to write algorithm that could categorize them correctly.

Initially, the best performing algorithms got three out of four correct. In 2012, however, the error rate dropped from 25 percent to 15 percent. “This was like seeing Jesus for the AI community. It was a group from Toronto that open sourced their solution. Next year it went down to about 5 percent, which is about the error rate for humans. By 2015 machines were outperforming humans.


One key to this kind of exponential progress is the growth in the volume of data being produced and gathered. The number of cameras and the number of digital images they produce has exploded in recent years. There are more GPS sensors, more motion sensors, all producing the kind of data that acts as fuel for AI.

This has real world implications. “The reason driverless cars are taking off now is that until now computers could not understand what is around them in their immediate environment—they can tell the difference between a child a fire hydrant between a pothole and a shadow. This is why we are now seeing driverless cars become a reality.”

But it is also helping to develop AI and robotics applications that will disrupt numerous industries. “We are building drones to fly over corn fields, which can fly over a field and examine every single plant and treat only that plant, not the entire field.” That has the potential to help farmers, who continue to suffer large losses from ailing crops, but also to alarm chemical companies that are dependent on pesticide sales and have never thought of AI as a source of competition.

Finally, growth is being further accelerated by the cloud, which connects numerous AIs together. “Machines can now learn from each other,” Lipson said. “If a driverless car has a crash, all the connected cars have that crash, and all cars learn from that crash. In this world, you can see a medical AI that has treated every possible condition in every part of the world and learned from multiple lifetimes of experience.”

And that facial recognition AI can now not only recognize the difference between a man and a woman, it can also recognize facial expressions and emotions. It can listen to a piano concerto and write its own. It can study painting and create its own artworks. It is becoming increasingly difficult to detect the difference between things created by human beings and things created by AI.

The presentation coincided with new research from Weber Shandwick suggesting that consumers around the globe are more likely to see artificial intelligence’s impact on society as positive rather than negative (45 vs. 7 percent). When it comes to their personal lives, consumers are even more likely to think it will have a positive than negative impact (52 percent vs. 7 percent).

But consumer understanding of AI is still limited. While two-thirds (66 percent) of those surveyed say that they know a lot (18 percent) or a little (48 percent) about AI, one-third (34 percent) admit knowing nothing.

“For those of us in the marketing and communications industry working at the intersection of technology and humanity, we know technology disruption brings its challenges but also opportunities to advance change,” said Gail Heimann, President of Weber Shandwick. “We now have a baseline on what the average person and marketer thinks about AI as we start to understand how it impacts the experiences between people, brands and the world around us. There could not be a better time to more clearly define AI and explain its potential.”

When it comes to the business realm, however, AI is clearly already here. Nearly seven in 10 CMOs (68 percent) report that their company is currently selling, using or planning for business in the AI era, and nearly six in 10 (58 percent) believe that within the next five years, companies will need to compete in the AI space to succeed. And 55 percent of CMOs expect AI to have a greater impact on marketing and communications than social media ever had.