Please refer to our Privacy Policy for important information on the use of cookies. By continuing to use this website, you agree to this.
Home Latest In2Summit A-P: PR Industry Must Move Beyond Vanity Metrics 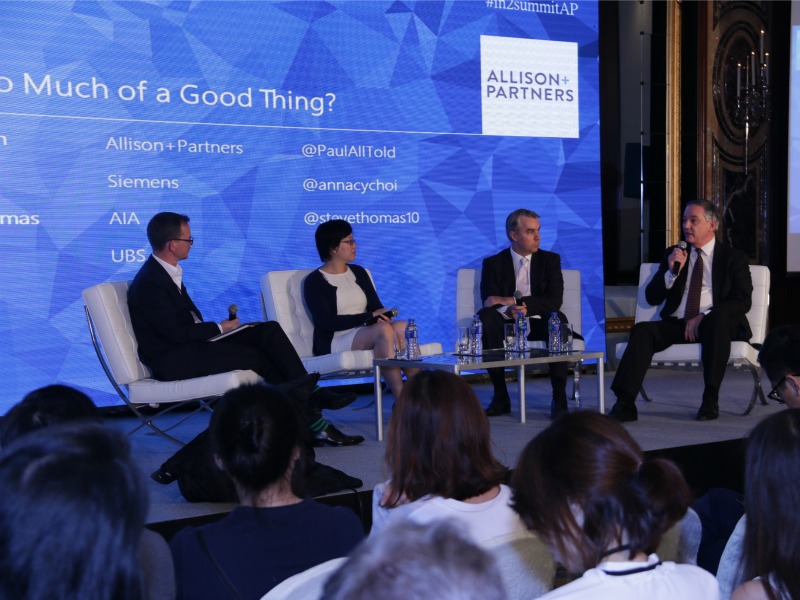 Data and analytics need to be relevant to C-suite executives, hear delegates at Asia-Pacific conference.

HONG KONG—The public relations industry needs to move beyond “vanity metrics” such as likes and followers and ensure that metrics are more relevant to C-suite executives, attendees at the Asia-Pacific In2 Innovation Summit heard today.

A panel sponsored by Edelman and focused on “The Role of Data and Analytics in Communications Marketing” emphasized the need for all PR people to understand and embrace big data, and a wide variety of other primary or secondary data source, while a subsequent session sponsored by Allison+Partners looked at “Measurement and ROI: Too Much of a Good Thing?” and discussed the need for more “left-brain” thinking without losing sight of the importance of “right brain” creativity.

On both panels there was widespread agreement that data and analytics and measurement and evaluation would be more important to success in the profession.

Andrew Ryder, the head of Edelman Digital in Asia-Pacific, insisted that in a modern agency, everyone needs recognize that data is a part of their function, an argument that was swiftly embraced by Sean Rach, chief marketing officer for Prudential Asia.

Said Rach, “There was a time when we would ‘hand it over’ to the digital team. There’s no time for that; it just can’t happen anymore. In the same way that there’s no digital media, anymore—it’s just media—we have to get everybody keyed into the idea that it’s everybody’s job. Everyone has to learn social monitoring, because it’s just part of the job today.”

Ryder also warned that the industry was over-emphasizing what he called “vanity metrics” such as likes and followers, and pointed to the recent controversy over video metrics at Facebook—apparently overstated—as an example of how things can go wrong with a focus on the wrong metrics.

According to Piotr JJ Szymanski, regional director of YouGov Asia-Pacific, “These metrics are important, no question about it, but focusing on them specifically and making important costly business decisions on these metrics alone can put you in big trouble. Followers and likes are used to find key influencers, but my question to that would be the level of trust. You would be amazed how many of the people with lots of followers have very low levels of trust.”

Szymanski pointed to recent YouGov research which found remarkably low levels of trust in some of the region’s most high-profile “influencers,” particularly celebrities.

Rach was even more adamant: “Worrying about the latest buzz figures is a good route to extinction. We have a great way to make ourselves irrelevant in the organization. You have to be able to speak their language, which is business language. We have to be a catalyst for business growth.”

One key, he said, was to discuss “investment” in digital and social media rather than “spend,” and to understand that “The return on that investment is what matters.”

That’s one reason why the focus on data has to come from the very top of the organization, he said, pointing to the example provided by Barack Obama eight years ago during his battle with Hillary Clinton for the Democratic nomination. “The man himself insisted on the central role for data,” said Rach. “Without that emphasis on data there is no way he was going to beat Hilary Clinton.”

Szymanski offered one more warning, against companies believing that their own in-house data will provide all the information they need.

“What we have observed at YouGov is a pattern of tunnel vision: ‘We have so much internal data on our customers that we don’t need anything else.’ One problem with that is that the data is focused on existing customers rather than consumers. Another is that consumers are also people—they have life outside of our products, in fact most of their lives are lived outside of our products—and most data reveals relatively little about those lives.”