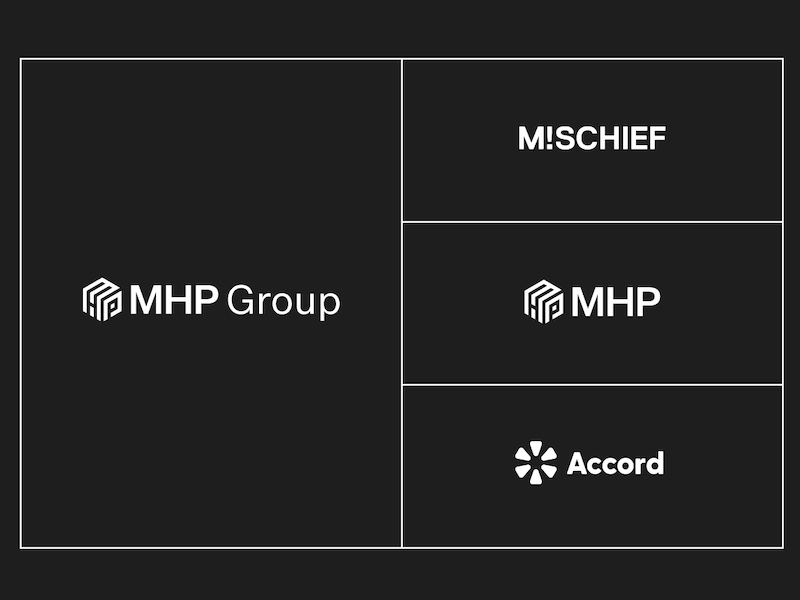 The agency has introduced the new umbrella name for the MHP, Mischief and Accord brands in preparation for further growth and acquisitions.

LONDON — MHP Mischief has rebranded as MHP Group, a new umbrella name for the MHP, Mischief and Accord brands in preparation for further growth and acquisitions.

Corporate heavyweight MHP and creative consumer shop Mischief had worked together as one agency with two brands within Engine Group since 2019. The leadership team resisted plans to rebrand as Engine Communications, pledging to keep both brands, and the agency has been known as MHP Mischief since Engine was acquired by Next 15 in March this year.

The three brands within MHP Group also include leadership consultancy Accord, which MHP Mischief co-founded as a joint venture to tackle polarisation in May this year. The three brands will continue to go to market as specialist teams, or combine depending on client needs.

As part of the rebrand, the agency group has introduced a new marque that represents its integrated approach, and a new website. MHP and Mischief have updated their brand identities, with the Mischief logo being refreshed for the first time in its 17-year history.

The move paves the way for MHP Group’s future growth strategy as an integrated communications consultancy, which specialises in the application of behavioural science to solve complex challenges.

At the time of the Next 15 acquisition, MHP Group, which currently has 200 consultants and has offices in London and San Francisco, set out plans to double in size through organic growth and acquisition while expanding internationally and building new specialist capabilities.

MHP Group CEO Alex Bigg said: “Our work ranges from supporting life-changing advances in health and advising boards on special situations, to articulating brand purpose and delivering cut-through creative campaigns. By creating MHP Group, we are giving our individual brands the freedom to offer deep specialist support, but also reflecting the fact that, increasingly, these worlds overlap and require a truly integrated approach.”

Mischief managing director Charlotte Brooks, who was promoted into the role last month as Greg Jones departed to join Smarts as European CEO, added: “This is an historic moment for Mischief, which has grown from an earned-first agency into a creative team delivering disruptive campaigns across every channel. Our new look reflects this evolution.”