Please refer to our Privacy Policy for important information on the use of cookies. By continuing to use this website, you agree to this.
Home Latest Nike's Colin Kaepernick Ad Reignited The Conversation. Now What? 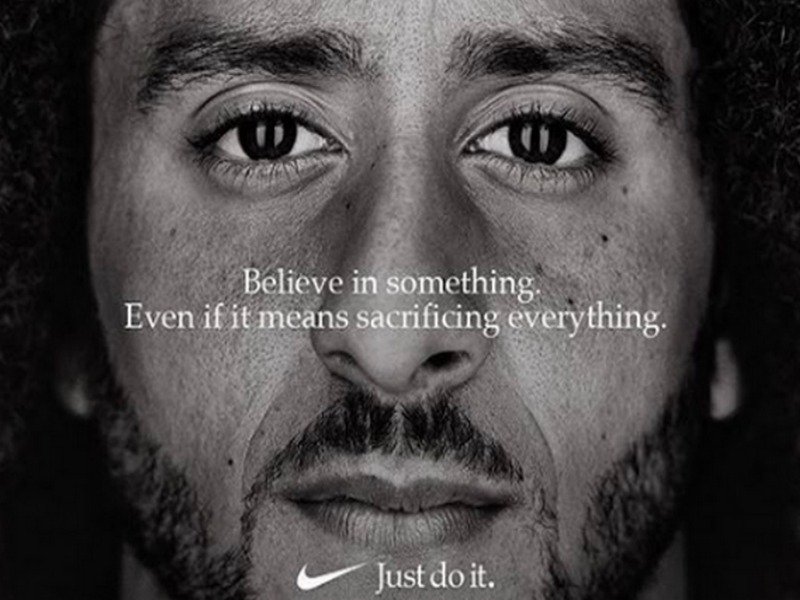 Nike is well placed to take the kind of stands that are increasingly required of brands in today's polarized world. But will the company go beyond provocative advertising?

In a polarized world that increasingly requires brands to take sides, it is hardly surprising that Nike — with its reputation for standing for something more than just selling running shoes — has gone bold in making Colin Kaepernick, the quarterback whose on-field protest against racial injustice launched the “take a knee movement,” the face of its latest high-profile ad campaign.

As Nike no doubt expected, Monday’s news that Kaepernick would be among the athletes featured in its “Dream Crazy” campaign set something of a backlash in motion. The company’s stock dipped (before online sales jumped by 31%). #BoycottNike lit up the Twittersphere, where President Trump unsurprisingly weighed in. And then there were those wildly fervent opponents who decided that lighting their Nike shoes on fire was a good thing.

But, when all the noise dies down, most believe that Nike will come out ahead. “I think calculated is the operative word here,” said Huge VP of strategy Mike May, adding that Nike “doesn’t launch an initiative that isn’t going to have far-reaching impact without a lot of calculating and scenario testing.”

“The reach is going to far outshadow any losses from customers who are turning against the brand,” May said. “They end up catapulting the brand into the much larger conversation.”

Nike’s mastery is in being able to do that at a time when, between heightened volatility and the lightning speed and influence of social media, a wrong move can tank a brand. That success, marketers say, goes beyond Nike being, well, Nike — the world’s most valuable apparel brand, with lucrative deals with mega-brands in their own right, including the NFL.

It's also due to Nike's relentless ability to marry product and purpose, which has found renewed vigour in its decision to put Kaepernick front and center of the new campaign — tied to the 30th anniversary of the brand’s 'Just Do It” slogan.

Aligning with gutsy athletes was Nike’s thing long before it was in vogue. Indeed, the brand's decisions over the years suggest that its support of outspoken athletes and its commitment to the integrity of sports is hardly disingenuous. We’re talking, after all, about a brand that stood by Tiger Woods when other sponsors dumped him for serial philandering, but swiftly ditched Lance Armstrong for doping.

“They have always been a brand that lives its convictions,” said Scott Beaudoin, who heads Fenton’s CSR-focused group Actio. “Using the power of sports to move the world forward is very in line with its purpose and its equity.”

Nike's strategy is one thing; but the devil, as the company well knows, is in the detail — which it handles with exceptional precision.

Though the uproar would make you think otherwise, the Kaepernick ad doesn't even mention Kaepernick’s protests, nor his role in spurring the recent wave of athlete activism in motion by kneeling during the national anthem at pre-season games. That Kaepernick, who narrates but isn’t seen in the spot until near its end, hasn’t been signed by a team since he became a free agent last year (triggering his collusion lawsuit) is only vaguely alluded to when he says, “Believe in something. Even if it means sacrificing everything.”

It is a slogan that could equally apply to Nike's own commitment to controversial issues; the company demonstrated similar prowess in its response to the French Open banning Serena Williams' catsuit last month.

Yet perhaps the greatest testament to Nike getting this one right is that its ad, even before it dropped, elicited a supportive (albeit tepid) response from the NFL, which has spent two years wrestling with the issue. (In May, the league adopted a new policy saying players have to stand for the national anthem on the field or wait in the locker room.)

A statement said, “The National Football League believes in dialogue, understanding and unity. We embrace the role and responsibility of everyone involved with this game to promote meaningful, positive change in our communities. The social justice issues that Colin and other professional athletes have raised deserve our attention and action.”

“It’s a good step forward,” said Joe Favorito, a sports marketing vet who’s handled communications for the New York Knicks and Philadelphia 76ers among others, adding that the NFL could easily have kept quiet or condemn the campaign.

Altruistic? Perhaps. But, as Favorito said, the NFL and Nike have a lucrative business relationship, and “both sides need to make it work well.”

Additionally, the NFL has more than just player protest to deal with, considering the league is facing a multitude of challenges — lower TV ratings, school districts cutting football programs and the long-term damaging effects of concussions sustained while playing the game among them. “This is a commercial venture,” Favorito said. “All the leagues have to stay ahead of the curve in engaging fans and making sure your brand partners are getting a big ROI.”

Nike also has  skin in the game, as it hasn’t been that long since the company’s ill treatment of women was splayed across the news. Whether the latest campaign helps reduce any of that reputational damage remains to be seen, but it does mean that Nike will continue to attract more scrutiny than most.

“Nike chose a very timely and topical way to make a powerful statement on human rights. Now that they’ve gone all-in on this stance, it will be very interesting to see what other measures they’ll take as a good corporate citizen to demonstrate consistency on this topic across-the-board,” said Joe Flores, who co-leads MWWPR’s sports and entertainment practice.

“This extends to ensuring the company will stand by its responsibility to employ fair treatment of workers internationally and domestically. From this point forward, expect any action or inaction involving Nike and human rights to be even more magnified and subject to scrutiny – particularly if there’s inconsistency,” he said.

Which suggests that the real impact of the ad — beyond creating buzz for Nike — may only be felt if it leads to something bigger. “They have certainly opened up the dialogue but that’s only half the battle,” said APCO Worldwide’s Katie Sprehe, who specializes in corporate reputation.

“If Nike is leading on this issue, and certainly is getting out in front of it, then it is about who can they bring to the table, whether that is the NFL … other sports apparel companies … NGOs,” she said. “The next question for Nike is, ‘What are you going to do next?’”