Please refer to our Privacy Policy for important information on the use of cookies. By continuing to use this website, you agree to this.
Home Latest One Third Of Industry Have Had Mental Health Issues, PRCA Census Finds 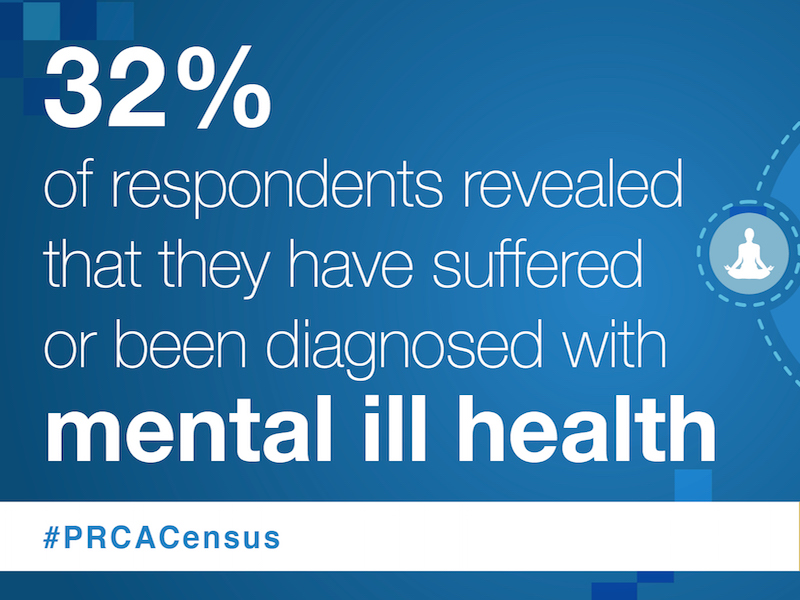 One Third Of Industry Have Had Mental Health Issues, PRCA Census Finds

The annual survey also found that while the gender pay gap has shrunk, salaries are down 7% and there has been no improvement in diversity.

LONDON — The PR and Communications Census 2019 has found that almost a third of the UK industry – 32% – say they have suffered or been diagnosed with poor mental health.

It was the first time the question has been included in the survey of more than 1,200 practitioners, produced by the Public Relations and Communications Association (PRCA) with market research agency Norstat, and the result is notably higher than for the general population: mental health charity Mind estimates that 25% of people in the UK experience some kind of mental health problem every year.

At the same time, PR professionals continue to be overworked: half of the industry works around 10 hours more than their contracted 35 hours a week, with senior employees across the industry are most likely to work overtime, some putting in more than 60 hours a week.

Around 32% make work-related calls and emails outside of office hours, down from 41% last year, and while 69% work flexibly, including flexitime, working from home and shorter working days, 31% of the industry has no flexible working arrangement.

But the ethnic make-up of those employees is almost unchanged since 2018, with 89% of respondents being white, although the census report observes that the younger cohort tends to be more ethnically diverse. There’s also little movement in educational background, with 80% of the industry being graduates, and nearly a third of the industry having had a private school education.

PRCA director general Francis Ingham said: “In too many areas, we are not making progress. There has essentially been no movement on diversity. Mental health is a huge issue, made all the worse by often crushingly long hours. And incomes have declined for agency practitioners, in-house ones, and freelancers alike.”

He added: “For years now, talent has been the number one headache for PR leaders. Declining salary levels will only compound this. Our long-standing belief is that evaluation is the answer to this problem. Until we can prove the value that we bring, we will not be able to charge the price that we should, and so to pay people the amount that they deserve.”

In terms of evaluation, impressions are now the preferred metric, with 16% of the industry using this method. The use of AVEs has dropped from 12% to 7% this year, but 26% of PR professionals still say they do not use any PR evaluation methods.