Please refer to our Privacy Policy for important information on the use of cookies. By continuing to use this website, you agree to this.
Home Latest Open Banking Puts Fintech And Bank Comms Under Scrutiny 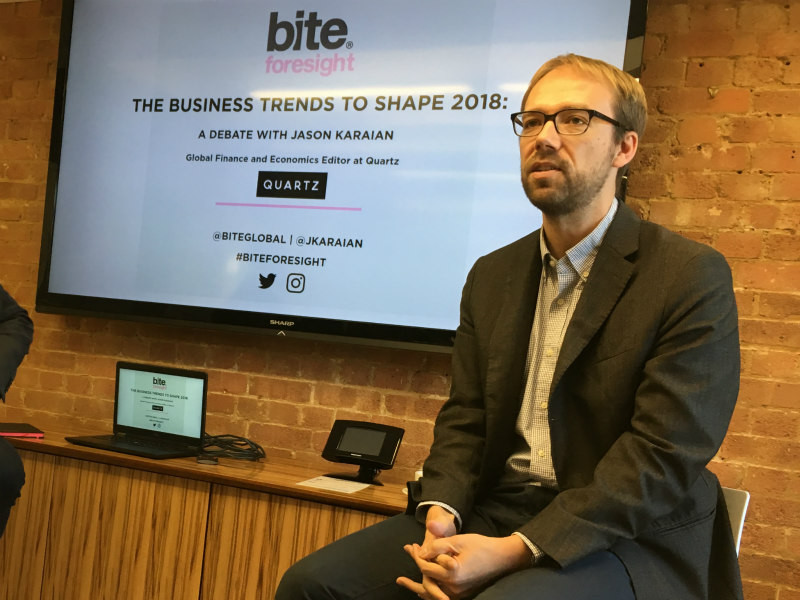 LONDON — The introduction of Open Banking could expose the communications divide  between incumbent banks and fintechs, according to a leading economics expert.

Speaking at a Bite Foresight business trends event this week, in a wide-ranging debate about cryptocurrencies, fintech, Brexit and Davos, Jason Karaian, global finance editor of Quartz, said Open Banking (aka EU directive PSD2, which forces the big banks to open up their data) would have a huge impact on the financial sector in 2018. And he told the Holmes Report there was already “a sharp difference between comms people who get digital media and those who still work in the old ways.”

He said the dominance of social media in the way journalists now work gave younger comms professionals at start-ups an advantage: “Challenger brands have always been more open, and they are more plugged in to the social web. The big campaign model and having one spokesperson doesn’t apply anymore: there is a much more open and candid conversation happening on social media.”

The flipside of this could be a relative lack of experience in handling a potential regulatory or other crisis, however: “The risks are greater for younger companies. My advice is to remain open and honest to the extent that they can. If there is a big crisis, we expect statements and information a lot more quickly and we’ll be reaching out to other sources on social media, so they can’t necessarily control the message.”

Whatever the size of the company, Karaian said the communications and marketing teams most useful to journalists covering business, finance and economics are those that are “always available, open to talking with candour, and can talk about more than just one thing.”

Karaian also noted that the finance industry was likely to go through yet more transformation in the near future: “There’s definitely a shift in how people are thinking about money because of fintech and PSD2.

“In theory, Open Banking could lead to Amazon, Facebook and Google becoming players in the finance world. The previously defendable moats around the big banks are draining, but a lot of fintech companies use Amazon web services for cloud data processing, so if Amazon itself wanted to move into consumer finance, a real frenemy situation could arise. And think about payments through Facebook Messenger. It’s all on the table. Finance is more exciting than it has been for a long time.”