Please refer to our Privacy Policy for important information on the use of cookies. By continuing to use this website, you agree to this.
Home Latest Parkland Survivors: 'We Have To Take Them Down' 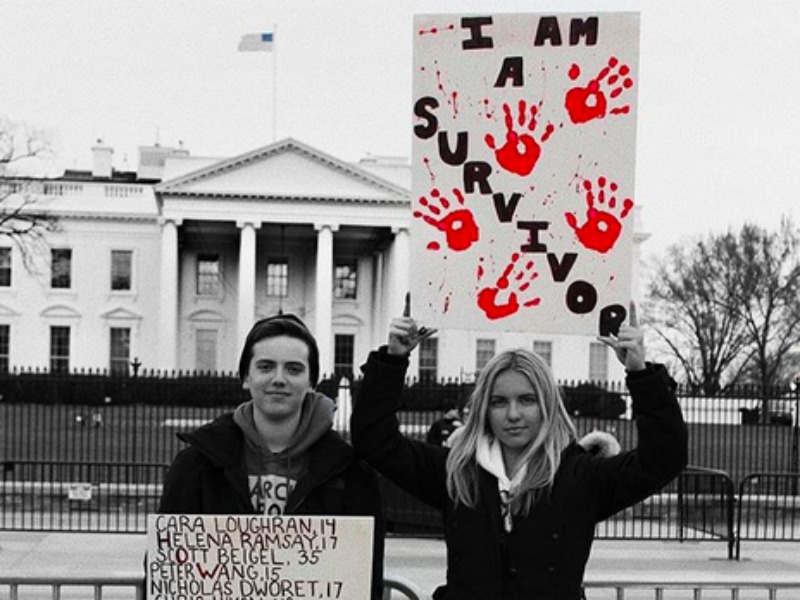 Parkland Survivors: 'We Have To Take Them Down'

Three teens who survived the February mass shooting at Marjory Stoneman Douglas High shared light on how they found purpose in the aftermath of tragedy — and got results.

CANNES — February 14 started out like any other day for Parkland, Florida high schooler Madison Leal, except, being Valentine’s Day, she noticed her classmates seemed particularly happy, many toting around gifts like teddy bears and chocolates.

That all changed around 2:20 p.m., however, when the second of two fire alarms that day sounded “which pierced my ears as my gut told me something was just not right,” said Leal. Then came the code red, the school lockdown (which Leal spent hiding in a dark classroom corner), and the shooting rampage that left 14 Marjory Stoneman Douglas High School students and three adults, all teachers or coaches, dead.

“After February 14, I really didn’t know where my next step would be,” Leal said, explaining that in the immediate aftermath of the shooting she didn't have the wherewithal to leave her bedroom.  “But it soon became clear that every step I take in my life will always be for the 17.”

Leal and two other survivors, Kai Koerber and Sam Zeif, spoke Friday at the Cannes Lions International Festival of Creativity to share their stories of turning tragedy into action — and getting results.

Within weeks of the shooting, Leal, along with fellow survivors, successfully drove the kind of change that has long eluded gun control activists — stricter state gun laws and major corporations cutting ties with the NRA — garnering large-scale support largely by tapping the social media prowess that is, more or less, innate to today’s teens. Within six weeks, the March for Our Lives in Washington they organized drew hundreds of thousands, and spurred student protests around the country.

The way the three panelists (two rising seniors and a new graduate) explain it, their actions have been propelled by senses of purpose they found after living through a massacre in a city that, just the year before, was named the safest in Florida.

While united in cause, each of the three student speakers have rallied around that idea in different ways.

Koerber, for instance, has found his “purpose” in promoting mental health awareness, lobbying for the creation of school curriculum surrounding the subject so individuals, like the shooter Nikolas Cruz, can be identified and treated before harming others.

“This was a kid that was reported multiple times, and all these check and balances had been bypassed. No one wanted to pay attention,” Koerber said. “We need to look at mental health issues, this is something that can be taken care of. The sooner we recognize that the sooner we recognize peace in America and across the world.”

Zeif, who lost his best friend in the rampage, has started a non-profit, called Change the Ref, to promote change through the political process. “Our main goal is to empower and education on how to save our country and change the ref in Washington, DC, the ref being Donald Trump,” he said. The organization currently is focusing on politicians who take money from the NRA.

“Our goal is to really change America and make it safer for everyone. And that’s not going to happen until you change the people who are keeping (that from happening),” he said.

Leal and five friends created the group Branches for Bravery, which at the moment is focusing on planting a tree and creating a memorial in memory of the Parkland shooting victims, and then plans to expand to do the same in other affected communities as a symbol of sharing resources and dialogue. “Parkland wouldn’t be where it is today without the love and resources we’ve been given,” she said.

Speaking to a room of Cannes attendees, many of who sway public opinion for a living, the students urged their audience to rally behind the movement, and call out businesses that are impeding it by supporting the NRA.  “We have to take them down,” Leal said.

And the message has to have impact, Zei said. “I don’t want a sign that says please vote now so we can stop school shootings. I want a billboard that has a picture of my friend’s beautiful face that says, ‘I was murdered 20 minutes from here. What are you going to do about it?’”