Please refer to our Privacy Policy for important information on the use of cookies. By continuing to use this website, you agree to this.
Home Latest PBS Frontline: Storytellers Must Embrace Technology To Remain Relevant 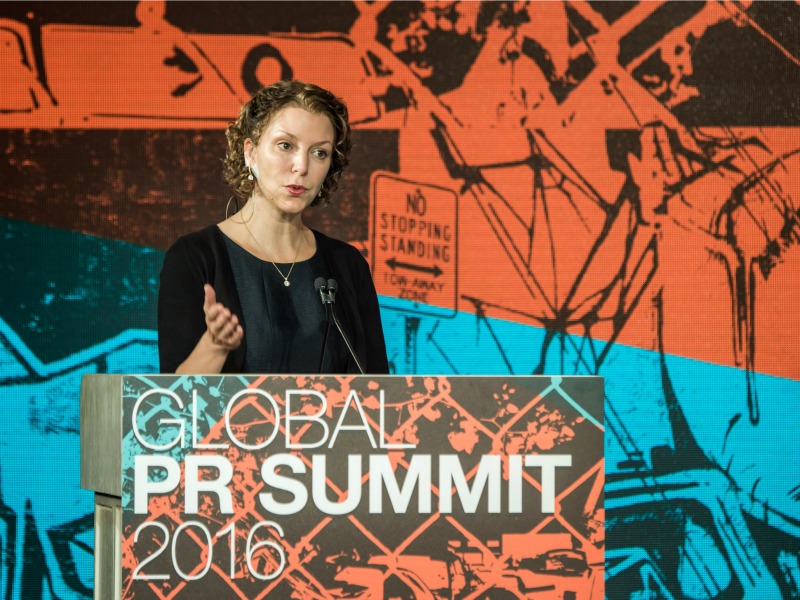 Raney Aronson-Rath tells PR industry at PRovoke16 Summit that new forms of content are vital to connecting with younger audiences.

In an illuminating session moderated by Burson-Marsteller CEO Don Baer, Aronson-Rath illustrated the various ways that Frontline has embraced technology in order to connect with younger audiences. Just three to four years ago, noted Aronson-Rath, the notion that audiences would time-shift or seek out your content on other platforms was viewed as a provocative one within the TV business.

"Increasingly, we are embracing technology," said Aronson-Rath. "I’m a huge advocate of this because I see what it does for our storytelling. What I want to do is engage with new audiences so that we remain vital. "

In particular, Aronson-Rath pointed to the impact that immersive techniques such as virtual reality have had on Frontline's journalism, in an era when "it’s hard to get people to care about things like famine in South Sudan."

"The idea of television is being disrupted," said Aronson-Rath. "You really have to pay attention to the new frontiers of storytelling. Now we find that virtual reality is one of our most vital areas of experimentation. There’s a space at Frontline for immersive storytelling."

Aronson-Rath's hope is that these new techniques, often involving virtual reality, will encourage younger people to "fall in love with journalism."

So far, Frontline's efforts have paid off. 'The Choice', Frontline's election special, saw a 600% increase in viewership on its digital platform this year, thanks to an outreach campaign that was completely digital.

"We have tripled our audience in the past couple of years," said Aronson-Rath. "More engaged, more diverse and younger than ever."

However, Aronson-Rath cautioned against the perils of editorial and native content overlapping on digital channels. "The challenging part is when you’re not sure what is journalism and what is advertising or PR work," she said. "If you don’t have investigative journalism you have a problem in the world.

"On the other hand," noted Aronson-Rath "you want people to know about your work," so a collaborative approach to marketing is required. "The key is having the conversation."