Please refer to our Privacy Policy for important information on the use of cookies. By continuing to use this website, you agree to this.
Home Latest 'I Love That We’re Head On Against Ad Agencies,' Richard Edelman Tells PRovoke18
Maja Pawinska Sims

'I Love That We’re Head On Against Ad Agencies,' Richard Edelman Tells PRovoke18

Richard Edelman headlines the Independent PR Firm Forum on the challenges and opportunities for independent agencies, as they take on rivals from holding groups and other disciplines. 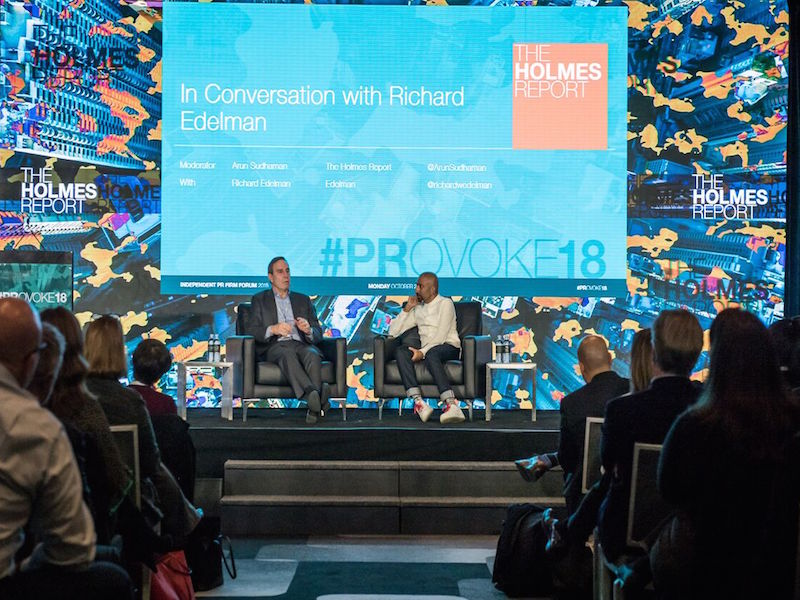 Arun Sudhaman (AS): You came to our first conference in Prague in 2011, when Edelman was ranked third in the world. It has since become the world’s biggest PR firm. To what do you attribute Edelman’s growth and rise over the past 15 years, relative to its rivals?

Richard Edelman (RE): We stayed independent – that’s it. Holding company-owned firms slashed staff, but we slashed our profits. We don’t have debt, we don’t have shareholders and we don’t pay family dividends, so we sucked it up. We were ready when the recovery came because people were loyal to us because we had kept them on. We were also able to invest in digital.

AS: Recent years have seen a different picture emerge: we’ve seen growth as tracked by our Global Rankings slow down at the bigger end of the agency spectrum to low single-digit growth and your firm has not been immune. Is this the new normal?

RE: We have a new set of competitors. We’re still competing with Weber and others, but we’re also competing with BBDO and other ad agencies now we’re in the business of creative and digital. We’re in the Premier League now and we have to play like that. You can’t just have a good idea, you have to prove it’s going to work, do your research, and have new forms of execution. We’re still like a sophomore in college in terms of our ability to completely execute, but that’s the dimension we’re now competing in.

AS: We often hear that this era has the biggest opportunity for PR firms to capitalise on the central importance of earned media, yet we’re still seeing a slowdown in the bigger firms.

RE: I wouldn’t say it’s a golden era just because earned is more important than ever. I would also say the issues that companies have to deal with are more complex. When two-thirds of consumers expect brands to take a stand, who’s better to express a brand’s stand, us or an ad agency? Ad ideas are simple. Our ideas are best expressed through, for example, working with clients to talk about how they are a firm that cares about their people and thereby get customers who would be in sync with that. It’s totally different from simple.

AS: You made some big bets that paid off in terms of powering Edelman's growth. What are the bets you are making now in terms of growth for your agency over the next five to ten years?

AS: How does that fit with the notion that PR firms can try and tap into CMO budgets?

RE: If you’re part of a big holding company like Publicis it’s tough, because they keep subverting their PR brand. They will have some success with clients who want to buy a solution, but we have to explain there’s a difference between PR that’s subsumed in an organisation and PR that takes the lead. Ad agency-led teams will have a simple creative supported by PR, while we’re the ones who are going to get brands to stand up for things that matter. Reputation and brand are complicated, and we excel in the complex.

AS: To get to that point, you hired 600 creatives and planners. Why?

RE: Because we have to compete with BBDO and Digitas and have the best ideas. These are not people coming up with ad creative, they are coming up with creative that is earned at the core and social by design. It doesn’t mean PR people can’t still have ideas, but it’s important to have creatives who think visually, who think short form, who think in a way marketing execs will buy.

AS: There appears to be a transformation of talent, going from a classic PR model to one focusing on specialist skills. Is it easy to underestimate the cultural aspect of that?

RE: Yes. There are three tribes: PR, digital and creative. The trunk of the tree is PR, and the others are branches. It’s a work in progress, but it will happen. The key thing is that we need to let creatives wear whatever they want to wear…

AS: At the same time as you’ve looked to transform talent at Edelman, growth has slowed. Do you see the two things as linked – that internal disruption is required for that transformation and that’s a cost that agencies should be aware of and be willing to bear?

RE: You make a choice with agencies – you can do vertical or horizontal. There’s plenty of room for everyone to stay in the PR space. For others, you get to a point where you need to hire creatives to get bigger budgets, and that’s a horizontal play. If you’re playing against the cold steel of Arsenal, you’ve got to bring your best game.

AS: Another thing we see with agencies when they are trying to transform is that the senior people who got them to point A, might not get them to point B. Is that something agencies looking to change should be aware of? Because some of the key architects of Edelman’s rise are no longer in the agency.

RE: The reality of change is that we’ve hired people from non-traditional backgrounds, but the culture of our firm is still all about Dan Edelman’s founding principles: everyone is an account executive, client service first, “we not me”. But we have to keep evolving, like a nation state: you have to keep growing, moving, take chances, bring in different and diverse ideas. Some of our best work comes from developing markets, because it’s liberated work somehow.

AS: We’ve seen a lot of consolidation in the holding groups. Why is that happening and what impact does that have on Edelman and independents in general?

RE: The BCW merger is smart because it gives them balance in their offer, and scale, and has also given us some good people. Growth matters: you have keep your best young talent and the only way to do that is to go forward aggressively. I don’t agree with what Ogilvy and Publicis have done because it diminishes what we do. But frankly I’m also thrilled. The people who are the best at those places, maybe they want to be with that group of buccaneers who still think PR is the lead discipline. So bring it. Tell Arthur Sadoun I said so.

AS: Acquisitions have helped Edelman – you’ve made several over the past 20 years, some with more success than others. What lessons have you learned?

AS: You don’t seem ready to slow down. What keeps you motivated?

RE: The business climate, the opportunity, the competitive pressure from ad agencies and digital firms. I do feel that what we do matters more now because of populism, trust issues and digital. I love that we’re head on against ad agencies: it was a fantasy and now it’s reality. It’s totally rejuvenating; I feel like Benjamin Button or something.