Please refer to our Privacy Policy for important information on the use of cookies. By continuing to use this website, you agree to this.
Home Latest PRovokeGlobal: “Comms People Are Held Back Because They Don't Always Understand Numbers” 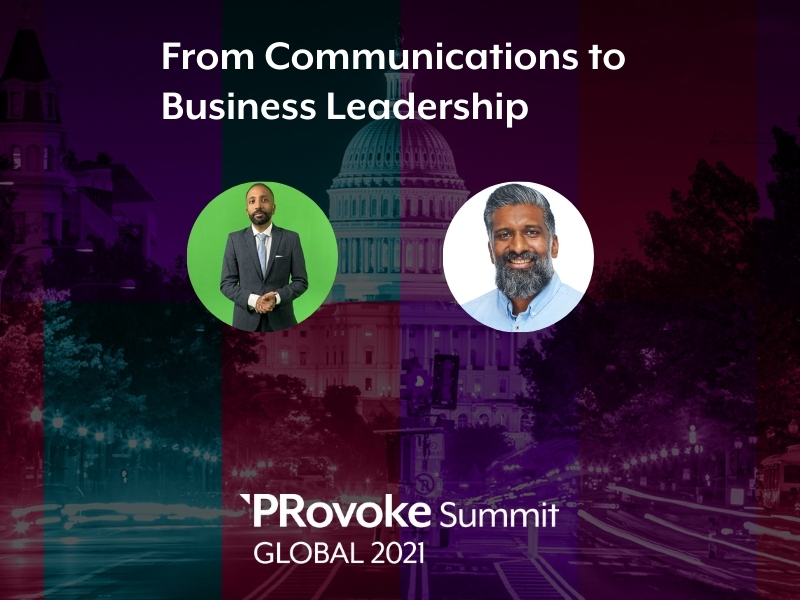 PRovokeGlobal: “Comms People Are Held Back Because They Don't Always Understand Numbers”

Clorox’s Jackson Jeyanayagam on his journey from agency to in-house to a business leadership role – and why communicators so infrequently manage client-side P&L.

The leap from communications to business leadership remains rare within major multinational corporations, but it is one that Jackson Jeyanayagam undertook when he became VP and general manager of Clorox's consumer business in 2019.

In conversation with PRovoke Media editor-in-chief Arun Sudhaman at the PRovokeGlobal Summit this week, Jeyanayagam talked about the lessons he has learned along the way, including the qualities communicators can bring to broader management roles within businesses, and the challenges they need to overcome if they are to make a similar shift.

Jeyanayagam said the major factor holding communications professionals back from client-management roles with P&L responsibility was a perception that they don’t necessarily understand the financial side of running a business, and remained best used to position a company in the right way or getting it out of a crisis.

“One of the biggest things holding comms folks back is being pigeonholed, and not being seen to understand the business and the topline,” he said. “I don’t think we do ourselves favours by sticking with the conversations we know. We’re not good enough at getting outside our area and thinking about what’s happening in the business rather than ‘you’re the message creature, who spins things for us and stops us getting into a bad place, but you’re not about the topline’.”

Jeyanayagam said the fact that communications professionals were not seen as drivers of business value was not easily fixed, given this perception that PR and business acumen did not go hand in hand.

“Some comms folks just love doing comms, they love the role they play and the influence they can have across the board. Others want to get into a general marketing role, leading to CMO, and others want to get into business roles as CEO or chief of staff. But one of the biggest things is that we’re not seen as understanding the numbers.

“Every time someone says ‘Oh, I’m a PR person, I don’t understand numbers’ it sets us back – it’s not true that we can’t connect the dots and drive the business, and it moves us further away from our potential to be seen as a business leaders.”

And Jeyanayagam said demonstrating greater understanding of the wider business also made communicators better at comms: “Understanding where the business is going and having that context as we talk through ideas means we can think about things not just from a PR perspective but around [areas like] shortages, supply chain challenges, global issues that may have an impact. If you pay attention to the numbers and dig into the P&L, it will change the conversation in the room and in the C-suite with executives.”

However, Jeyanayagam said the increasing importance of content as a driver of business gave communications professionals a huge opportunity to make a closer link between PR activity and business value.

“Over the past 10 years, content has gone from an impression driver into e-commerce. There’s no way to build and scale an e-commerce business in any vertical without a strong content strategy to drive conversation at the bottom of the funnel, and I would argue comms and PR folks are in a good position to drive all of that, from an SEO standpoint to cost of acquisition,” he said.

“This is a massive moment for comms people to say there is value in organic content that gets a lot of shares and engagement, through media or influencers, and PR is one of the biggest drivers of that. Everyone is trying to work out how to build their brand and get more traffic – e-commerce has become the primary channel in Covid, every business is now in e-commerce, and if we’re driving the conversation and understanding the power of organic content, businesses need PR. It’s an opportunity to get even closer to the P&L that comms should be driving, and to bridge that gap.”

Jeyanayagam said in-house communicators could also broaden their influence rather than limiting their role by having a greater understanding of the businesses and industries they worked in. “It’s so critical for corporate comms to not only have a line in to marketing, but into product teams, R&D teams, and the supply chain, which is now itself an opportunity for every business to rethink. Looking at all these pieces, comms connects the dots better than any other function – and if we get closer to all the functions, that also sets you up to be a great business leader.

“It gets comms away from being the guys who we bring in when there’s a crisis or a big launch or to make a mess less messier. There are opportunities to be far more proactive at a time like this when there are lot of variables: there’s lots of cash around, inflation is going up, there are not enough people for jobs and there are supply chain issues.”

Looking at whether the role and influence of communications had been elevated during the pandemic, Jeyanayagam said, contrary to many studies and opinions, that he hadn’t seen the perception of the comms function itself rise, but he had seen the use of communications strategy increase. In other words, there had almost been a decoupling of the function and its strategy.

“A lot of businesses are starting to understand their business through a comms lens, and good CEOs and leaders have adapted to thinking about things in a more thoughtful way. I don’t know if we have been elevated, and I don’t see executives thinking the first thing to do is talk to the head of comms or their agency, but I see a lot of comms strategy and thinking at the C-suite level.”

In terms of the biggest challenges for communicators in making the shift to a P&L role, Jeyanayagam drew on his own experience, moving from agencies including WE Communications and Taylor, into his first in-house role at Chipotle, where he became head of digital in 2015.

“I loved being in agency for 15 years, but getting in-house was a hard leap. In 2015 it was hard to go in-house. Once I got there, the doors opened – but it was seeing the waves changing, from PR, to social media, to influencers, to content, to digital, and that’s when I jumped, when I was not just a PR person.

“Once I got to Chipotle, I went from a comms person doing digital to a brand person doing digital. There was one brand, not loads of clients, and I had to understand every piece of it, including spending the first week serving in the restaurant so I could understand the impact of campaigns. That opened the door to more brand experience work, working on loyalty and e-commerce, and the CMO opportunity at Boxed only presented itself because I was so deep in digital, swimming with the current and taking advantage of where I found myself.

“I would advise everyone to take on roles that scare you if you want to make that switch from agency to in-house, and certainly to P&L ownership.”

Jeyanayagam also underlined the huge benefits of working in agencies before going in-house, and the lessons from agency life that directly relate to running a P&L: “At agencies you learn so many things about internal comms, client expectations and management. It’s all about setting expectations, then overdelivering – and that’s also the most important thing in running a P&L, internally and with analysts. On the agency side, if you’re good, you’re forced to learn to proactively communicate, get ahead of deadlines, manage clients and your boss.

Finally, Jeyanayagam had some thoughts about how PR agencies could evolve to meet the challenges of the future – circling back to his earlier comments about individual communicators understanding business better.

“My perception is that agencies are still so far removed from the realities of the business – its’ consumer launch versus a broader spectrum. If you can talk about our earnings and shareholders, when someone truly starts understanding the rise in commodities costs and labour costs, whatever PR, comms, content and social ideas you come up with will be grounded in the core of the business problem we need to solve.

“If you spent two hours watching CNBC or reading a couple of articles, and understanding the fundamental business impact, you can go deep into the brand to apply comms, social and maybe some other things that aren’t in my wheelhouse. Hard skills are overrated, but softer skills allow you to adapt and be versatile. They will enable you to be successful no matter what: adapt, learn, communicate, understand my business and understand the industry."