Please refer to our Privacy Policy for important information on the use of cookies. By continuing to use this website, you agree to this.
Home Latest PRovokeGlobal: Data Can Keep You Calm In A Crisis 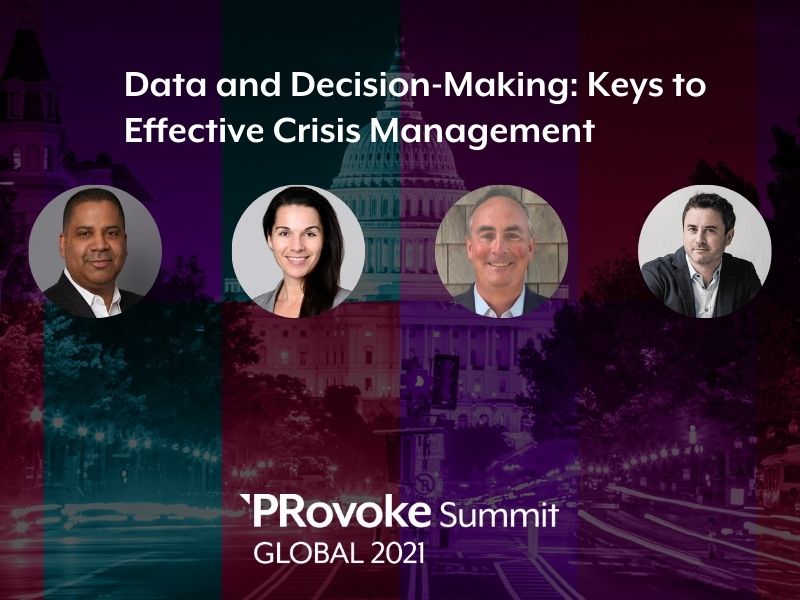 PRovokeGlobal: Data Can Keep You Calm In A Crisis

Real-time data can help communicators move beyond intuition when it comes to predicting how a crisis will develop, and give them more confidence in their decisions.

The emerging ability of communications professionals to access real-time data during a crisis can have several benefits—not least of which is helping managers keep calm when bad news strikes, according to a panel on “Data and Decision-Making: Keys to Effective Crisis Management” at PRovokeGlobal today.

Sponsored by BCW and moderated by Direct Impact president Drew O’Brien, the panel looked at the ways in which new technologies—and access to real-time data in particular—have changed the role of crisis managers.

“When I started there was very little in the way of data,” said Michael Estevez, BCW’s executive VP and managing director of public affairs & crisis, “and the PR industry as a whole was still wrestling with the whole issue of measurement. We looked at things like volume, sentiment and tone of coverage. We looked at circulation numbers. But we couldn’t track which individual publications or specific articles got traction or influenced additional coverage.”

Today, he said, the technology exists not only to answer those questions, but to predict the answers in advance.

“At the onset of a crisis, even if the questions are not explicitly asked, everyone wants to know the same thing: How bad is it and how bad might it get. Historically, there was no way to answer that question except by intuition. Today, we have tools—you still need intuition and judgment, but there is data in the first few hours of crisis that allows you to understand resonance.”

It is possible, Estevez said, to know quickly how many people are sharing negative stories on social media. “Shares mean people think the article or the issue is important.” Crisis managers can also see whether shares are increasing hour-on-hour—indicating that a story is gaining traction—or decreasing, suggesting that the crisis might just burn itself out.

That’s a huge step forward over some of the traditional ways of tracking a crisis. “Total reach is a lagging indicator,” he said. “It’s a big mistake to say that once we reach a certain volume of coverage or volume of shares, then we will respond. By that time, you’re already too late.”

Paul Quigley, co-founder and CEO of NewsWhip, one company that provides such data, said that real-time intelligence can help communicators make basic but essential decisions about their response to a crisis.

“We can answer questions like if there is a story on your company should you respond,” he said. “When companies are considering taking action, we can see what are the narrative elements that people are taking an interest in, and which journalists or influencers are getting the most traction, driving the story forward. And we can predict the trajectory of the crisis, so people can make decisions based on a predictive model.”

In addition, he said, by giving them confidence in their decisions, “Data calms people, which can be a huge benefit in a crisis.”

“Something might go viral but if that virality is not organic, it’s not really a crisis,” she said. “You need to understand where shares and likes are coming from, what the root causes are, and who the ‘patient zero’ is.”

She described a client who was facing a lawsuit from a small group of shareholders, and then saw a news story attacking one of its products, combining to drive the share price down.

“Was the report the root cause of the crisis? We needed to understand who wrote the report and why it spread,” said Ebadi. “In fact, the report had gone viral but we noticed that the virality was inorganic, it was being spread by the people who had written the report or were closely associated with them. It was only after it began to gain traction in the market in general that it began to affect shareholders and that’s when the stock price began to fall.

“In this case we had to understand the correlation between the report and the share price and we had to know where it was coming from. Once we did, we could give the client enough information to show the inaccuracies in the report, which contained the crisis, and then they could go on the offensive against the bad actors involved, who had driven the report and were spreading the report and show that those bad actors stood to gain financially from the report.”

Estevez, meanwhile, recalled a case which involved a consumer products company whose CEO had made political comments that were controversial in Washington, DC, and found their way into discussion of the presidential campaign.

In another case, he said, there was a social media firestorm, generated by an activist group, that had a client company concerned. But closer investigation found that while there was a large volume of social media criticism, it came from a relatively small number of accounts associated with the activist group, and had not gained traction more broadly.

Yet even with the clear utility of real-time data, persuading companies to embrace the new technologies involved can be a challenge, Quigley acknowledged.

“It’s an organizational shift,” he said. “It’s a big change for communications teams and how they work. What we’ve found is that we need an organizational champion for this to happen. That’s the first step in bringing real-time data into the decision-making process.”