Please refer to our Privacy Policy for important information on the use of cookies. By continuing to use this website, you agree to this.
Home Latest PRovoke Media Names Latin America Consultancy of the Year Finalists 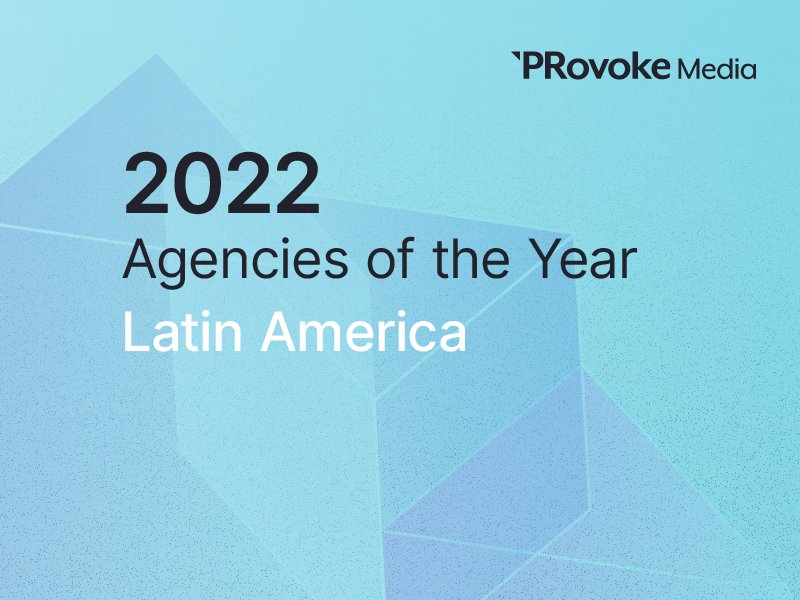 Seventeen firms from across Latin America have been named as finalists in this year’s Consultancy of the Year awards.

MEXICO CITY—JeffreyGroup, LatAm Intersect, LLYC, Porter Novelli, and Sherlock Communications have been named finalists for the 2022 Latin American Regional Consultancy of the Year award, one of four consultancy awards that will be announced at our Latin American SABRE Awards ceremony in Mexico City later this month.

The Latin American Consultancy of the Year awards will again recognize the region's best firms across geographic categories. In all, 17 firms — from giant multinationals to small local specialists — are nominated across the four categories. Slightly more than two-thirds of those firms — 12 out of 17 — are independents, and more than half are based in Latin America.

The selections are the result of an exhaustive research process that PRovoke Media conducts at no cost to the agencies involved. The in-depth analysis reveals that the region's firms are demonstrating a remarkable recovery from the Covid-19 pandemic, a renewed emphasis on workplace cultures and mental health support across the region, and a continued development of digital and other creative capabilities.

Analysis of all Finalists (and Winners from 13 October) can be accessed via the navigation menu or below:

Consultancy of the Year winners are announced and honoured at the 2022 Latin America SABRE Awards event, which returns in person to Mexico City on 11 October.