Please refer to our Privacy Policy for important information on the use of cookies. By continuing to use this website, you agree to this.
Home Latest PRovoke16: "Don't Advertise. Don't Push Products. Solve The Problem" 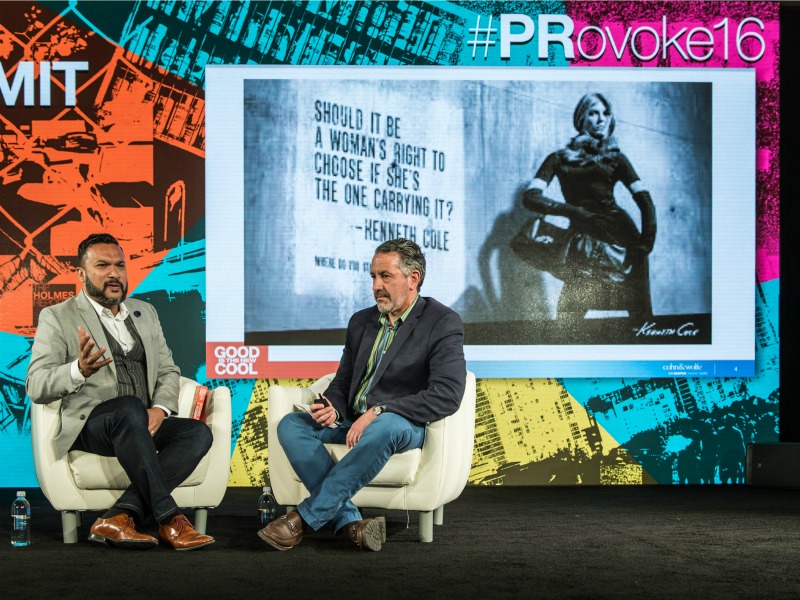 MIAMI — Brands that actually focus on solving real-world problems are more successful and in greater demand, with corresponding opportunities for their PR people, learned delegates at PRovoke16 today.

Afdhel Aziz, author of the book 'Good is the New Cool', explored the topic in an informative discussion with Cohn & Wolfe Americas president Jim Joseph.

Aziz pointed to Citi Bike as a good example of this phenomenon, where "brands are solving problems from the everyday to the epic." Another is Facebook, via its much-touted commitment to providing internet to unconnected areas around the world. "Their mission is to connect people around the world, but they help with the physical infrastructure as well."

Corporations, noted Aziz, are in a far better position to address issues such as these, given the wealth of resources at their disposal compared to nonprofits and governments. "So the answer to the question where the power and potential is — is corporations, and by extension in this room."

Cohn & Wolfe's own research illustrates that consumers want companies and brands to take a stand, added Joseph, with social activism now ranking as the second biggest driver of strength. That has benefited companies like Warby Parker and others, which consistently outperform the S&P Index.


"The people showing up for work believe in the mission of these companies," explained Aziz. "People buying products believe what these companies stand for."

For PR people, Aziz described this as a "golden opportunity... to rise to the top of the team of trusted advisors that a brand has."

"Figure out what that purpose is, and how do you clearly articulate it," said Aziz. "Strategy is story — if you can help a company articulate why it exists, that’s the biggest asset you have."

There are, of course, risks, particularly when you consider the experiences that Facebook and Starbucks have endured, on India and race, respectively. Regardless, said Aziz, companies often receive credit for "getting into the game" and being brave, as in the case of Skittles recently, can drive considerable change.

"It becomes about a business model rather than a CSR model," said Aziz. "Companies that are figuring that out are the ones that are going to survive for the next 100 years."