Please refer to our Privacy Policy for important information on the use of cookies. By continuing to use this website, you agree to this.
Home Latest PRovoke16: New Generation Of Firms Seeks To Avoid Predecessors' Pitfalls 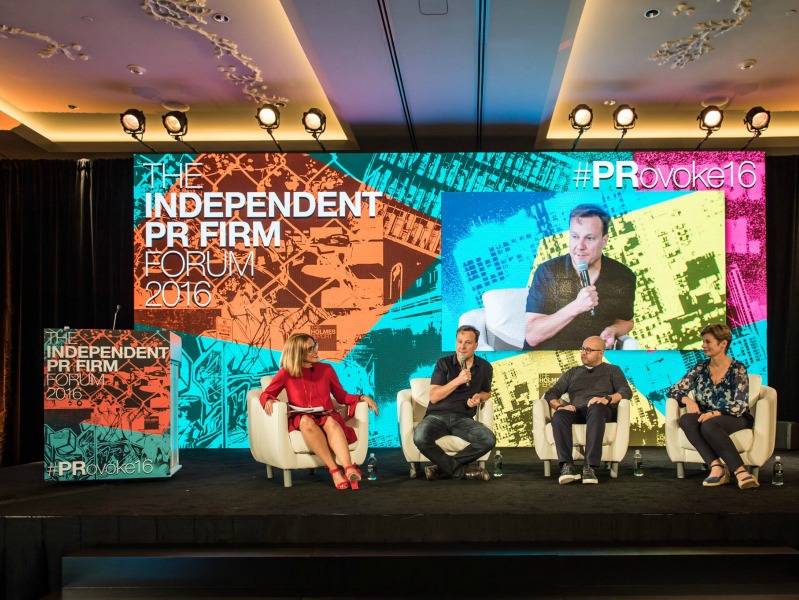 The next generation of independent public relations firms is focused on not making the same mistakes that they see older, more established agencies making.

MIAMI—The next generation of independent public relations firms is focused on not making the same mistakes that they see older, more established agencies making. That was one of the big takeaways from two panels at the fifth annual Independent Public Relations Firm Forum—part of PRovoke16—in Miami today.

The first panel, moderated by PR Council president Renee Wilson, featured the principals of three new firms in mature markets, while the second, led by Julian Boulding of IPRFF sponsor thenetworkone, featured four firms that are developing new models in emerging markets. Participants in both panels had worked either as clients or with large agencies before striking out on their own, and were anxious to correct what they saw as common mistakes.

Sean Garrett, former head of corporate communications at Twitter, launched the Pramana Collective a little over three years ago, and said, “I and my partners all had similar experience on the client side, and we all wished we could have partners who could serve in parallel to us and our team on big strategic initiatives. That was the kind of firm we wanted to create.

“We have an opportunity really shake things up, to reshape what people think about us. I am not a self-loathing PR person, I like what we do and think it’s important. We change the way companies do things. If more people did that, we would be a much more respected profession”.

Others—most of whom worked in big agencies—felt that they needed to address hierarchical structures and resulting lack of responsiveness, and the narrow traditional definition of what PR firms to do, developing more integrated offers and the ability to deliver them in a nimble, agile way.

There was a particular focus on new forms of content creation: “When we launched, we wanted to help client share their story wherever that story needed to be shared,” said Josh Rosenberg, who founded Day One two and a half years ago. “We have a core of strategists who are stewards of the brand story, and they work with people who are specialists in how those stories get shared.”

Jo Carr, who co-founded Hope & Glory in 2011, had a similar ambition. “We wanted to create content that got people talking. We do media relations, but the core of what we do is inventing things—sometimes we are creating events, sometimes we are creating products which we than get people talking about. We have a strong core team of publicists but we work with partners, innovators and inventors, who help us .”

“I think we are working on what is largely a blank canvas,” said Keri-Ann Stanton of Engage Joe Public in South Africa. “We are one of the very few independents working in South Africa, and if you look at the growth we have had over the past three years, it’s because we approach things differently and do things differently. We want to do something that matters.

In recent months, for example, “we have hired our first creative director, our first traffic manager, our first content manager.”

Nicky Wang, managing partner of Chinese independent Red Bridge Communications, has been very focused on creating a more integrated offer. “We have built up our digital and social teams. We work hard to make sure they are not siloed from the rest of the agency, but are very much embedded in the account teams. They are bringing in cutting-edge ideas but they are making sure that those cutting-edge ideas are not removed from the day-to-day reality of our clients.”

Aman Gupta of Indian independent SPAG has also been focused on acquiring or hiring new kinds of talent. “We are more focused on the public affairs and advocacy side of the business,” he said. “But we have established a dedicated brand working on the digital side. We have a new acquisition that is focused on content production.”

Sonya Madeira of Rice Communications—headquartered in Singapore but expanding into other Asian markets such as Myanmar—has taken a slightly different approach: “Things we cannot do ourselves we have a network of partners who can help us.”

She has also focused on technology as a source of competitive advantage: “We have five to 10% of our revenues committed to to new technologies that can make us faster and better. In some cases, we will monetize that later.”

Garrett, meanwhile, has taken a slightly different approach at Pramana, focused on deep counseling skills rather than content creation. “We don’t want to be an agency of record, to keep renewing that budget for year after year. We wanted to work for three to nine months on projects focused on very strategic objectives.

“We spend 12 to 20 hours interviewing internal stakeholders. Very often we get very divergent responses which usually means we have to focus on internal communications before we do anything externally. It’s the advantage of having been on the insider ourselves and understanding how these big businesses work. It’s a fairly deep process that we don’t see a lot of large agencies going through.”

The most common mistake identified by firms seeking to create new models was having the discipline to work only for clients for whom the new models were right.

“Sometimes we have said yes too quickly,” said Rosenberg. “We have seen some red flags, but the client or the assignment seemed exciting and we thought we could help them with their problem. We don’t do that any more, we have a much more rigorous new business and onboarding process.”

Garrett agreed: “Every single time we have gone into a new business opportunity and we did not pay attention to the red flags—a CEO who was very reductive about communications, for example—and we thought perhaps we could change the things that were red flags, we found we were wrong. We want to be able to say no to the things that are not right for us."