Please refer to our Privacy Policy for important information on the use of cookies. By continuing to use this website, you agree to this.
Home Latest PRovoke16: Verizon Chief Ronan Dunne's Public Relations Lessons 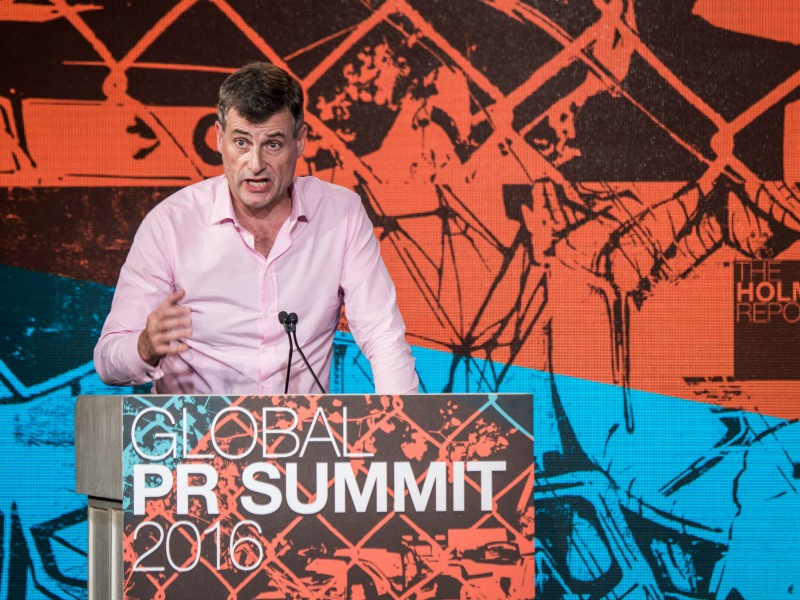 "Culture is what happens when nobody is looking," says new Verizon Wireless president at PRovoke16 Summit.

MIAMI — Ronan Dunne, the new president of Verizon Wireless, delivered an impassioned defence of the power of public relations at the PRovoke16 PR Summit in Miami yesterday.

Dunne, who recently took on the Verizon role after serving for several years as CEO of Telefonica's O2 business in the UK, noted that "narrative" is " he strongest asset you have in any organization."

That mentality, said Dunne, ensured that employees understood the organizations values and goals. "The next thing you do is enable them," he said. "Give them the tools to do the job. Then you liberate them to get to work and make a difference."

At Verizon, said Dunne, that approach would translate into a customer positioning that revolves around "creating amazing experiences every day through technology", rather than focusing on the company's superior network coverage. The difference, he noted, was relevance to customers.

Meanwhile, Dunne might also raise eyebrows with his views on the traditional hierarchy of stakeholder needs, which has typically put shareholders at the top of the tree. "There’s a nexus between customer, employee and shareholder," he said. "I just don’t think business works in a hierarchical model anymore."

Instead, Dunne believes that "shareholder returns are an output of a great strategy, brilliantly executed."

"Any strategy requires you to engage your great customers first," he continued. "So, it’s a nexus of the three. But if I had to put them in order it's customer, people, shareholders."

Dunne also noted that a long-term commitment to communications had helped O2 navigate difficult times, notably a network outage that left customers without connectivity for 19 hours. It also meant that the company was able to navigate its potential sale to Hutchison Whampoa, which ultimately broke down this year.

In both cases, Dunne said that his communications team were able to articulate questions for which the company's management did not have answers. In the case of the sale, these were: "Will I have a job, who will I be working for and what will be the name above the door?"

"We didn’t have answers to any of these questions," admitted Dunne. "So we thought, let’s make O2 impossible to ignore. By doing that we would influence all the stakeholders who would make three critical decisions. We told people, we can’t answer the three questions, but I can give you the tools to influence all three.

Dunne also played down the importance of social media, noting that it is often "several standard deviations away from the opinions most people hold."

"So don’t lose sight of the fact that it doesn’t represent the middle ground," he said, adding a warning to "understand that every conversation you have is a public conversation."

"Culture is what happens when nobody is looking," said Dunne. "Your unobserved actions will match up with your planned actions. Most people look for authenticity. They don’t look for perfection."