Please refer to our Privacy Policy for important information on the use of cookies. By continuing to use this website, you agree to this.
Home Latest PRovoke18: 'If You Don't Respond, Someone Will Respond For You' 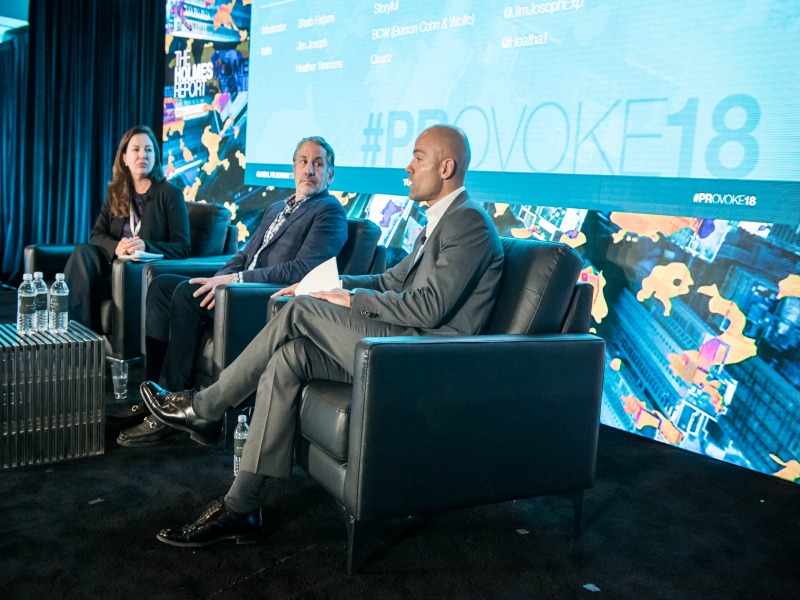 PRovoke18: 'If You Don't Respond, Someone Will Respond For You'

The proliferation of disinformation is forcing brands to stand up for themselves whether they planned to or not, according to a panel discussion at PRovoke18 Tuesday in Washington.

WASHINGTON, DC — With disinformation more rampant than ever, stakeholders from brands to news outlets have to be diligent in thwarting the spread of fabrications, which have emerged from the deep web to right in front of us.

“It’s become an absolute requirement to be on and monitoring and responding all the time,” said Jim Joseph, BCW global president of brand solutions, adding that, given the speed with which disinformation spreads, damaging falsehoods can wreak havoc on brands.  Pepsi and Huggies are two of the brands that have been affected by false allegations, he said.

“We need to be listening to what’s going on in our categories, our consumers and markets,” he said.

Joseph’s comments were part of a panel discussion on the prevalence and ramifications of false information — and what can be done to counter it — at the Holmes Report’s PRovoke18 Global PR Summit on Tuesday at the Watergate Hotel in Washington. Quartz White House correspondent Heather Timmons and Storyful CEO Sharb Farjami, who moderated the discussion, also participated.

Joseph noted that false information with detrimental effects for companies has long existed. Urban legend, for instance, long claimed that the actor who played Mikey in those 70s Life cereal commercials died after eating a deadly combo of the candy Pop Rocks and soda (The show ‘Mythbusters’ eventually debunked the story”).

What’s different, however, is that the advent of digital media and social platforms, and the speed at which information spreads across them, has amplified the amount, depth and danger of such content, giving it the power to hurt not just brands, but influence public opinion and everything from politics to social policy as a result.

“If you don’t respond, someone will respond for you. And their response is probably a lot more inaccurate than your own,” Joseph said. Moving quickly and transparently is essential regardless of whether or not you’re fully prepared to do so.

Timmons believes that the preponderance and real-life influence of disinformation stems, in part, from years of fake news reports being ignored. “I think when they go low we should have been kicking them in the knees,” she said.

Newsrooms, she said, are still in the throes of figuring out how to best combat the phenomenon, particularly since outlets like Facebook have disappointed as publishing partners, while also serving as a platform for the distribution of false information. Also troubling is the disregard politicians are showing for the truth, using and spreading false information to their advantage, she said.

“I think we have become numb to it, and I think it’s going to get worse before getting better,” Timmons said, adding that the threat of “going to a dark place” exists.

At the same time, however, stakeholders from company executives to employees are finding new kinds of voices, rising with power and purpose that they can use to cut through the noise and wield influence.

Whereas CEOs once feared taking stands that would alienate consumers, today company leaders are increasingly vocal on issues that align with their companies’ and employees’ values and purpose, Joseph said.

“The CEO has to be the voice of the brand, has to defend the reputation of the company has to on some level have to declare where they stand on things,” Joseph said, adding that having impact requires knowing when rallying around an issue is the right thing to do.